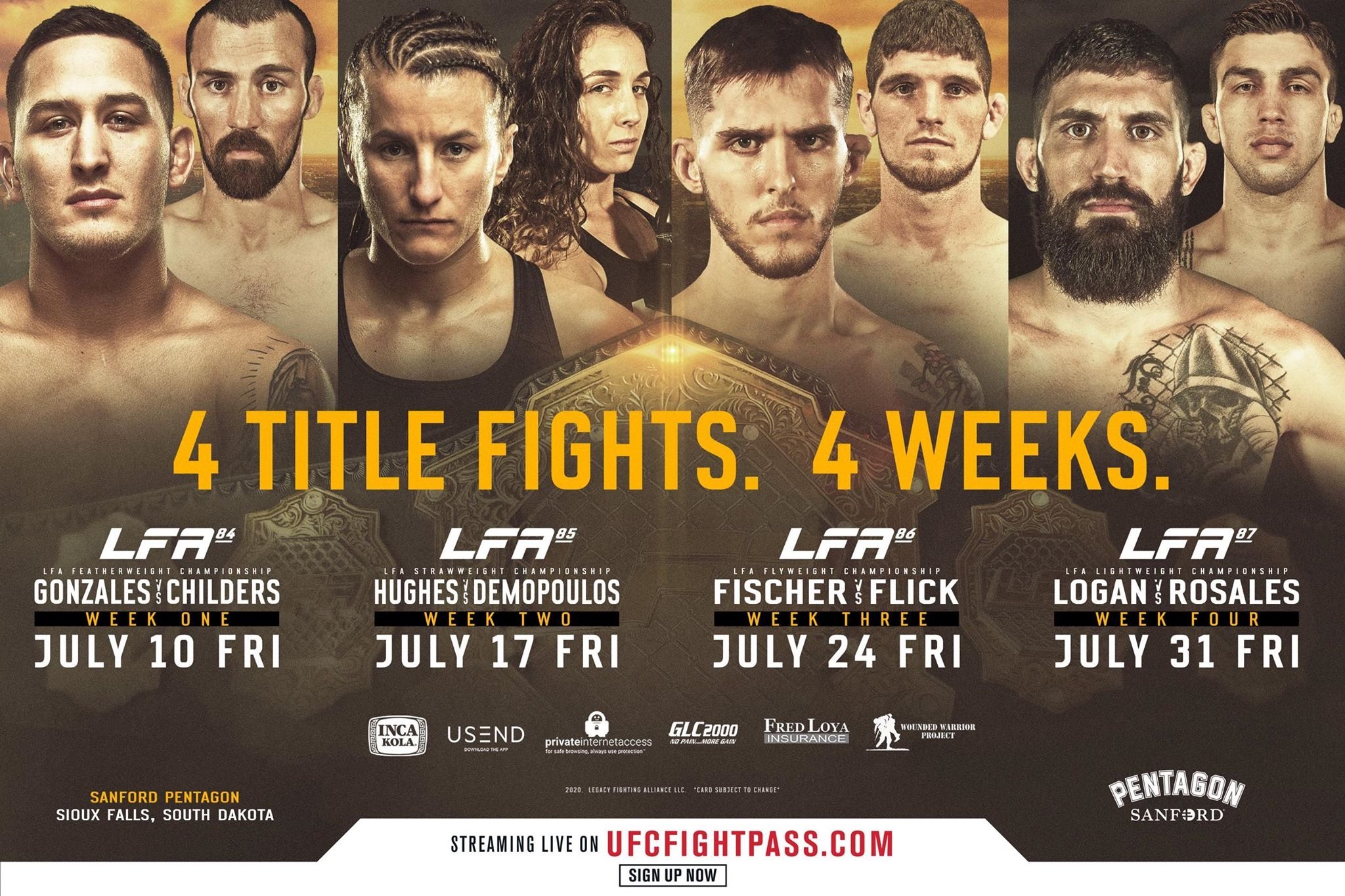 LAS VEGAS, Nevada — LFA and the rest of the world’s sporting events came to a halt in mid-March due to the Coronavirus (COVID-19) pandemic. However, the UFC became the first major sports entity to come back. They did so with a trio of events in May that took place in Jacksonville, Florida followed by weekly events that are currently taking place at the UFC APEX in Las Vegas, Nevada. All of these events have been closed-door events with a series of elaborate safety protocols that have been put in place for the fighters, cornermen, and event staff. LFA is now ready to follow suit by setting up a residency at the Sanford Pentagon in Sioux Falls, South Dakota. Starting on Friday, July 10th, LFA will host a closed-door event every Friday in July that will be available exclusively and worldwide on UFC FIGHT PASS® at 9 p.m. ET / 6 p.m. PT.

“I am excited to announced that LFA will be returning with live weekly MMA events in July,” stated LFA CEO Ed Soares. “We brought the first sanctioned MMA event to the state of South Dakota six summers ago and have a great working relationship with South Dakota Athletic Commission and Sanford Pentagon. This will allow us to set up a safe environment for our fighters and staff, while implementing strict Coronavirus (COVID-19) testing and safeguards to control and ensure a healthy LFA residency on our fight campus in Sioux Falls. Starting on July 10th, we will host four events in four weeks with each event featuring an LFA world title fight.”

LFA 84: Gonzales vs. Childers takes place Friday, July 10th. The main event will feature an explosive featherweight world title fight between the top two undefeated prospects in the division. Justin “J-Train” Gonzales (10-0) and Jake “The Workin’ Man” Childers (8-0) are the class of the of the 145-pound division. They have a combined record of 18-0 with gritty no-nonsense attitudes that match their blue-collar work rates and formidable fighting styles. The winner of this vacant title fight will become the top prospect in one of MMA’s deepest divisions, while also staking a claim as perhaps the top prospect in the entire sport. This will surely keep the 4th of July fireworks going all week.

LFA 85: Hughes vs. Demopoulos takes place Friday, July 17th. The main event will feature the inaugural women’s strawweight world title fight between two of the top women’s prospects in the sport. Sam “Sampage” Hughes (4-0) and Vanessa “Lil Monster” Demopoulos (4-1) are two of LFA’s most exciting fighters. They are both coming off standout performances for the promotion at LFA 81 in January. That night, Hughes picked up a dominant win over Lisa Mauldin at flyweight, while Demopoulos utilized her dynamic BJJ base to earn a gutsy comeback win over Loveth Young. These women have been on a collision course and are eager to claim the first 115-pound title in LFA history.

LFA 86: Fischer vs. Flick takes place Friday, July 24th. The main event will feature an exciting flyweight world title fight between the top two of the sport’s most battle-tested 125-pounders in Greg Fischer (10-1) and Jimmy Flick (13-5). This title recently became vacant when the most recent champion Brandon Royval was awarded a UFC contract. Royval promptly won his UFC debut and a $50,000 “Fight of the Night” bonus, which shows the standards LFA fans have come to expect from people who win this title. Fischer and Flick are eager to show they are ready to carry that torch. Fischer is the top flyweight prospect on the east coast, while Flick is 2-0 for LFA with a win over Johnny Bedford in the main event of LFA 16.

LFA 87: Logan vs. Rosales takes place Friday, July 31st. The main event will feature the highly-anticipated lightweight world title fight between South Dakota’s own Bryce Logan (11-4) and southern California stalwart Jacob “Lil Badger” Rosales (12-5). Logan and Rosales were originally scheduled to fight for the vacant LFA lightweight title on April 17th. That event was postponed due to the Coronavirus (COVID-19) pandemic. Logan and Rosales are two of the most popular fighters in the promotion, as they both got their start in RFA before the merger, and their urgency to claim divisional supremacy has never been greater. They finally get to fight for lightweight gold on the last night of July.