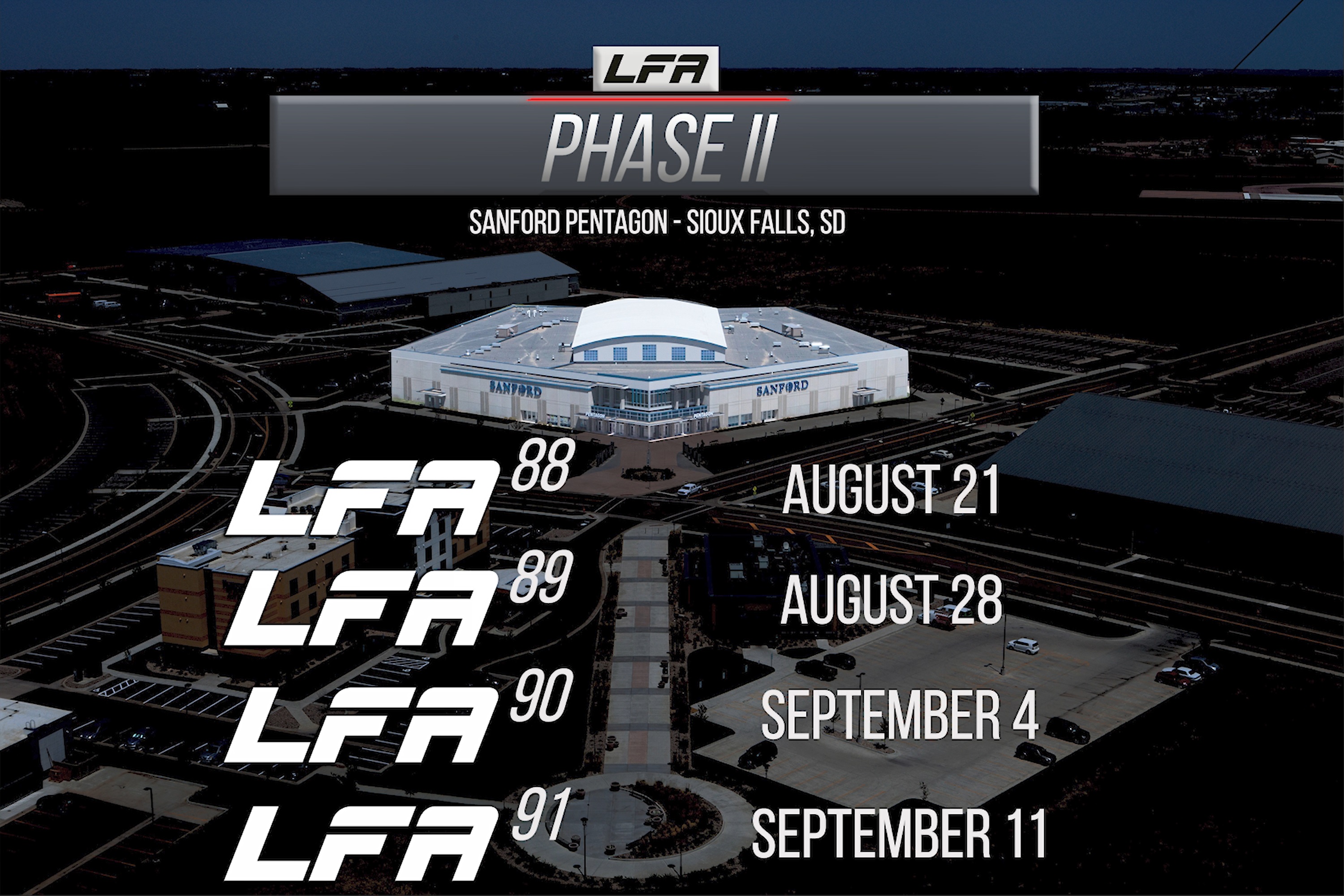 LAS VEGAS, NV – LFA returned to action in July with four events in four weeks. Each event featured a world title fight and helped usher in a new era of live sports entertainment amid the Coronavirus (COVID-19) pandemic, which caused a worldwide shutdown in sporting events in mid-March.

After the UFC safely returned to action in May, LFA followed suit with all four July events taking place behind closed-doors. Each event adhered to strict health codes, safeguards, and testing protocols that were put in place for the safety of the fighters, cornermen, and event staff.

LFA is now ready to continue its residency at the Sanford Pentagon in Sioux Falls, South Dakota. Starting on Friday, August 21st, LFA will host four more closed-door events in a span of four weeks. These events will be available worldwide on UFC FIGHT PASS® at 9 p.m. ET / 6 p.m. PT.

“I am excited to announced that LFA will be returning to the Sanford Pentagon in Sioux Falls, South Dakota,” stated LFA CEO Ed Soares. “We brought four successful closed-door events to the Sanford Pentagon in July. This continued a great working relationship we established with the South Dakota Athletic Commission and Sanford Pentagon six summers ago, when we brought the first sanctioned MMA event to the state. Our partnership with Sanford Heath has allowed us to create a safe and healthy environment for our fighters and staff. We look forward to continuing our residency on our LFA fight campus in Sioux Falls. We return on August 21st and will host four events in a span of four weeks.”

LFA 88: Willis vs. De Jesus takes place Friday, August 21st. The main event will feature an explosive welterweight world title fight between two of the most accomplished prospects in the division. Jaleel “The Realest” Willis (12-2) and Vinicius “The Brazilian Bad Boy” De Jesus (9-2) are two of the biggest stars in the 170-pound division. Willis is a 4-time LFA veteran that has either headlined or co-headlined for the promotion in each of those bouts. Prior to competing in MMA, Willis received All-American honors in Greco-Roman wrestling. De Jesus, like Willis, has made a name for himself competing in Bellator. The second-degree BJJ black belt also won and defended the CES welterweight title. The winner of this vacant title fight will become the fourth welterweight champion in LFA history.

LFA 89: Moore vs. Giannetti takes place Friday, August 28th. The main event will feature a high-stakes showdown between two of the top fighters in the stacked lightweight division. Brant “Killer Bee” Moore (7-1) and Joe “Skeletor” Giannetti (9-2-1) are two of the most promising prospects in one of LFA’s deepest divisions. Moore is a BJJ black belt that earned his first headlining bout for LFA after going 3-0 for the promotion. The proud Texan will now lock horns with a popular Boston native in Giannetti. The Bostonian made a name for himself competing on the UFC’s hit reality television show The Ultimate Fighter 27: Undefeated. Giannetti reached the tournament final after submitting his first two opponents in the first round. He then made his UFC debut at the UFC: TUF 27 Finale where he dropped a razor-close Split Decision.

LFA 90: Lazishvili vs. Steele takes place Friday, September 4th. The main event will feature a bantamweight world title fight between the top two undefeated prospects in the division. Zviad Lazishvili (12-0) and Ricky “The Karate Kid” Steele (6-0) understand the implications and prestige behind winning this title. This title has a long history as it was first awarded at LFA 1, after the merger of RFA and Legacy created LFA in 2017. Leandro Higo won the title that night and went on to fight for the Bellator title. The other three champions Ricky Simón, Miles Johns, and Casey Kenney currently fight in the UFC. Lazishvili is an undefeated Georgian fighter who earned a dominant win in his LFA debut at LFA 79. Steele is a fourth-degree black belt in Keishinkan Karate who has impressed in RFA, TUF 27, and Contender Series.

LFA 91 takes place Friday, September 11th. The main event is being finalized and will be announced soon.