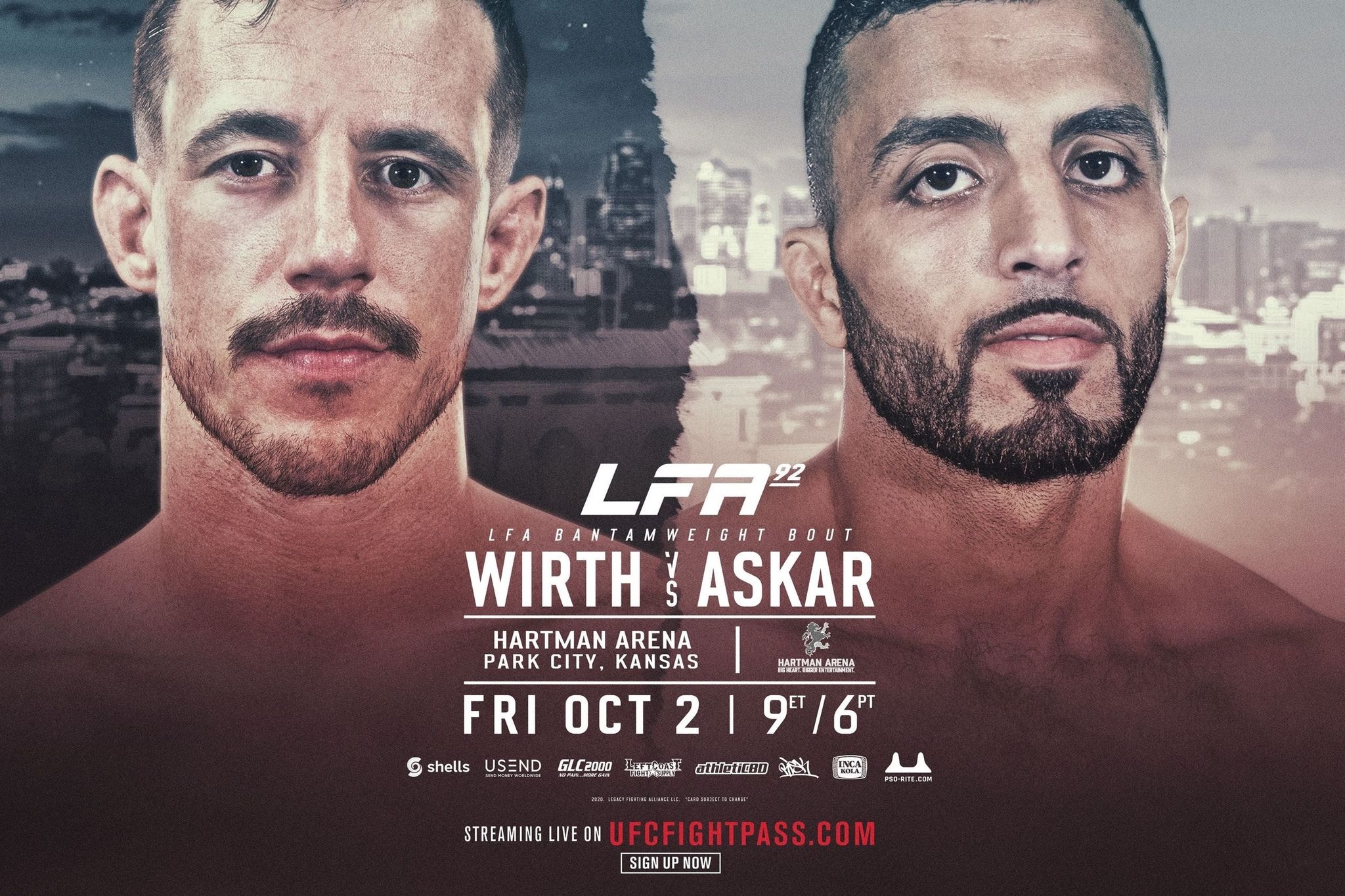 LAS VEGAS, NV – LFA returned to action in July with four events. This marked Phase 1 of LFA’s 2020 comeback amid the Coronavirus (COVID-19) pandemic. Each event featured a world title fight and helped usher in a new era of live sports entertainment. Phase 2 consisted of four more successful events during the months of August and September. All eight of these summer events took place at the Sanford Pentagon in Sioux Falls, South Dakota. Now the promotion is headed two states south for Phase 3 this fall.

LFA 92: Wirth vs. Askar will kick off Phase 3 on Friday, October 2nd at the Hartman Arena in Park City, Kansas, which is located in the Wichita metro area. LFA 93 on October 16th and LFA 94 on October 30th will also take place at the LFA fight campus in Kansas. The main event for LFA 93 and LFA 94 will be announced soon. These three events will be available worldwide on UFC FIGHT PASS® at 9 p.m. ET / 6 p.m. PT.

“Everyone at LFA is excited to begin Phase 3 of our comeback in Kansas,” stated LFA CEO Ed Soares. “We will host three events in October at the Hartman Arena in Park City, which is part of the Wichita metro area. Top bantamweight prospects Kevin Wirth and Askar Askar will headline LFA 92 on Friday, October 2nd. These are two of the most exciting fighters we have on our roster and it’s the ideal way to start Phase 3.”

Wirth (8-1) made one of the biggest splashes in promotional history, when he made his LFA debut at LFA 33 in 2018. The Coloradan known as “Mr. Nice Guy” headed to Texas in a battle of unbeaten prospects and finished local favorite Isaiah Gutierrez with a superkick that would have made WWE legend Shawn Michaels proud. Wirth delivered the WWE Hall of Famer’s signature “Sweet Chin Music” to score a highlight reel knockout that is still making its rounds on the Internet. Most recently, Wirth scored a Unanimous Decision win over Ryan Lilley in the co-main event of LFA 74. Now training at Alliance MMA in southern California, Wirth is looking for a marquee win in his highest profile fight to date.

Askar (10-1) has become one of the most highly-regarded bantamweight prospects in the world after winning his first ten professional bouts. The biggest of those ten wins came in his LFA debut against the battle-tested LFA and RFA veteran Derrick Mandell at LFA 50 in 2018. Askar made a big impression that night by sweeping the judge’s score cards and earning a dominant Unanimous Decision. The Palestine native moved to the United States with his family, when he was 7-years-old, and now calls Chicago home. He trains alongside his younger brothers Asef and Motaz at the Midwest Training Center in the Chicagoland area. All three Askar brothers have earned victories inside our Octagon.