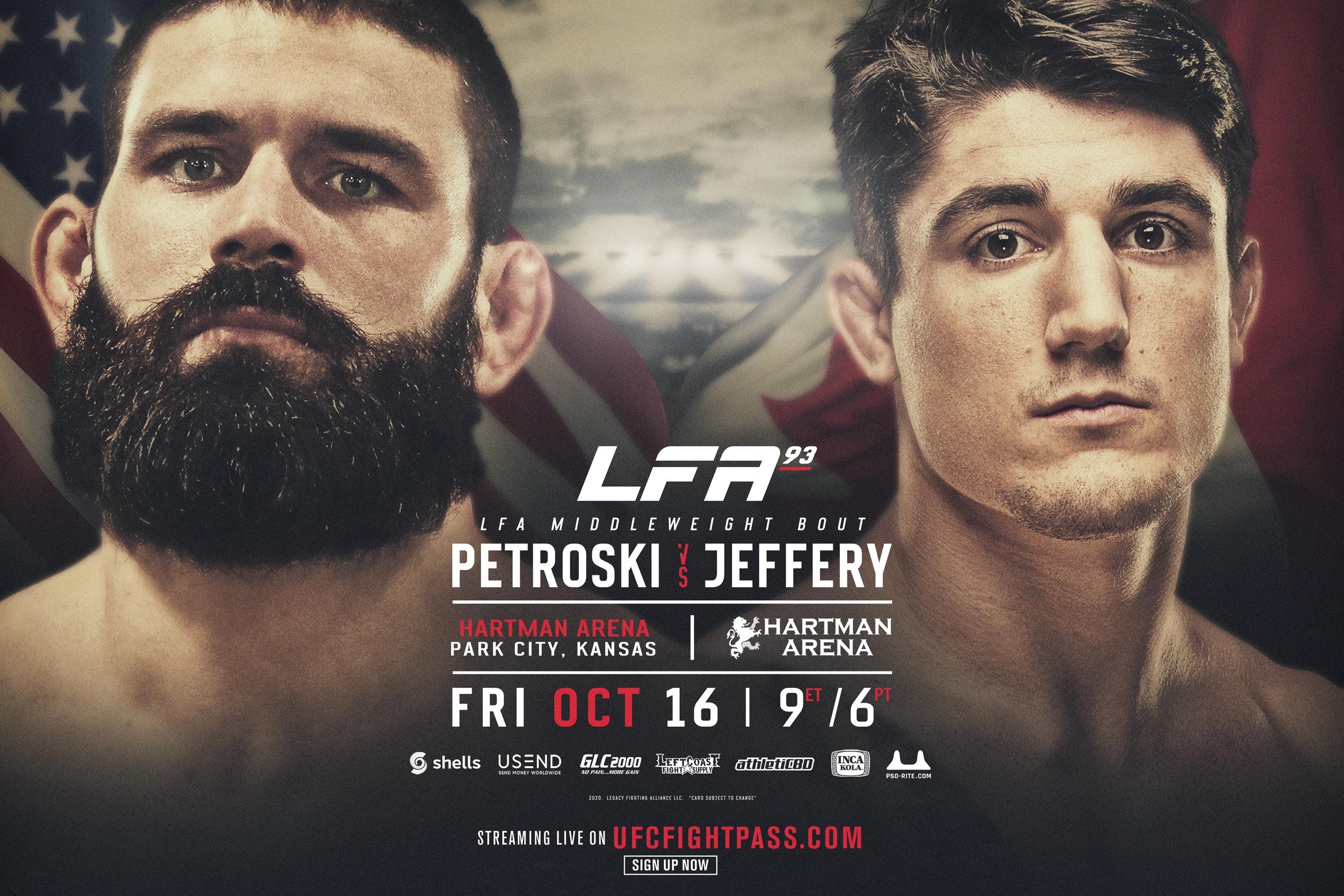 LFA brings Continental Showdown to the Sunflower State at LFA 93

LAS VEGAS, NV – LFA began Phase 3 of its 2020 comeback amid the Coronavirus (COVID-19) pandemic by starting a residency in the state of Kansas on October 2nd. Now it is set for its second event in the Sunflower State this month with LFA 93. The headliner will feature a massive continental showdown pairing the top middleweight prospects from the United States and Canada.

LFA 93: Petroski vs. Jeffery takes place Friday, October 16th at the Hartman Arena in Park City, Kansas, which is a suburb of Wichita. All three Phase 3 events in the month of October will take place at the LFA fight campus in Kansas. These events will be available worldwide on UFC FIGHT PASS® at 9 p.m. ET / 6 p.m. PT.

“We are excited to bring a huge continental showdown to the state of Kansas at LFA 93,” stated LFA CEO Ed Soares. “Andre Petroski is the top 185-pound prospect in the United States. He will fight his Canadian counterpart Aaron Jeffery, who holds the same level of hype and notoriety north of the border. LFA is a prospect driven organization and this main event epitomizes exactly what we do.”

Petroski (5-0) is the latest collegiate wrestler turned MMA prospect to hail from the wrestling hotbed of Pennsylvania. Petroski grew up in Springfield, which is a suburb of Philadelphia. It is there where he became a three-time medalist at the Pennsylvania state wrestling championships. Petroski then followed in the footsteps of his father, who wrestled collegiately at Penn State. The younger Petroski was a member of three NCAA programs. He first took his talents to the University of North Carolina (Division I) and then finished his college wrestling career with stops at Bloomsburg (Division I) and Kutztown (Division II) back home in Pennsylvania. Petroski’s blue chip pedigree has transitioned seamlessly into MMA success. Now training in Colorado at Factory X, Petroski holds a perfect 5-0 record with 5 stoppage wins.

Jeffery (8-2) is the top middleweight prospect from a country with a rich MMA history, but he takes pride in the fact that he is also a pioneer of sorts for his fellow countrymen and countrywomen. Last summer, he became the first Canadian to compete on Dana White’s Contender Series and now he is the first Canadian to headline an LFA event. Jeffery is a flashy kickboxing based fighter from the small Canadian town of Tillsonburg, Ontario. This is the same hometown as famed MMA trainer and fellow kickboxer, the late great Shawn Tompkins. Hailing from a region revered for producing fighters with world-class kickboxing pedigrees, Jeffery proudly carries on that tradition with a prolific 87.5% finishing rate. Not surprisingly, the Para Bellum MMA product has earned 6 of those 7 finishes via KO or TKO.