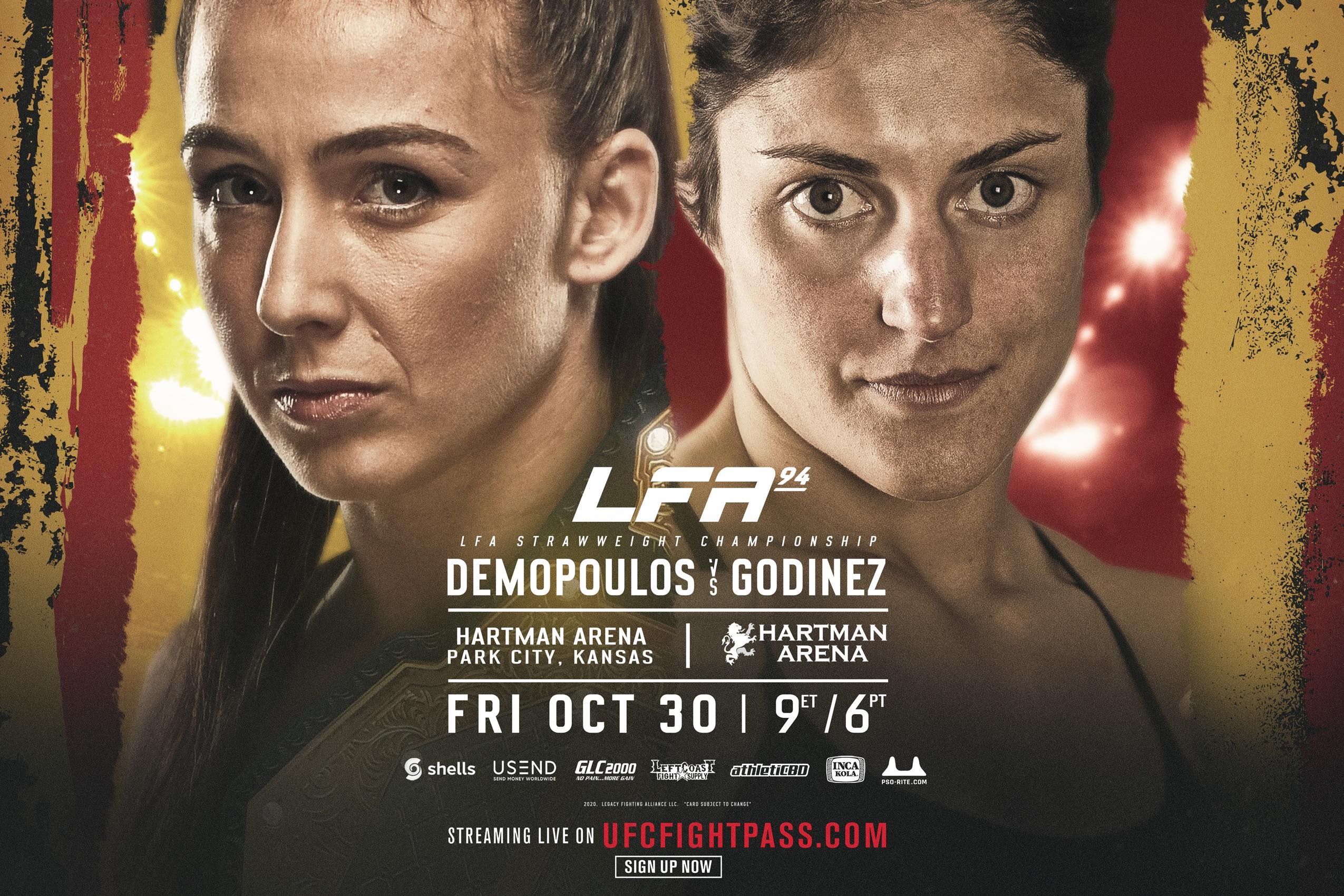 LAS VEGAS, NV – The LFA began Phase 3 of its 2020 comeback amid the Coronavirus (COVID-19) pandemic by hosting two action-packed MMA events in the state of Kansas this month. Now it is bringing a world title fight to the Sunflower State at the end of October. The main event of LFA 94 will feature a women’s strawweight world title fight between the top female 115-pound prospects from the United States and Canada.

LFA 94: Demopoulos vs. Godinez takes place Friday, October 30th at the Hartman Arena in Park City, Kansas, which is a suburb of Wichita. There will be a limited number of tickets available for sale for this event. Please follow Hartman Arena (@HartmanArena) and LFA (@LFAfighting) on social media for updates on pricing and on-sale dates. All three Phase 3 events in the month of October will take place at the LFA fight campus in Kansas. These events will be available worldwide on UFC FIGHT PASS® at 9 p.m. ET / 6 p.m. PT.

“We are excited to bring the women’s strawweight championship to Kansas at LFA 94,” stated LFA CEO Ed Soares. “Vanessa Demopoulos is our inaugural women’s strawweight champion. She won the title in July with an incredible submission and will now defend it for the first time on October 30th. Demopoulos will face Lupita Godinez, who is undefeated and the top female prospect from Canada.”

Demopoulos (5-2) became the inaugural LFA women’s strawweight champion at LFA 85 this past July with a spectacular come-from-behind submission win in her title fight with Sam Hughes. Down on all three score cards heading into the fourth round, the jiu-jitsu ace known as “Lil Monster” pulled off a spectacular Inverted Triangle Choke submission that left her opponent unconscious. Demopoulos, who is a six-time American National champion in jiu-jitsu, is now the frontrunner to win “Submission of the Year”. More importantly, the 32-year-old is now the LFA women’s strawweight champion and is looking to join current UFC stars Andrea Lee and Sabina Mazo as the only women in LFA history to successfully defend their titles. Demopoulos will have that opportunity in the main event of LFA 94.

Godinez (4-0) is the top female prospect from north of the border — and south of the border. That is because the undefeated prospect known as “Loopy” was born in Aguascalientes, Mexico and then moved with her family across two borders to Vancouver, British Columbia, Canada when she was a teenager. Godinez proudly represents both the El Tri and the Maple Leaf and is now looking to make her presence felt stateside. After picking up a regional title in Canada in her most recent fight, Godinez now has her sights set on LFA gold. The 27-year-old is certainly beaming with confidence as she already holds a win over Hughes, the same woman Demopoulos defeated for the LFA title in July. Godinez defeated Hughes in her last amateur bout and believes her wrestling pedigree will be enough to dethrone Demopoulos.