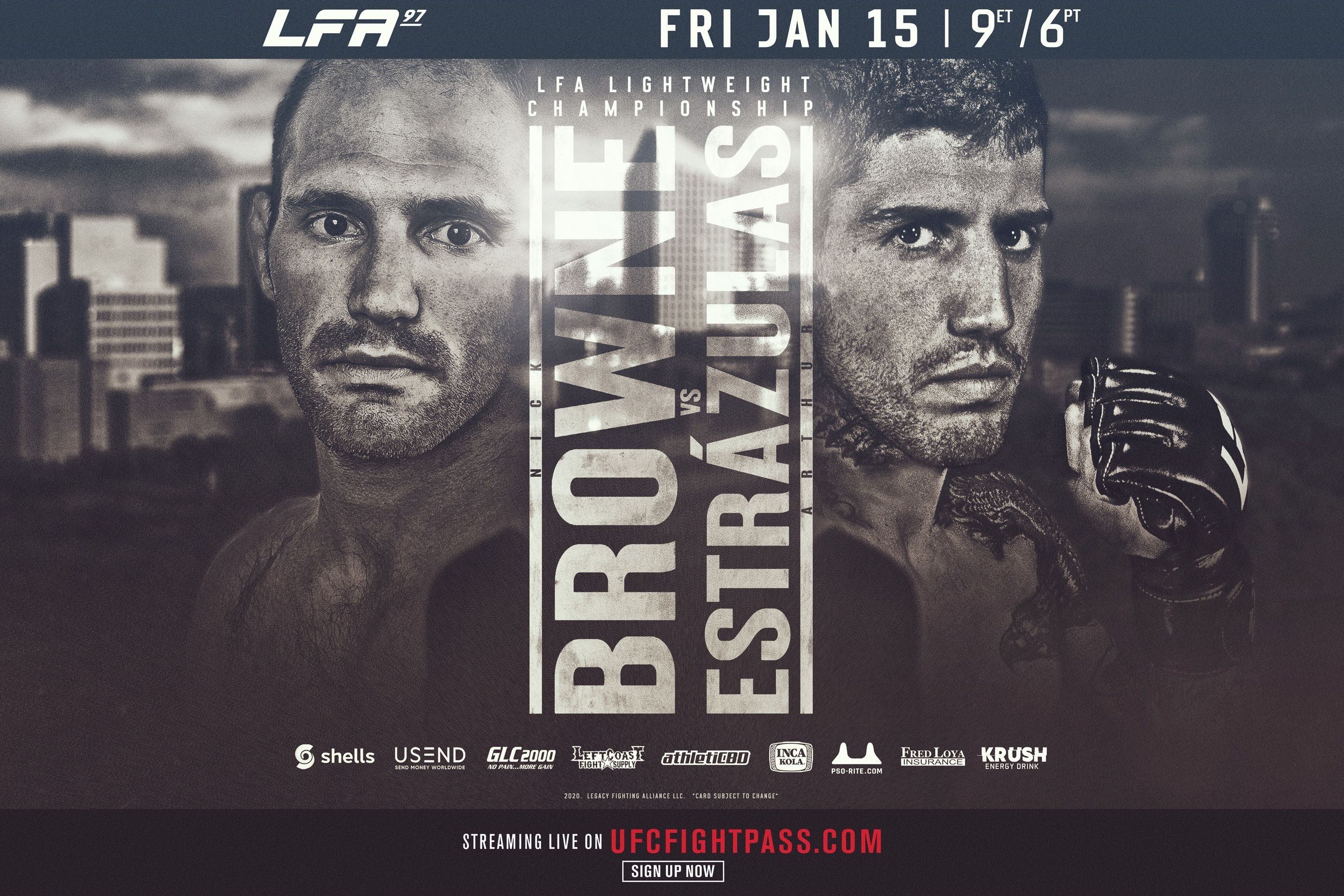 LAS VEGAS, NV — LFA CEO Ed Soares announced today that the promotion will kick off its action-packed 2021 schedule in the Sunflower State. LFA 97 will feature a long-awaited lightweight title fight when the promotion returns to Kansas in January.

LFA 97: Browne vs. Estrázulas takes place Friday, January 15th at the Hartman Arena in Park City, Kansas, which is a suburb of Wichita. The main event will feature a lightweight title fight between LFA standouts and BJJ black belts Nick Browne and Arthur Estrázulas. This title fight was originally scheduled to headline LFA 95 last month, but was postponed due to Coronavirus (COVID-19) testing protocols that were implemented before the event. The entire main card will be available worldwide on UFC FIGHT PASS® at 9 p.m. ET / 6 p.m. PT.

“I am excited to announce that we are kicking off UFC FIGHT PASS’s busy 2021 schedule with a stacked fight card at LFA 97,” stated LFA CEO Ed Soares. “Nick Browne and Arthur Estrázulas were originally scheduled to fight for LFA lightweight championship at LFA 95, but with the safety of our fighters in mind during Fight Week, their title fight was rescheduled to headline LFA 97. Browne and Estrázulas are BJJ black belts that also love to strike. They will fight for the vacant LFA lightweight title on January 15th, which will be the first live event on UFC FIGHT PASS in the new year.”

Browne (10-1) made his LFA debut in 2019 in the same building that he will be looking to claim LFA gold at LFA 97. The man known as “Nyquil” needed less than a half of a round to submit his opponent Trey Ogden with a Rear Naked Choke in what served as the main event of LFA 76. The win put the BJJ black belt in line for a shot at the title, but he sustained a career-threatening injury and instead spent the first half of 2020 rehabbing and getting back into fight shape. The effort paid off as the 30-year-old Pennsylvanian returned to the LFA Octagon in the co-main event of LFA 87 and defeated Ben Egli via Unanimous Decision to solidify his shot at the title.

Estrázulas (12-4) has been an integral member of the famed Kings MMA fight team in southern California for many years. Now the BJJ black belt is looking to become the fourth fighter from that gym to capture LFA gold. Estrázulas made his promotional debut in the summer of 2016 in the main event of RFA 42. This happened just before RFA merged with Legacy to create LFA. In LFA, Estrázulas has been unstoppable. The 31-year-old Brazilian picked up back-to-back first round submission wins via Rear Naked Choke against Steve Kozola and Dominic Clark. The wins came in the co-headliners of LFA 69 and LFA 86 and were more than enough to earn him a shot at the title.