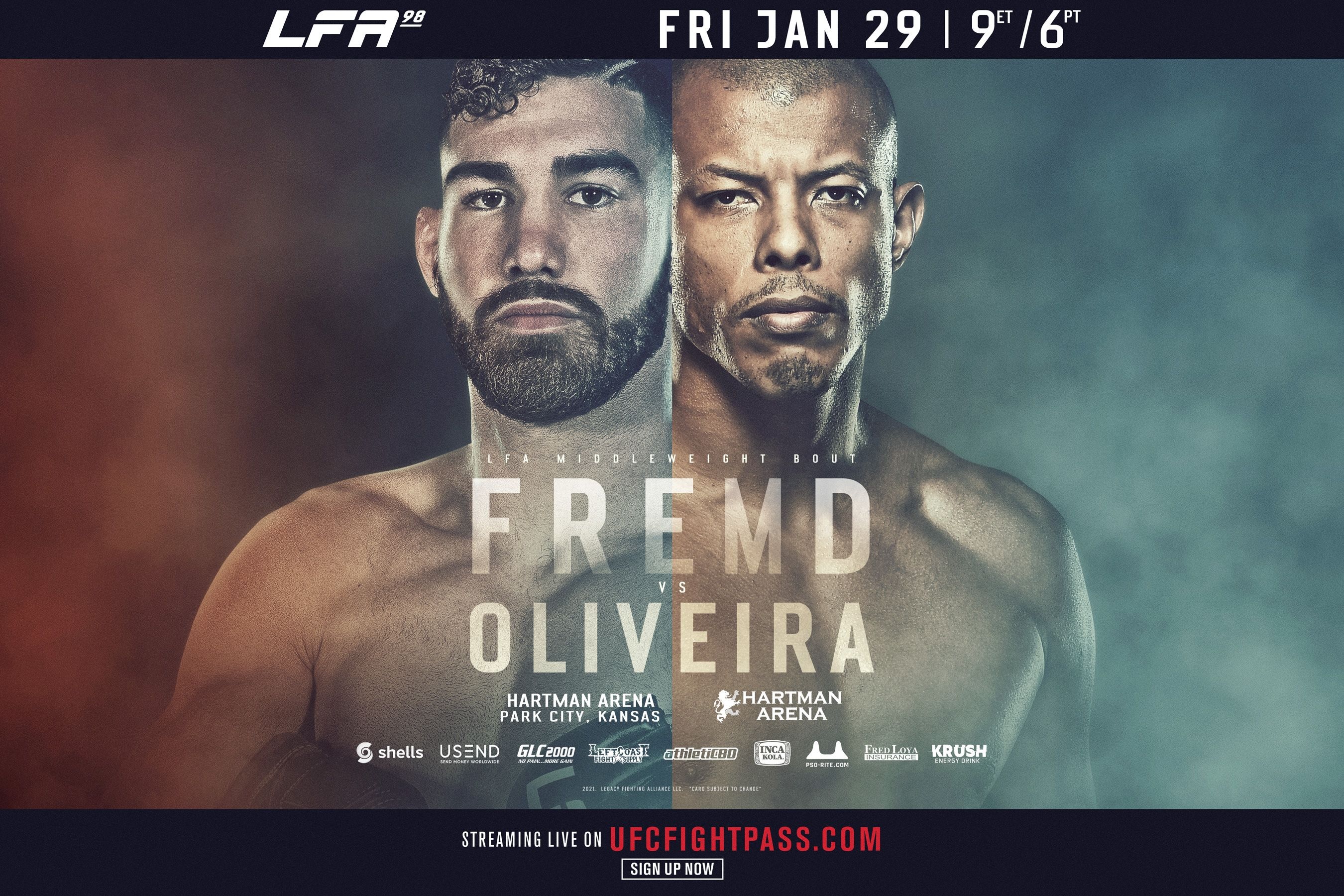 LFA 98: Fremd vs. Oliveira takes place Friday, January 29th at the Hartman Arena in Park City, Kansas, which is a suburb of Wichita. The main event will feature a middleweight showdown between devastating knockout artists Josh Fremd and Bruno Oliveira. The entire main card will be available worldwide on UFC FIGHT PASS® at 9 p.m. ET / 6 p.m. PT.

“I am excited to announce that we will bring our second show in two weeks to Kansas to kick off our 2021 schedule,” stated LFA CEO Ed Soares. “Josh Fremd became one of MMA’s biggest breakthrough stars in 2020. He will face Brazilian standout and fellow knockout artist Bruno Oliveira in the main event of LFA 98. This is a pivotal fight in our middleweight division, but don’t expect it to go the distance.”

Fremd (6-1) is one of the fastest rising prospects in the sport after making the most of his opportunities in 2020. While most of the world was adjusting to quarantine regulations and the disruption of live sports, Fremd was living up to the potential that many have expected to see from the talented 26-year-old. The western Pennsylvania native took nearly two years off to fix some nagging injuries. In that time, Fremd also moved to the mountains of Colorado and set up shop at Factory X. It is there, where he began training regularly with Anthony Smith and many other UFC fighters. When it was time to make his comeback, the impact was immediate. Fremd destroyed Lamar Gosey with knees after controlling him with a half nelson. The bloody stoppage came 86 seconds into their light-heavyweight contest at LFA 89. Seven weeks later, he dropped down to middleweight and knocked out Contender Series alum Antonio Jones in less than a round at LFA 93.

Oliveira (8-2) is the type of fighter that embraces the challenge of facing highly-touted prospects. While Fremd was wreaking havoc in the LFA in 2020, Oliveira was busy preparing to headline a fight card for Dana White’s Contender Series in Las Vegas. The 36-year-old earned the opportunity to headline the UFC boss’ event this past November with an impressive showing against LFA alum and current UFC fighter Jared Gooden. The signature win came in spectacular fashion in his lone bout of 2019. What made the win even more impressive was the way Oliveira handled the mind games that Gooden dished out leading up to the fight. While a weaker minded fighter could have been easily distracted by the antics that were deployed at the weigh-in and during the official in-cage introductions, Oliveira remained composed. The focused Brazilian unleashed an onslaught of strikes, as soon as the fight began, and ended the encounter via TKO in just 53 seconds.