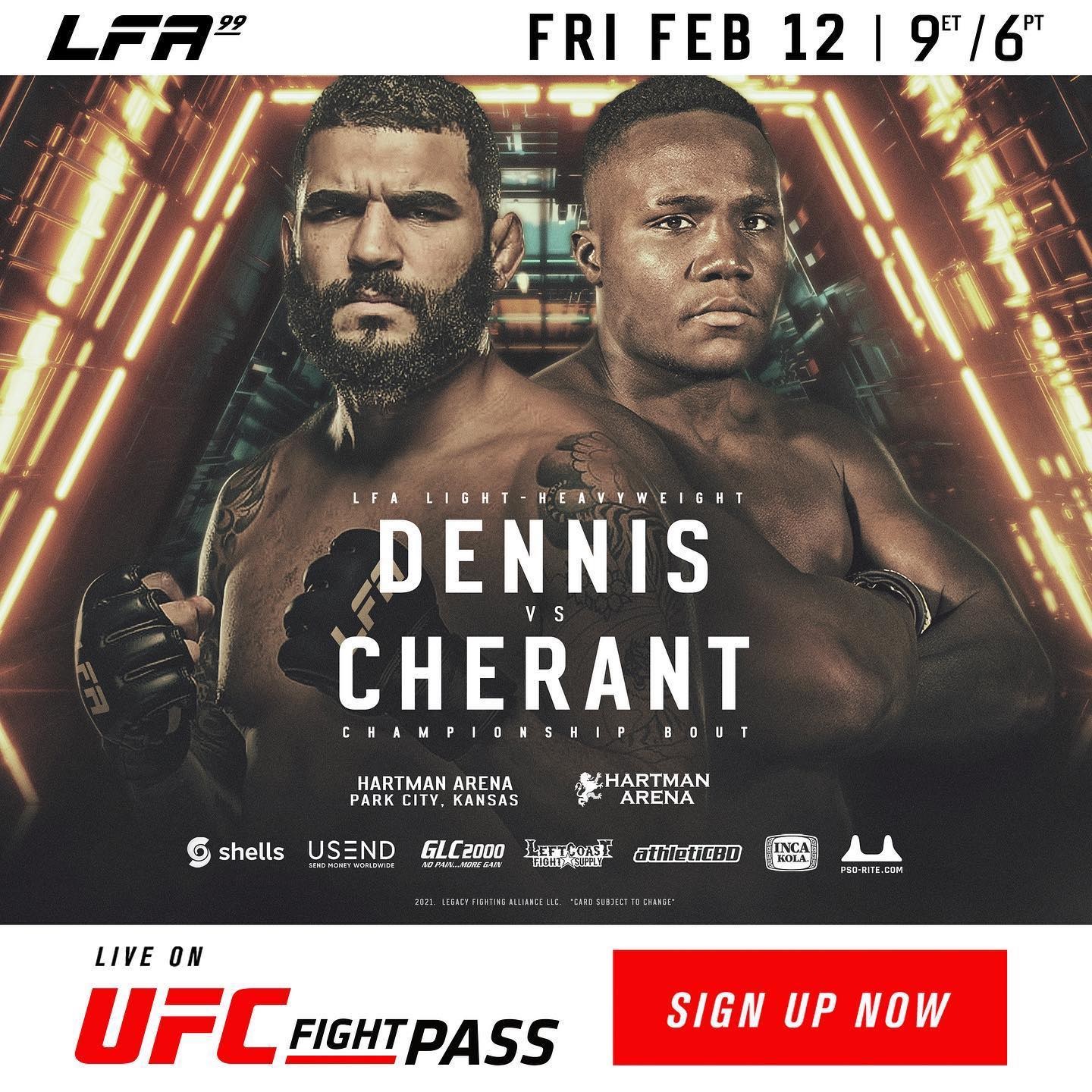 LFA brings the Light-Heavyweight Championship to Kansas at LFA 99

LAS VEGAS, Nevada — LFA CEO Ed Soares announced today that the promotion will host its third event of 2021 in Kansas. The main event of LFA 99 will feature a light-heavyweight world title fight between a former champion and a surging prospect. The winner will be the fourth 205-pound champion in LFA history. The three previous champions are currently fighting in the UFC and Bellator.

Dennis (18-7) is one of the most popular fighters to have come out of the Legacy FC promotion. The Oklahoma native defeated former UFC heavyweight title challenger Paul Buentello to capture the Legacy FC light-heavyweight title at Legacy FC 29. Dennis also competed in Legacy FC’s kickboxing promotion LK as well as GLORY Kickboxing. He then went on to compete on the UFC’s reality television show The Ultimate Fighter 23 (TUF 23). Dennis impressed UFC President Dana White with his elite striking skills that helped him advance to the quarter-finals of TUF 23. Once LFA was created after to the merger of RFA and Legacy FC, Dennis would continue his winning ways by defeating current UFC fighter Danilo Marques in the main event of LFA 9. Dennis would return to GLORY Kickboxing in 2018, but made a triumphant return to MMA the following year. He is currently riding a 3-fight win streak with his most recent win coming against Dylan Potter in the co-main event of LFA 95.

Cherant (6-1) is one of the most promising light-heavyweight prospects to emerge on the world stage of MMA in recent years. The Boston native and Joe Lauzon protégé won his first four professional bouts in 2018. All four of those wins came by way of submission. The first two were via Guillotine Choke, while the second half came by way of Rear Naked Choke. The proud Haitian-American brought a whole new meaning to the epithet “The Boston Strangler” and his reputation caught the attention of another famous New Englander, UFC President Dana White. Cherant was invited to headline a Dana White’s Contender Series event on ESPN+ in what would be just his fifth professional fight. The man more affectionately known as “Water Buffalo” did not get the win that night, but gained a world of experience and notoriety that he would use in his next bout, which happened to be his LFA debut at LFA 86. Cherant once again won with a choke, but this time it came via Anaconda Choke.