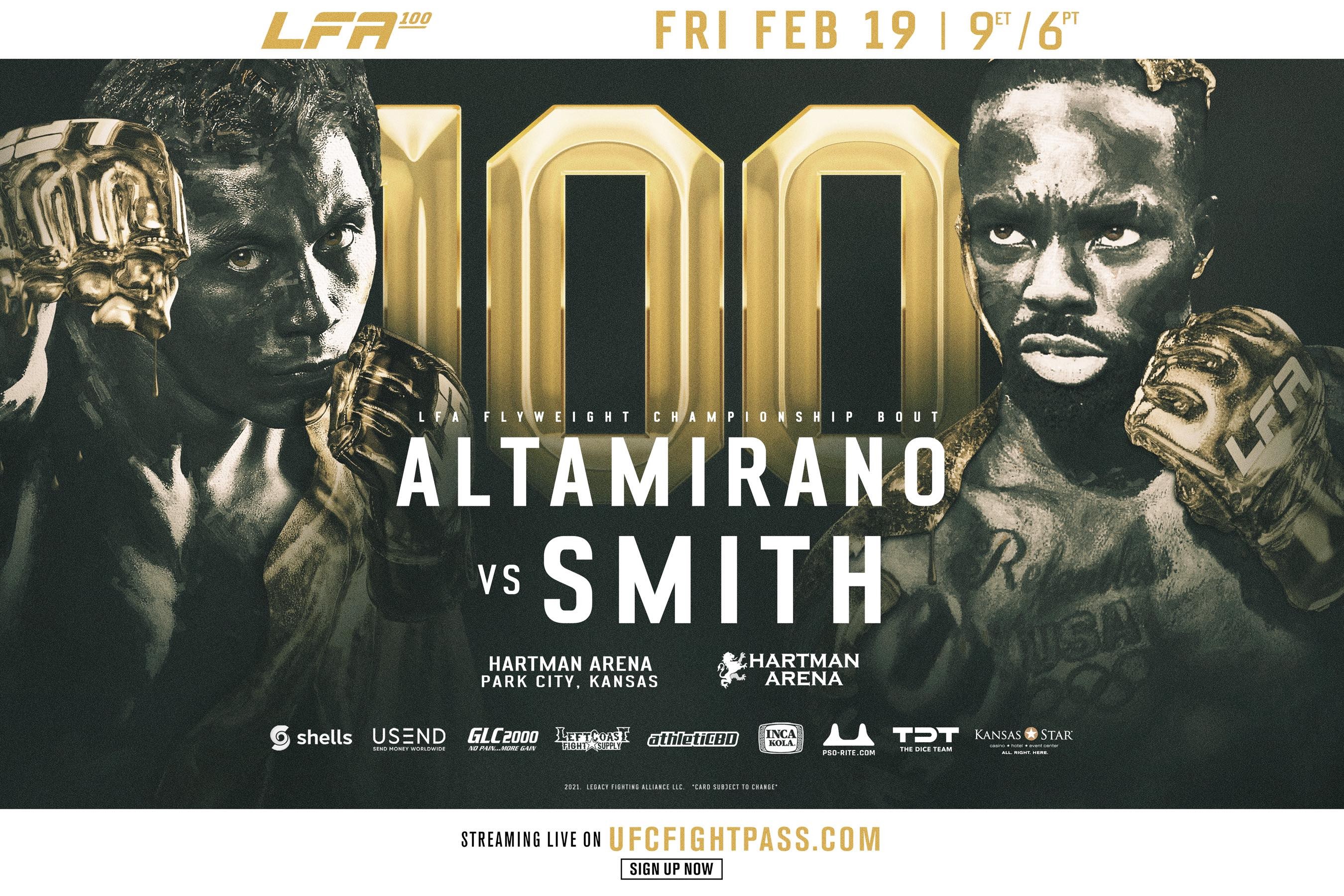 There are a limited number of TICKETS on sale
NOW through Ticketmaster.com

LAS VEGAS, Nevada — LFA CEO Ed Soares announced today that the promotion will host its historic LFA 100 event in the state of Kansas. The main event of LFA 100 will feature a flyweight world title fight between the winningest fighter in LFA history and an explosive young prospect. The winner will become the seventh 125-pound champion in LFA history. The four most recent champions are currently fighting in the UFC.

LFA 100: Altamirano vs. Smith takes place this Friday, February 19th at the Hartman Arena in Park City, Kansas, which is a suburb of Wichita. The main event will feature a flyweight title fight between LFA’s all-time wins leader Victor “El Magnifico” Altamirano and top prospect Nate “The Savage” Smith. The entire main card will be available worldwide on UFC FIGHT PASS® at 9 p.m. ET / 6 p.m. PT.

There are a limited number of tickets available for LFA 100: Altamirano vs. Smith. These tickets are available for purchase through Ticketmaster.com.

Altamirano (8-1) became the LFA’s all-time wins leader in November with a spectacular second round Triangle Choke submission against fellow LFA standout Lloyd McKinney at LFA 95. The win snapped a tie with current UFC fighter and former LFA featherweight champion Damon Jackson for the most wins in LFA history. The proud Texan has won all eight of his professional bouts for LFA and was hoping to build on that record-setting tally with LFA gold on the line. The charismatic 30-year-old, who moonlights as a cellist, will get that title shot at LFA 100.

Smith (6-1) is one of the most confident and promising flyweight prospects to emerge over the past 12 months. The Chicago native burst onto the global MMA scene with a dominant performance in his LFA debut at LFA 82. The collegiate wrestler faced another top undefeated prospect Sean Stebbins that night. “The Savage” dismantled the Minnesotan with a savage display of ground n’ pound just 45-seconds into the second round of their bout. The 25-year-old is now looking to bring LFA gold back to his new home at Elevation Fight Team in Denver, Colorado.