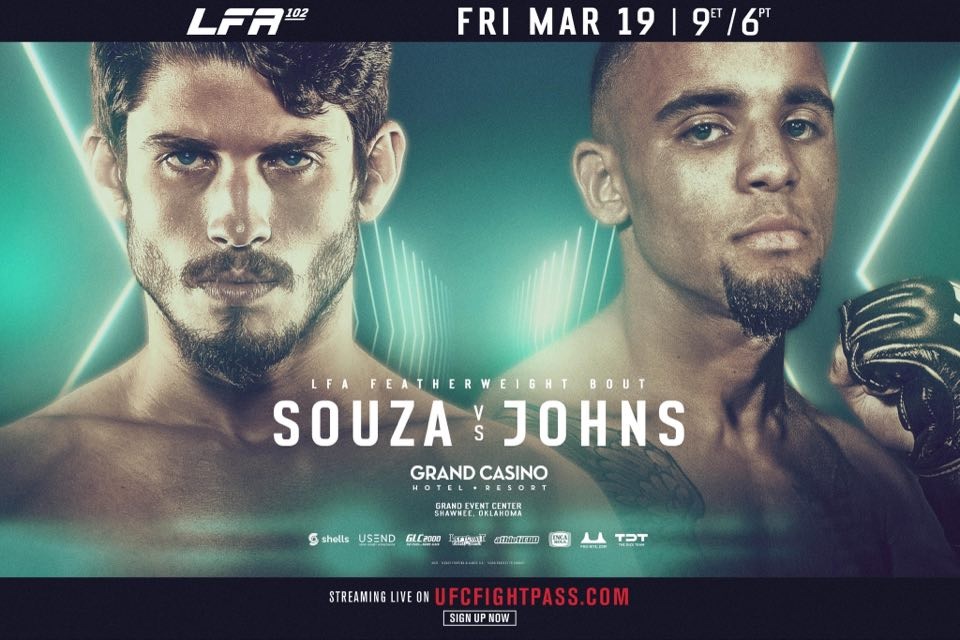 LAS VEGAS, Nevada — LFA CEO Ed Soares announced today that two promotional fan favorites will headline LFA 102, which will be the second of three March events in the state of Oklahoma. The co-main event of LFA 102 will showcase the second middleweight tournament semi-final bout. The winner will face Josh Fremd in the tournament final with the LFA middleweight title on the line.

“We are excited to bring another stacked fight card to Oklahoma at LFA 102,” stated LFA CEO Ed Soares. “Bruno Souza vs. Elijah Johns face off in an explosive main event, while Gregory Rodrigues and Al Matavao meet in the second middleweight tournament semi-final bout with a shot at the LFA middleweight title on the line.”

Souza (8-1) is a protégé of former UFC light-heavyweight champion Lyoto Machida. The 24-year-old possesses the same elusive and brutally efficient karate style of his sensei. The Machida Karate black belt is currently riding an eight-fight win streak with the last three coming inside the LFA Octagon. Those wins have come over top prospects Mike Hamel, Kamuela Kirk, and Guilherme Santos. The most recent win over Santos was his most impressive performance to date. “The Tiger” dismantled his rival with sniper-like precision to earn a TKO victory in the second round. Now the young Brazilian, who is actually 13 days older than Johns, looks to continue his dominance at LFA 102.

Johns (7-1) is the younger brother of former LFA bantamweight champion and current UFC star Miles Johns. The 24-year-old prospect followed his brother from their native Kansas to Dallas, Texas where the two train at Fortis MMA. The younger Johns brother, affectionately known as “Baby Johns”, will be headlining his first LFA event one day before his 25th birthday. What makes it even more satisfying is the fact that his journey with LFA began all the way back at LFA 1, where he made his amateur debut. Johns is hoping to seize the moment at LFA 102 that will put him in prime position to continue following in his brother’s impressive footsteps with his biggest win to date.