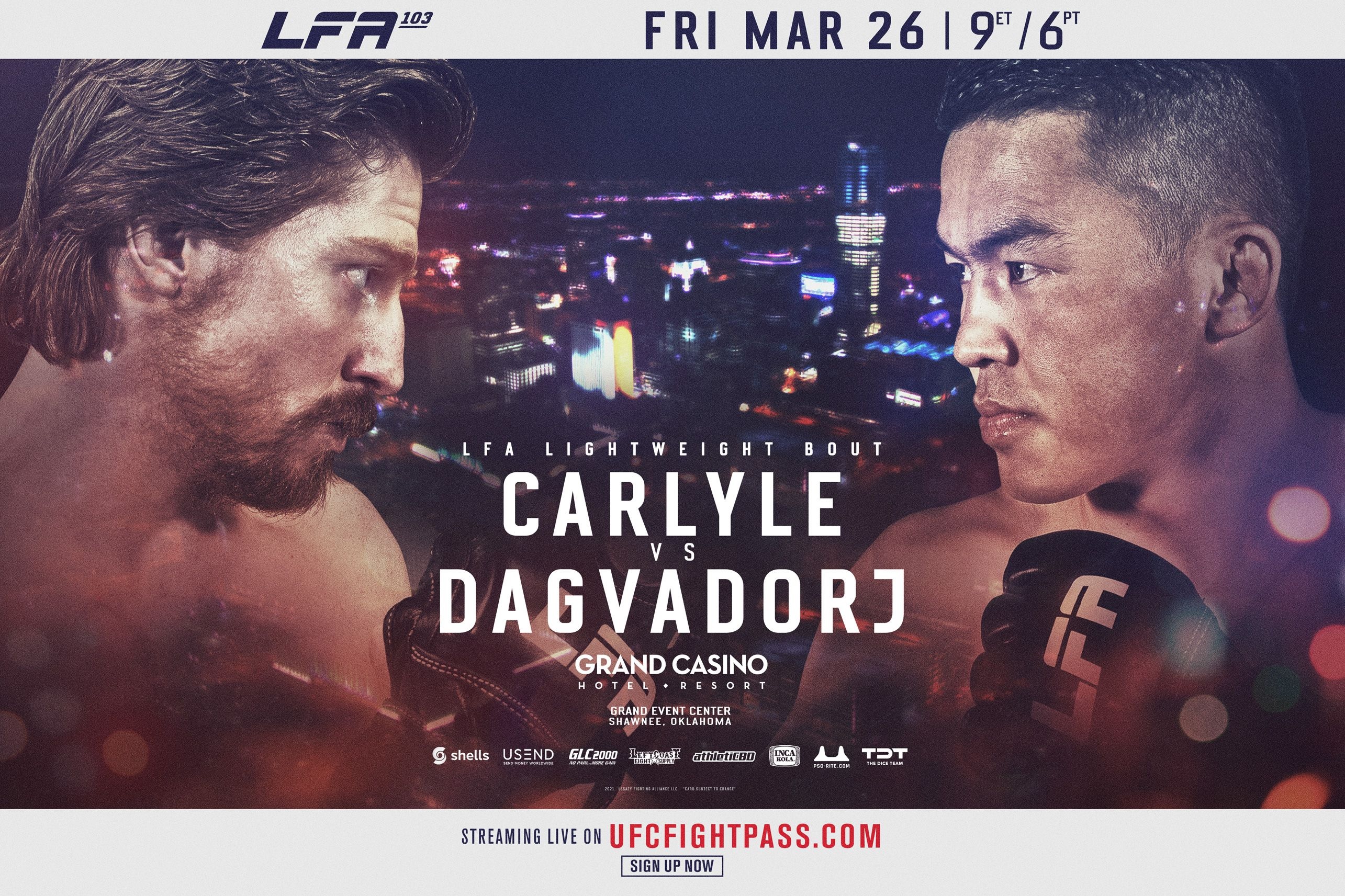 LFA 103: Carlyle vs. Dagvadorj takes place Friday, March 26th at the Grand Event Center in Shawnee, Oklahoma, which is an exurb of Oklahoma City. The main event will feature a lightweight showdown between UFC veteran Spike “The Alpha Ginger” Carlyle and LFA title challenger Batsumberel “The Mongolian Falcon” Dagvadorj. The entire main card will be available worldwide on UFC FIGHT PASS® at 9 p.m. ET / 6 p.m. PT.

“We are excited to bring a third world-class fight card to Oklahoma this month,” stated LFA CEO Ed Soares. “Spike Carlyle and Batsumberel Dagvadorj are two of the most entertaining fighters in the world and will face off in the main event of LFA 103. Our final fight of the month could very well be the fight of the month.”

Carlyle (9-3) is returning to the LFA after a three-fight run in the UFC. The 27-year-old southern Californian won his UFC debut immediately after signing with the industry leader a year ago. In that bout, he used an onslaught of his signature ground n’ pound to finish highly-touted prospect and Dana White’s Contender Series standout Aalon Cruz. Carlyle would drop narrow decisions in his next two outings, but gained a large fanbase due to his wild style and unique showmanship. That combination of traits is what helped him get signed to the UFC. That came after “The Alpha Ginger” landed a spectacular spinning backfist knockout against Matthew Colquhoun at LFA 74.

Dagvadorj (7-1) returns to the LFA Octagon after making one of the most memorable LFA debuts in the promotion’s history. The 33-year-old prospect is one of the most revered fighters to hail from the country of Mongolia. In his LFA debut, Dagvadorj fought for the LFA welterweight title in the main event of LFA 96 this past December. It was a fight for the ages. After a 25-minute, back-and-forth war with Maycon Mendonça, he dropped the decision, but the fight ended up being voted by the fans as the LFA Fight of the Year in 2020. “The Mongolian Falcon” is now taking his frenetic pace and world-class Combat Sambo skills to the lightweight division at LFA 103.