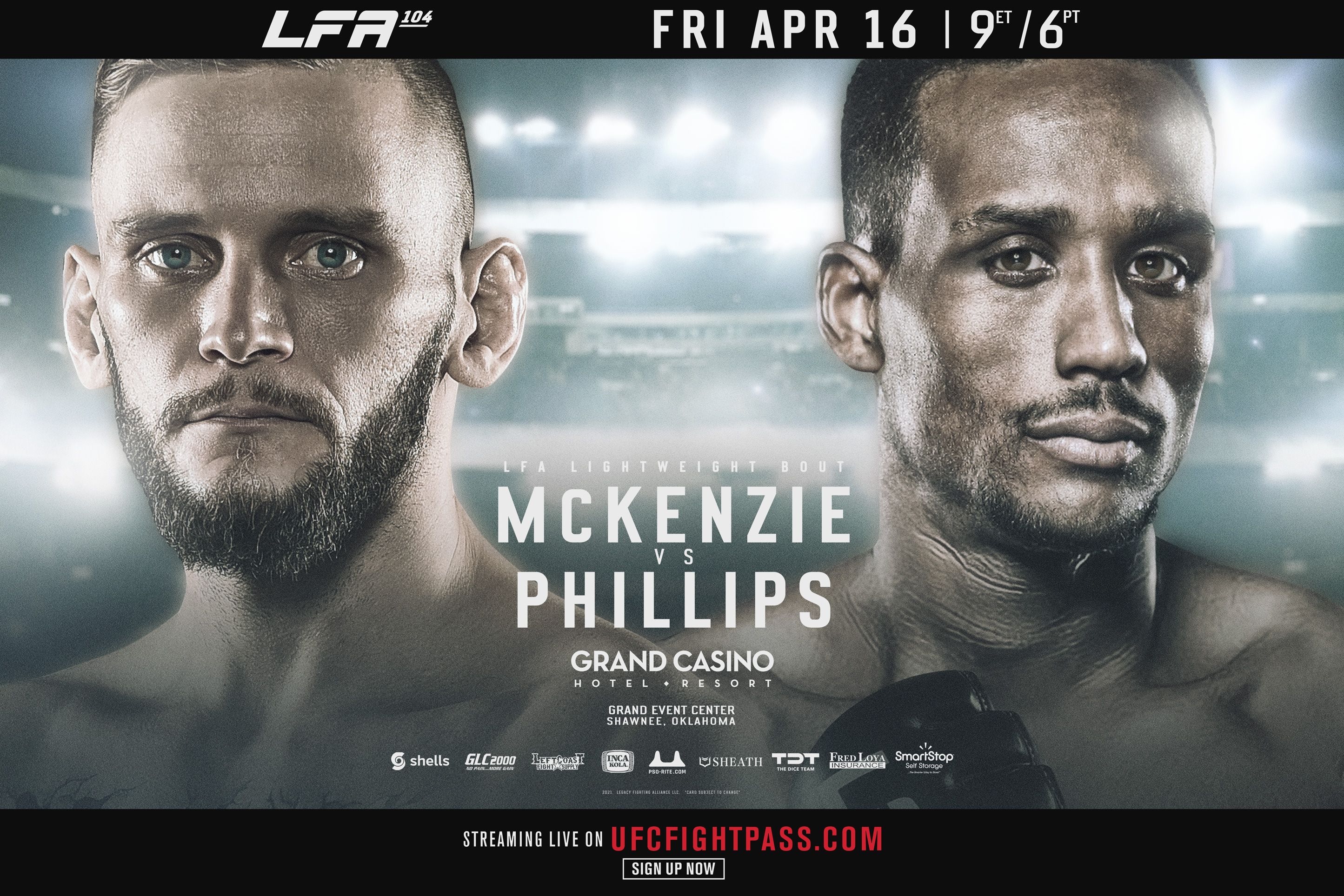 LFA 104: McKenzie vs. Phillips takes place Friday, April 16th at the Grand Event Center in Shawnee, Oklahoma, which is an exurb of Oklahoma City. The main event will feature a lightweight showdown between OKC rivals Aaron McKenzie and Brandon Phillips. The entire main card will be available worldwide on UFC FIGHT PASS® at 9 p.m. ET / 6 p.m. PT.

“We are excited to return to Oklahoma in April,” stated LFA CEO Ed Soares. “The main event at LFA 104 will feature two of our most promising lightweight prospects, Aaron McKenzie and Brandon Phillips. Both fighters are local to the area, with a bit of cross town rivalry. This is the perfect way to kick off the first of three events this month at the Grand Casino.”

McKenzie (9-2-1) returns to the LFA Octagon after winning his first two fights for the promotion last year. The Rafael Lovato Jr. protégé is known for his precision striking, grappling prowess, and all-around toughness. The Bellator veteran quickly showcased these attributes after signing with LFA. In the co-main event of LFA 88, he survived a powerful onslaught from Brazilian powerhouse Gláucio Eliziário, only to flip the script, and end the fight with a Rear Naked Choke in one of the best first rounds of 2020. McKenzie returned two months later in the co-main event of LFA 94. This time, the 32-year-old defeated The Ultimate Fighter 27 (TUF 27) runner-up Joe Giannetti via Unanimous Decision.

Phillips (8-3) returns to MMA after a two-year foray into the world of professional kickboxing. The American Top Team OKC product is now looking to assert himself as the top lightweight in OKC when he makes his LFA debut. Before embarking on his recent kickboxing career, Phillips was successful in MMA, where he earned a pair of victories in Bellator. The 31-year-old also gained valuable experience fighting some of the best talent in the world. Two of those fights came against Bryce Mitchell and A.J. McKee Jr. Mitchell and McKee Jr. currently hold a combined 31-0 record and are two of the fastest-rising names in the sport. Phillips fought them in back-to-back fights in a span of 3 months.