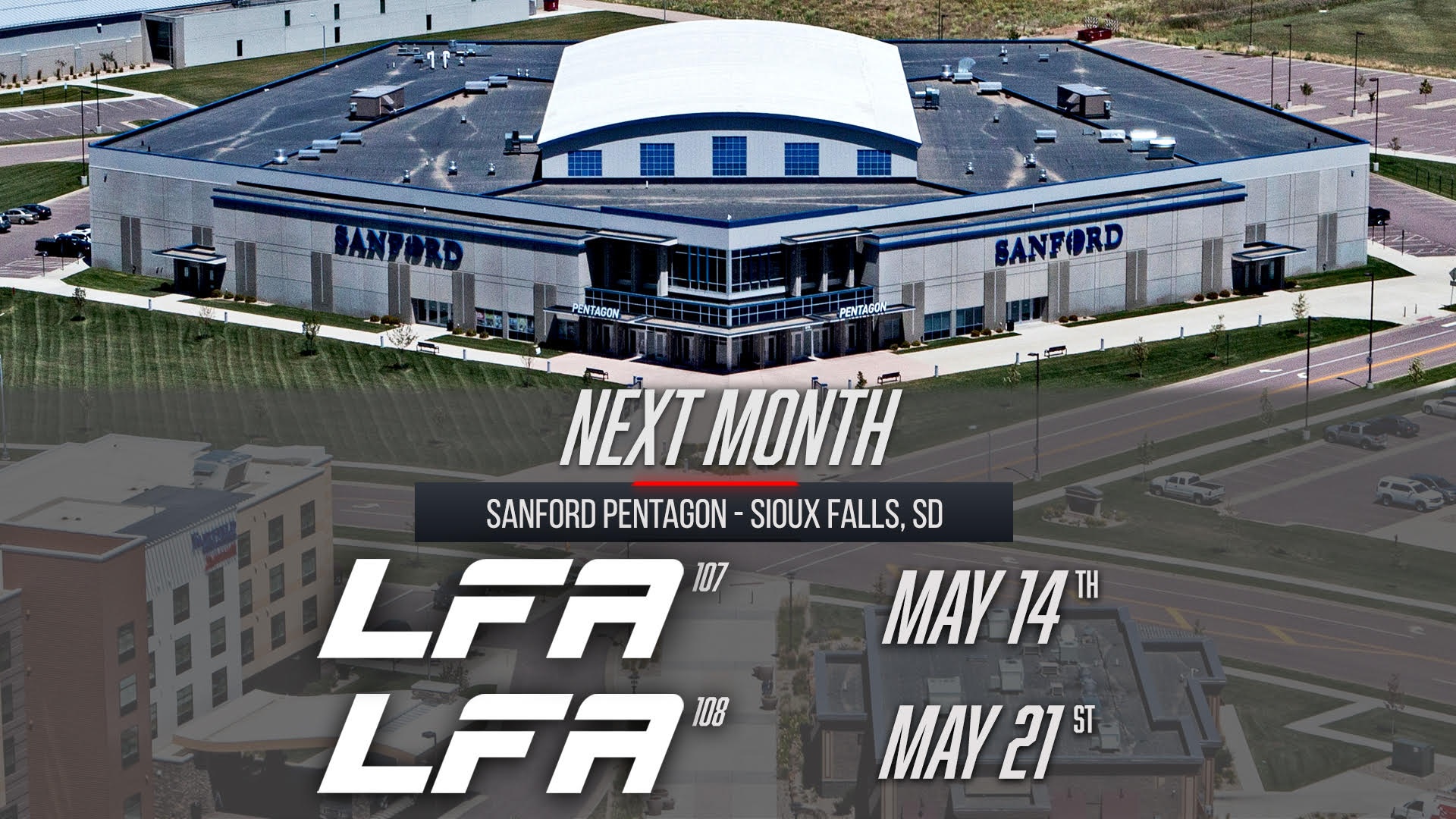 FRIDAY, MAY 14
LFA 107: CARVALHO vs. DAVLATMURODOV

Tickets to LFA 108 available
this Monday at Ticketmaster.com

LAS VEGAS, Nevada — LFA was one of the first sports organizations to return to action last summer and helped usher in a new era of live sports entertainment amid the Coronavirus (COVID-19) pandemic. These events were able to happen due to a strong partnership that LFA has formed with Sanford Health.

LFA 107 on Friday, May 14th will be closed to the general public. LFA 108, which takes place seven days later, on Friday, May 21st will be held with limited capacity.

“We are excited to return to the Sanford Pentagon in Sioux Falls, South Dakota in May,” stated LFA CEO Ed Soares. “On May 14th, former Bellator middleweight champion Rafael Carvalho will face top Tajik prospect Sharaf Davlatmurodov in the main event of LFA 107. Then the following Friday, May 21st, Josh Fremd will meet Gregory Rodrigues in the Middleweight Tournament Final. The bout will serve as the main event of LFA 108 and the winner will become the next LFA middleweight champion.”

LFA 107: Carvalho vs. Davlatmurodov takes place Friday, May 14th. The main event will feature a middleweight showdown between two of the most accomplished fighters in the division. Rafael Carvalho became the fourth middleweight champion in Bellator history when he knocked out Brandon Halsey with a body kick in the main event of Bellator 144. He then went on to defend the title three times. The first two title defenses came against Dutch powerhouse Melvin Manhoef and the third came against longtime UFC veteran Alessio Sakara. In total, Carvalho’s reign over the division lasted 945 days. Now after an 11-fight run in Bellator, that began in 2014, Carvalho will be looking to make a statement in the main event of LFA 107 when he meets Sharaf Davlatmurodov. The man known as “Wolfhound” has emerged as the top fighting talent from Tajikistan after making his professional debut in 2015. The Tajik fighter is currently riding a 5-fight win streak, which includes a win over Bellator middleweight tournament runner-up Brett Cooper.

LFA 108: Fremd vs. Rodrigues takes place Friday, May 21st. The main event will feature a middleweight title fight between two of the most exciting knockout artists in the division. Josh Fremd (7-1) and Gregory Rodrigues (8-3) both earned their shot at the LFA middleweight title by advancing to the finale of the LFA Middleweight Tournament, which began in January. Fremd knocked out Dana White’s Contender Series alum Bruno Oliveira in the first round of their semi-final bout. The knockout came in the main event of LFA 98 and was the third straight highlight reel knockout that Fremd has earned inside the LFA Octagon since signing with the promotion last summer. Now the proud Pittsburgh native will face another dangerous Brazilian. Rodrigues also knocked out a Dana White’s Contender Series alum in his semi-final bout. “Robocop’s” win came against Samoan slugger Al Matavao in the co-main event of LFA 102. Now Fremd and Rodrigues will meet in the tournament finale in what will be one of the most highly-anticipated fights in LFA history.