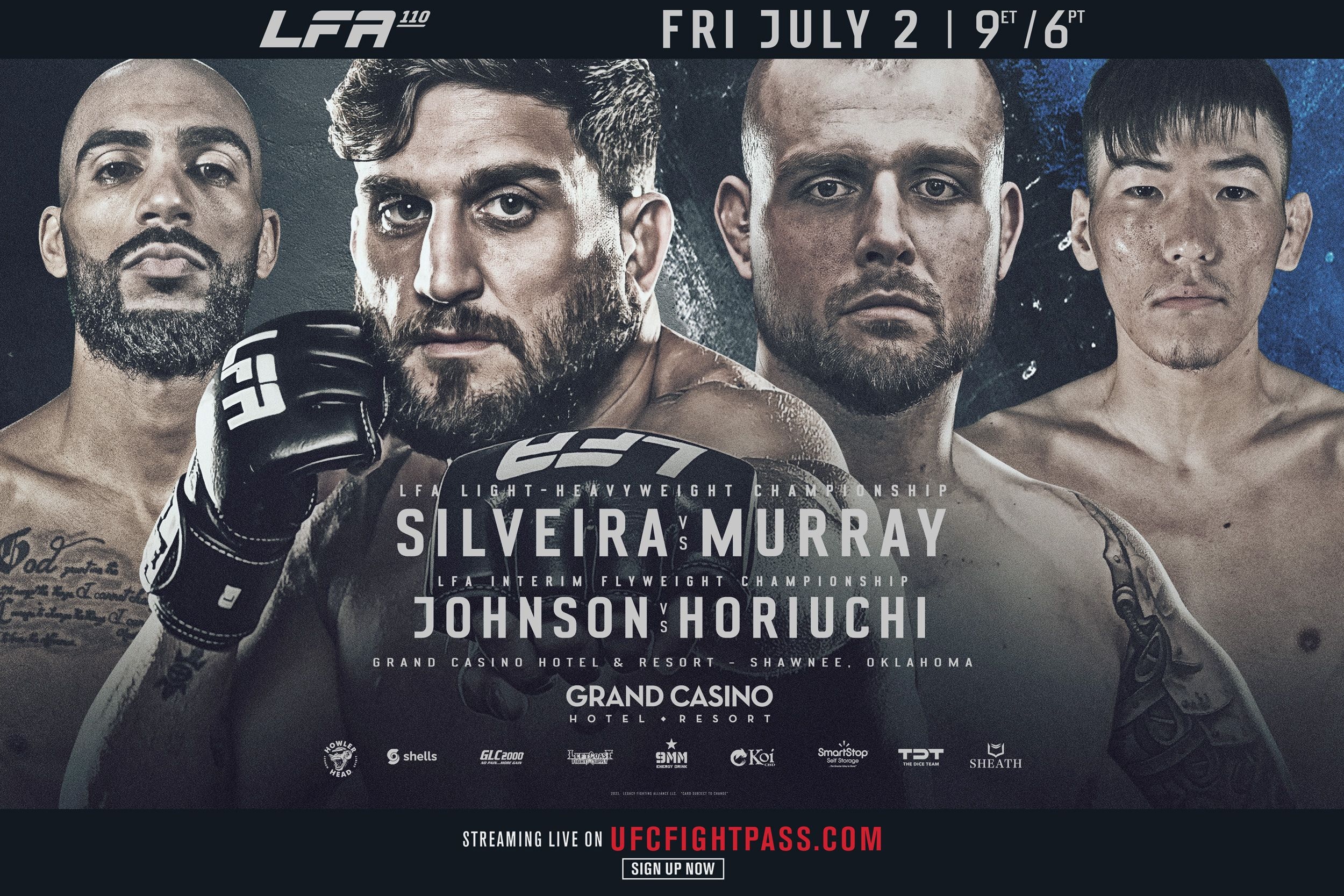 LAS VEGAS, Nevada —LFA CEO Ed Soares announced today that the promotion will return to Oklahoma in July. LFA 110 will feature a Championship Doubleheader when the promotion returns to the Sooner State. This will be the eighth event the promotion has hosted in the OKC area in 2021.

“”We are excited to bring a Championship Doubleheader to Oklahoma in July,” stated LFA CEO Ed Soares. “Joshua Silveira is the top 205-pound prospect in the sport. He will face regional kingpin Jesse Murray for the LFA light-heavyweight title in the main event of LFA 110. Then in the co-main event, Charles Johnson and Yuma Horiuchi will fight for the LFA interim flyweight title. This will keep one of our most stacked divisions busy, while our champion Victor Altamirano gets ready to compete on Dana White’s Contender Series later this year.”

Silveira (5-0) is the son of MMA pioneer and American Top Team (ATT) co-founder Conan Silveira. This has allowed him to grow up training with his father as well as BJJ legend Carlson Gracie and multiple UFC world champions, while also going on to wrestle at the NCAA Division I level at Arizona State University (ASU). The ASU Sun Devil standout will return to the LFA Octagon after winning his first three fights for the promotion in dominant fashion. The first win came in his LFA debut against Fernando Alvarado via Arm-Triangle Choke at LFA 93. The next win came when he submitted BJJ black belt Matt Paul with a Rear Naked Choke at LFA 98. Silveira then submitted former RFA title challenger Rafael Viana with a Rear Naked Choke at LFA 106 to solidify his own shot at an LFA title.

Murray (8-3) will be making his highly-anticipated LFA debut after earning a well-deserved reputation as the most dominant light-heavyweight force to come out of “The Buckeye State” since Stipe Miocic protégé and current UFC standout Aleksa Camur. The man known as “Hollywood” is currently riding a three-fight win streak, but it was his most recent fight that caught the attention of the LFA and MMA pundits alike. That win came against LFA middleweight title challenger and current LFA light-heavyweight standout Tim Hiley in the main event of a regional promotion back home in his native Ohio. The win came just before the global pandemic forced the world to shut down, and now, Murray is looking to add an LFA world title to his already impressive trophy case.

Johnson (8-2) made a triumphant return to the LFA Octagon on the same historic LFA 100 card that Altamirano was crowned champion. The win came via Anaconda Choke against previously undefeated Karlee Pangilinan. More notably, it came after the powerful Midwest wrestler spent time away from his sport and country to study and improve his Muay Thai striking skills by living and training in Thailand.

He will now face Horiuchi (8-3) who is the first professional fighter from Japan to sign with the LFA. He quickly became a fan favorite due to his flashy striking skills, but it was his long-awaited drop to flyweight that created the biggest commotion. This happened when Horiuchi made quick work of Dana White’ Contender Series alum Donavon Frelow via armbar in his 125-pound debut for the promotion at LFA 104.