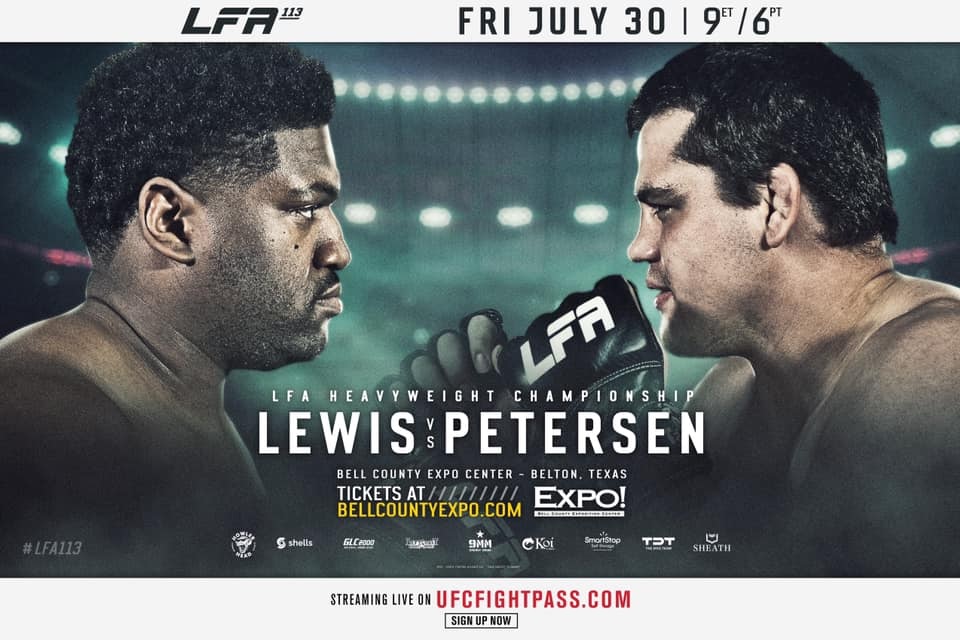 LFA brings the Heavyweight Championship to Texas at LFA 113

LAS VEGAS, Nevada — LFA CEO Ed Soares announced today that the promotion will return to Texas in July. LFA 113 will feature a heavyweight world title fight when the promotion returns to the state of its inception with a live audience for the first time since the start of the pandemic. LFA 113 will be the fourth LFA event to take place in the Centroplex of Texas. It will also be the twentieth time that the LFA has traveled to “The Lone Star State”.

LFA 113: Lewis vs. Petersen takes place Friday, July 30th at the Bell County Expo Center in Belton, Texas, which is located in the Centroplex of Texas. The main event will feature a heavyweight title fight between top contenders Vernon “Big E” Lewis and Thomas “The Train” Petersen. The entire main card will be available worldwide on UFC FIGHT PASS® at 9 p.m. ET / 6 p.m. PT.

“I am excited to bring the LFA heavyweight title to Texas at LFA 113,” stated Soares. “Vernon Lewis and Thomas Petersen are two of the most successful heavyweights in LFA history and are always looking for the knockout. They say everything is bigger in Texas and this fight is no different. On Friday, July 30th at the Bell County Expo Center, the winner will become the third heavyweight champion in LFA history.”

Tickets for LFA 113 – Lewis vs. Petersen are available for purchase NOW at BellCountyExpo.com.

Lewis (8-4) enters his first LFA title fight with the distinction of being the winningest heavyweight in LFA history. The proud Fort Worth police officer, who calls Waco home, will be looking to win LFA gold in front of his home crowd. This would be the crowning achievement, both literally and figuratively, for one of LFA’s most popular fighters. “Big E” began his career with the promotion back with Legacy FC before the merger. It is there where he earned a shot at the Legacy FC title. Now the Texas lawman will be taking that experience and the momentum of a perfect 4-0 run in LFA with him into his first LFA title fight. That flawless run in the LFA includes notable wins over current UFC heavyweight Jared Vanderaa, Jeremy Hardy, Yimaz Wildman, and former NFL football player Austen Lane.

Petersen (4-0) has also grown up in the LFA promotion and is nipping at the heels of Lewis for most wins in the LFA heavyweight division. A win at LFA 113 will tie him with Lewis for the record (4), but more importantly it will earn the young Minnesota native the first world championship of his promising career. Even before turning pro, “The Train” has been unstoppable. Petersen was a two-time state champion out of Lakeville South High School in Lakeville, Minnesota. He was named to the All-State team three years in a row and won 139 matches, which includes 50 pins, and holds the school-record for takedowns in a year with 247 as a senior. He later became an NJCAA national champion at Iowa Central and competed at the NCAA Division I level at North Dakota State University.