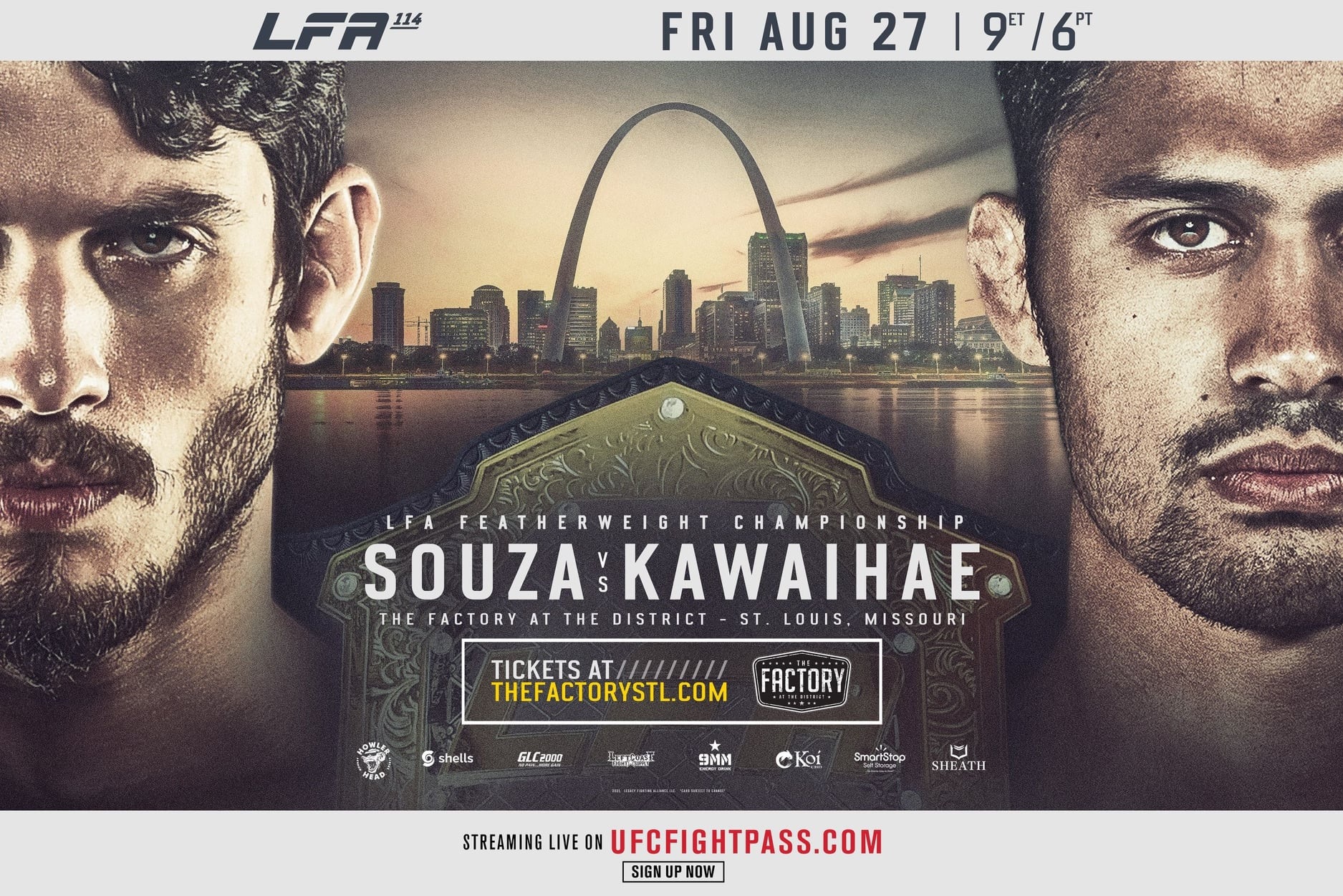 LFA brings the Featherweight Championship to St. Louis at LFA 114

LAS VEGAS, Nevada — LFA CEO Ed Soares announced today that the promotion will return to Missouri in August. LFA 114 will feature a featherweight world title fight when the promotion returns to the Show Me State. This will be the fourth event the promotion has hosted in the state of Missouri.

LFA 114: Souza vs. Kawaihae takes place Friday, Augut 27th at the St. Louis area’s hottest new venue: “The Factory at the District”. This state of the art venue is located in Chesterfield, an upscale community in St. Louis, Missouri.

Tickets are on sale now at THEFACTORYSTL.COM. Special 8 Seat VIP Tables can be reserved by calling 303-521-0966 or online at LFATIX.com.

“We are excited to bring the featherweight championship to St. Louis in August,” stated Soares. “Bruno Souza is an exciting Machida Karate style fighter that has earned four impressive victories inside the LFA Octagon. He will face top Hawaiian prospect Canaan Kawaihae who just secured a nominee for “Submission of the Year” in his LFA debut. They will fight for the vacant LFA featherweight title in the main event of LFA 114.”

Souza (9-1) is a protégé of former UFC light-heavyweight champion Lyoto Machida. The 25-year-old possesses the same elusive and brutally efficient karate style of his sensei. The Machida Karate black belt is currently riding an nine-fight win streak with the last four coming inside the LFA Octagon. Those wins have come over top prospects Mike Hamel, Kamuela Kirk, Guilherme Santos, and Elijah Johns. The most recent win over Johns was his most impressive performance to date. “The Tiger” outlasted his highly-touted opponent in his first main event for the promotion. He did so by earning a hard-fought Split Decision. Now the young Brazilian looks to add LFA gold to his lengthy list of accolades at LFA 114.

Kawaihae (6-1) will be returning to the LFA Octagon after making a huge statement in his LFA debut in April. The Hawaii native needed only 20 seconds to submit former LFA title challenger Jake Childers with a Power Guillotine Choke in the co-main event of LFA 105. This win came on the heels of appearances on Dana White’s Contender Series (DWCS) and Bellator. He was also scheduled to fight at LFA 75, but an injury forced him off the card. Now healed and hungrier than ever, the 23-year-old looks to capture the vacant LFA title. Kawaihae is no stranger to high-profile fights and even higher expectations as he has been training martial arts since he was 7-years-old and made his debut on DWCS when he was just 20-years-old. The BJJ black belt now looks to become the LFA featherweight champion in the main event of LFA 114.