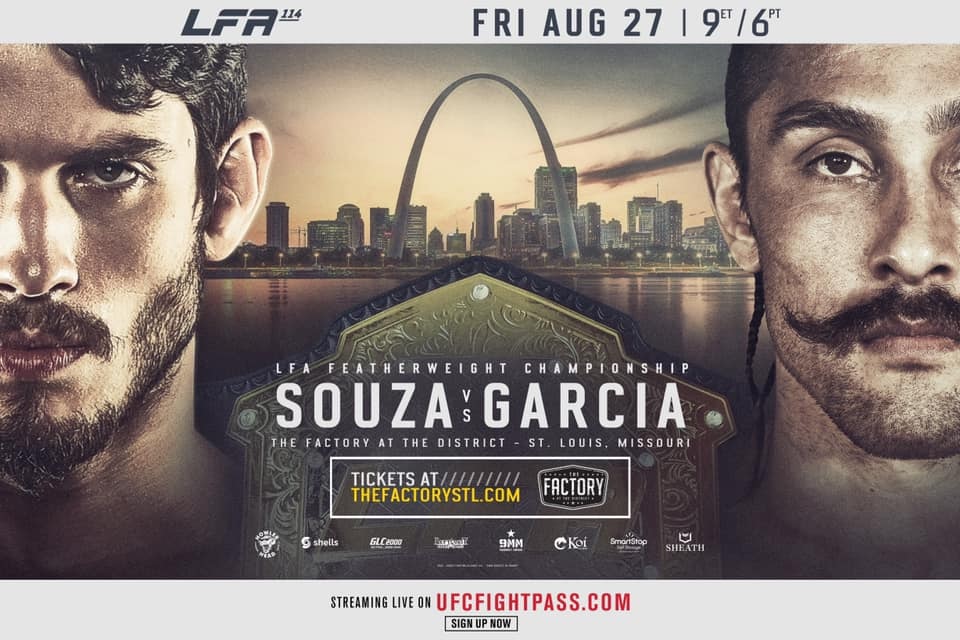 LAS VEGAS, Nevada — LFA CEO Ed Soares announced today that LFA 114 will feature a new featherweight world title fight when the promotion returns to the Show Me State this month. This will be the fourth event the promotion has hosted in the state of Missouri.

Tickets are on sale now at THEFACTORYSTL.COM.

“We are excited to bring the featherweight championship to St. Louis later this month,” stated Soares. “Bruno Souza is an exciting Machida Karate style fighter that has earned four impressive victories inside the LFA Octagon. He will now face top Mexican prospect Javier Garcia. Garcia is replacing Canaan Kawaihae, who will now be competing on Dana White’s Contender Series. Souza and Garcia will fight for the vacant LFA featherweight title in the main event of LFA 114.”

Souza (9-1) is a protégé of former UFC light-heavyweight champion Lyoto Machida. The 25-year-old possesses the same elusive and brutally efficient karate style of his sensei. The Machida Karate black belt is currently riding a nine-fight win streak with the last four coming inside the LFA Octagon. Those wins have come over top prospects Mike Hamel, Kamuela Kirk, Guilherme Santos, and Elijah Johns. The most recent win over Johns was his most impressive performance to date. “The Tiger” outlasted his highly-touted opponent in his first main event for the promotion. He did so by earning a hard-fought Split Decision victory. The young Brazilian will now quickly shift focus from Kawaihae to Garcia as he looks to add LFA gold to his lengthy list of accolades at LFA 114.

Garcia (7-3) will be returning to the LFA Octagon after making a huge statement this past spring. “El Mariachi” created more noise than a mariachi band upon signing with the LFA. The 29-year-old CSW product made his LFA debut at LFA 102 against lauded featherweight prospect A.J. Cunningham. The proud Mexican fighter flipped the script and took home the well-deserved Unanimous Decision victory. Garcia then quickly stepped up to face Hawaiian prospect and Bellator veteran Timothy Teves just 28 days later at LFA 104. Once again, Garcia got his hand raised. However, this time he showed a flair for the dramatic by securing a Triangle Choke victory with 11 seconds remaining. Now he looks to pull the upset once again with the LFA title on the line at LFA 114.