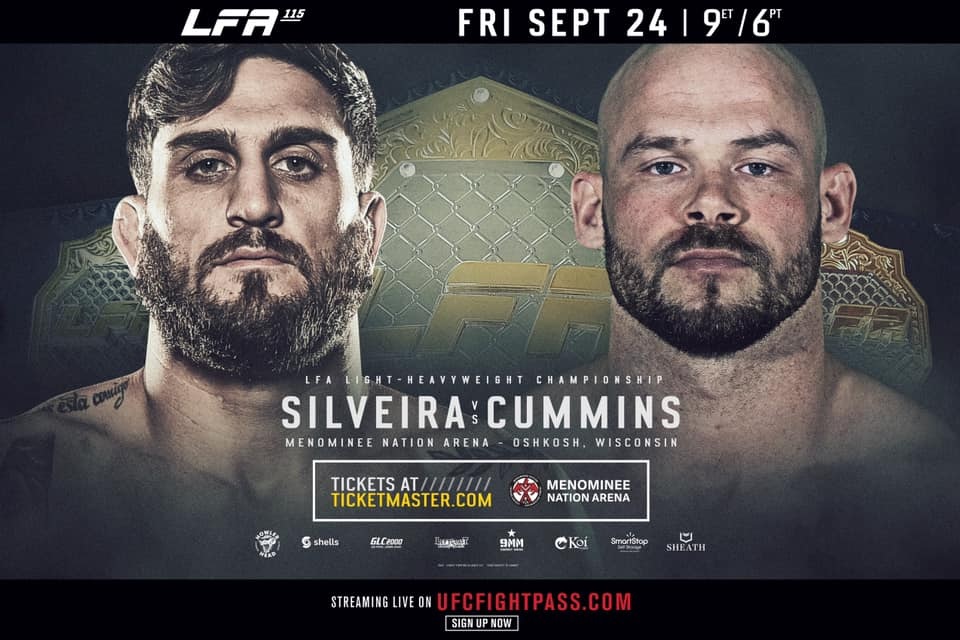 LFA brings the Light-Heavyweight Championship to Wisconsin at LFA 115

TICKETS ON SALE NOW AT TICKETMASTER.COM

LAS VEGAS, Nevada — LFA CEO Ed Soares announced today that the promotion will return to Wisconsin in September. LFA 115 will feature a light-heavyweight world title fight when the promotion returns to the Badger State. The winner will become the fifth 205-pound champion in LFA history. This will be the second event the promotion has hosted in the state of Wisconsin.

Tickets are on sale NOW at Ticketmaster.com.

“We are excited to bring the light-heavyweight championship to Wisconsin next month,” stated Soares. “Josh Silveira is a Division I wrestler and the son of MMA pioneer Conan Silveira. He will face Tee Cummins, who is a top undefeated fighter in both MMA and bare-knuckle boxing. The winner will become the fifth light-heavyweight champion in LFA history. The previous four champions Ryan Spann, Julius Anglickas, Alex Polizzi, and Fabio Cherant are currently fighting in the UFC and Bellator.”

Silveira (5-0) is the son of MMA pioneer and American Top Team (ATT) co-founder Conan Silveira. This has allowed him to grow up training with his father as well as BJJ legend Carlson Gracie and multiple UFC world champions, while also going on to wrestle at the NCAA Division I level at Arizona State University (ASU). The ASU Sun Devil standout will return to the LFA Octagon after winning his first three fights for the promotion in dominant fashion. The first win came in his LFA debut against Fernando Alvarado via Arm-Triangle Choke at LFA 93. The next win came when he submitted BJJ black belt Matt Paul with a Rear Naked Choke at LFA 98. Silveira then submitted former RFA title challenger Rafael Viana with a Rear Naked Choke at LFA 106 to solidify his first shot at an LFA title.

Cummins (4-0) is a top undefeated prospect from Strayhorn, Mississippi that trains just up the road in Memphis, Tennessee. The proud southerner is an avid competitor that has been a triple-threat in MMA, bare-knuckle boxing, and powerlifting for a better part of the past decade. Now that combat sports are Cummins’ main focus, the powerhouse from the south has been unstoppable. After winning his LFA debut in March by knocking out fellow undefeated prospect Anthony Kalani in the main event of LFA 101, Cummins is looking for his first world title in MMA. Fresh off of celebrating his 29th birthday yesterday, Cummins now has that opportunity. That will come in the form of fellow top undefeated prospect and LFA standout Silveira in the main event of LFA 115.