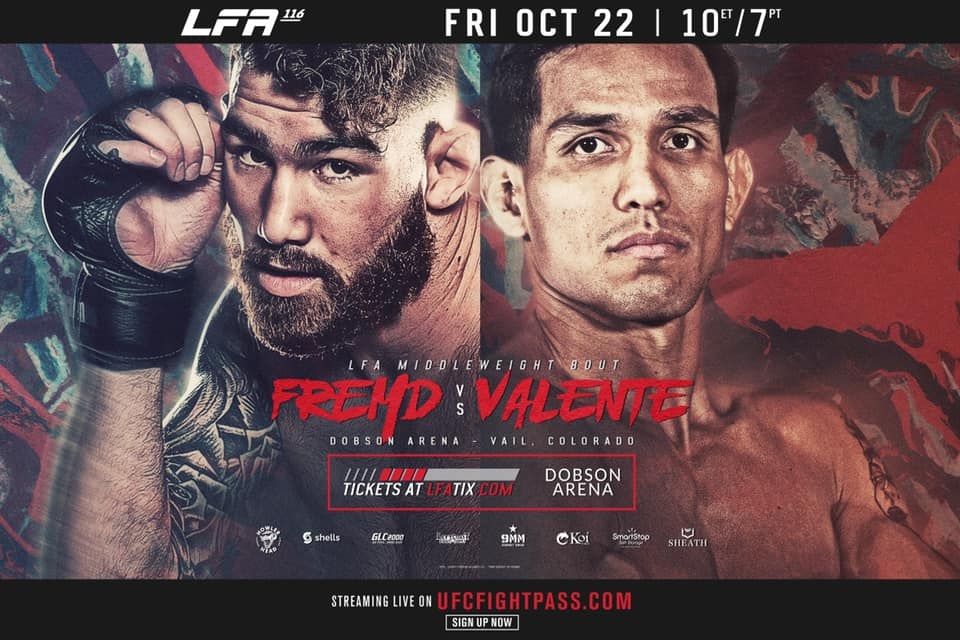 LAS VEGAS, Nevada —LFA CEO Ed Soares announced today that the promotion will return to Colorado in October. LFA 116 will feature a high-stakes middleweight showdown between two of the promotion’s biggest stars when the promotion returns to the Centennial State. LFA 116 will be the third LFA event to take place in the Colorado resort town of Vail.

Tickets are on sale now at LFATIX.com.

“We are excited to bring the LFA back to the beautiful resort town of Vail, Colorado,” stated Soares. “Josh Fremd and Renato Valente are two of our biggest stars and have been on a collision course for months. Fremd is our reigning ‘Male Fighter of the Year’, while Valente just became the first man to defeat Chibwikem Onyenegecha. There will be a lot at stake when they meet in the main event of LFA 116.”

Fremd (7-2) is one of the most exciting prospects in the sport after making the most of his opportunities in 2020. The western Pennsylvania native immediately burst onto the global MMA scene shortly after singing with the LFA. This happened after the 27-year-old made the move to the mountains of Colorado to train at Factory X. It is there, where he began training regularly with Anthony Smith and many other UFC fighters. The improvement immediately showed. Fremd destroyed Lamar Gosey and Contender Series alum Antonio Jones in a span of seven weeks to earn a spot in the LFA Middleweight Tournament. In the first semi-final of the tournament, Fremd scored a third consecutive highlight reel knockout against another Contender Series alum Bruno Oliveira in the main event of LFA 98. The win got him a shot at the LFA middleweight title, which is an outcome he hopes to recreate heading into the main event of LFA 116.

Valente (8-4) is the next exciting LFA middleweight prospect to hail from Brazil. In just the past three months, LFA has sent Brazilian stars Alex “Poatan” Pereira and Gregory “Robocop” Rodrigues to the UFC. Pereira is widely-regarded as the most dangerous striker on the planet, while Rodrigues is the former LFA middleweight champion. In fact, Rodrigues is the man that defeated Fremd in the finale of the LFA Middleweight Tournament to win the LFA title and earn a UFC contract. Those are the same two goals that Valente shares with his countryman. In order to do so, he must also find a way to get past Fremd, the reigning “LFA Male Fighter of the Year. The 29-year-old Brazilian known as “Índio” earned his first LFA main event slot by defeating previously undefeated LFA star and Contender Series alum Chibwikem Onyenegecha. The win came in the co-main event of LFA 110 in Onyenegecha’s home state of Oklahoma