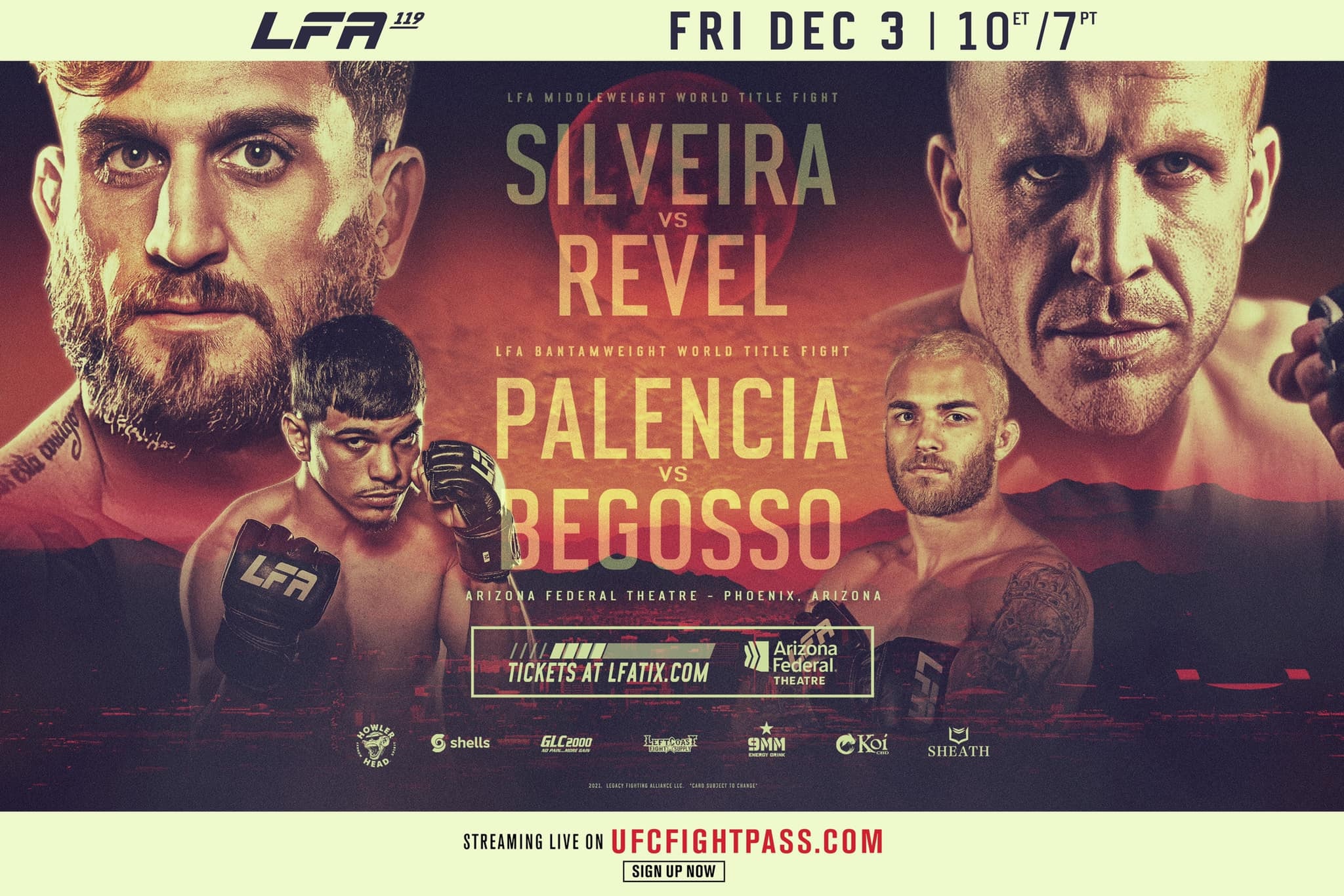 TICKETS ON SALE THURSDAY AT 10:00 AM FROM LIVENATION.COM

LAS VEGAS, Nevada — LFA CEO Ed Soares announced today that the promotion will return to the “Valley of the Sun” in December with a championship doubleheader at LFA 119. This will be the eighth LFA event to take place in the state of Arizona. All eight of these events have taken place at the Arizona Federal Theatre in the state’s capital city of Phoenix.

“We are excited to return to Arizona with two title fights in December,” stated Soares. “LFA light-heavyweight champion Josh Silveira will look to become a two-division champion when he faces Canadian champion Jared Revel for the vacant LFA middleweight title in the main event of LFA 119. The card will also see top undefeated prospects Richard Palencia and Allan Begosso fight for the vacant LFA bantamweight title in the co-headliner.”

TICKETS ON SALE THURSDAY AT 10:00 AM FROM LIVENATION.COM, PRE-SALE TICKETS AND VIP TABLES AVAILABLE NOW AT LFATIX.COM.

Silveira (6-0) is the son of MMA pioneer and American Top Team (ATT) co-founder Conan Silveira. This allowed him to grow up training with his father as well as BJJ legend Carlson Gracie and multiple UFC world champions, while also going on to wrestle at the NCAA Division I level at Arizona State University (ASU). The ASU Sun Devil standout will now return to the LFA Octagon at his former stomping ground after winning the LFA light-heavyweight title in September.

Revel (11-2) is the man standing in Silveira’s way of becoming the LFA’s second-ever champ-champ. The Canadian kingpin known as “The Rebel” is the most decorated middleweight champion hailing from the “Great White North” of Canada. The clinical finisher is riding a 6-fight win streak, which includes a regional title victory, multiple title defenses, and most recently a Unanimous Decision victory in Brazil over longtime UFC veteran and TUF: Brazil 1 finalist Sergio Moraes.

The co-main event of LFA 119 will feature the promotion’s top two 135-pound contenders as they vie to become the LFA’s sixth bantamweight champion. Palencia (9-0) was born and raised in Phoenix and will enjoy the home crowd advantage as he looks to run his impressive record to a perfect 10-0. Three of those wins have come inside the LFA Octagon, which includes a dominant win over Jeimeson Saudino in January. He will face the undefeated Brazilian striker Begosso (6-0-1). The dynamic Team Alpha Male product has picked up highlight reel first round finishes over Sean McPadden and Samarbek Sabyrzhan Uulu since signing with the LFA.