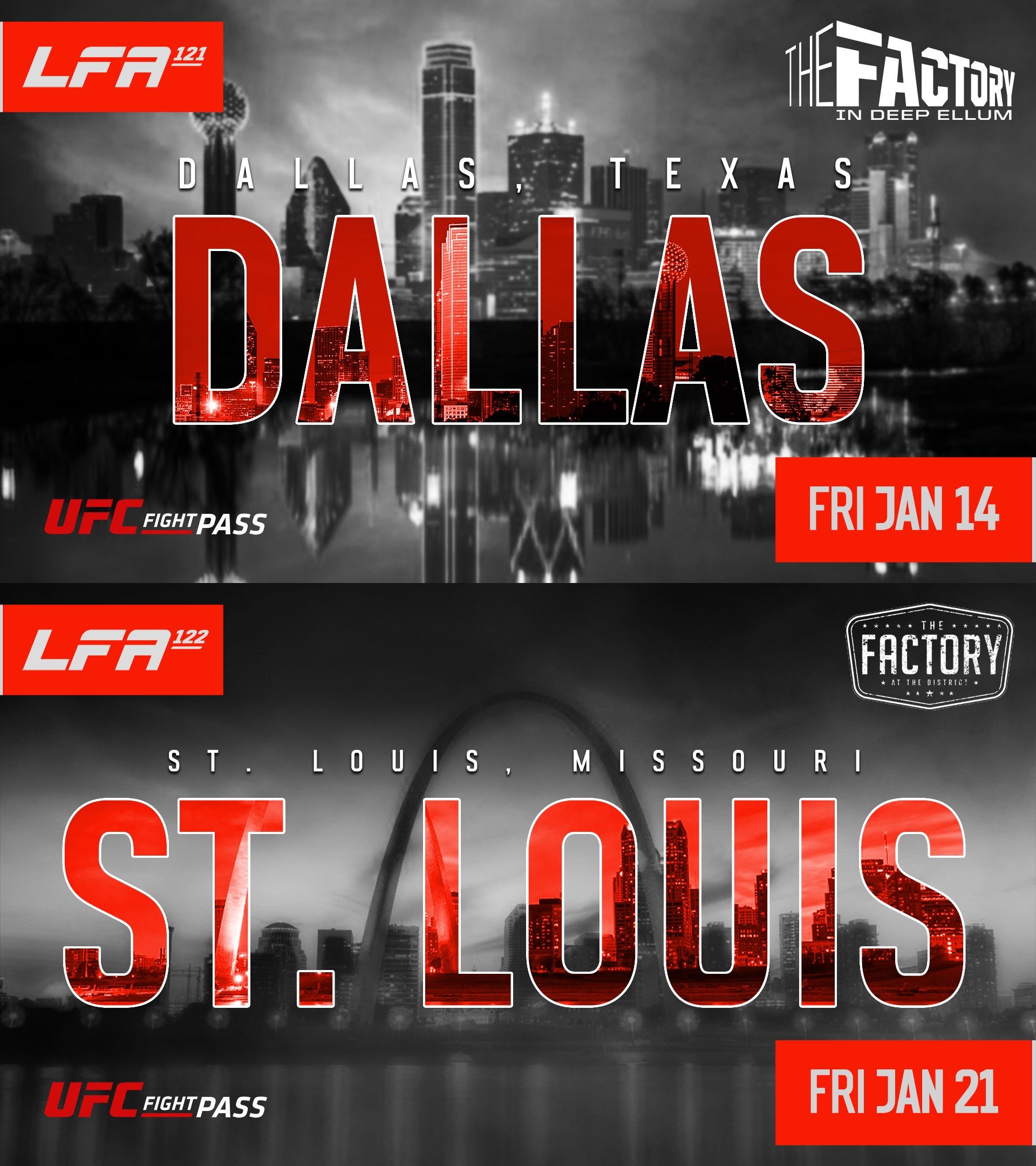 LFA kicks off 2022 with back-to-back events in January

LAS VEGAS, Nevada — LFA President Sven Bean announced today that the LFA has entered into multi event agreements at venues in two of the promotion’s top markets for 2022. Both of these agreements will start with events in January.

“I’m happy to announce that the LFA will kick off the 2022 year with back to back events at two of my favorite venues on our tour route.” said Bean, who handles venue booking and scheduling for the LFA.

“Being an avid music and concert fan, I love to bring the LFA production into what is typically a concert venue. Our footprint seems to fit these types of spaces perfectly, and both The Factory in Deep Ellum in Dallas, and The Factory at the District in St. Louis fit this model to a tee.”

“We will kick off the year on Friday, January 14th in Dallas, Texas. Almost 5 years ago to the day we will return to where it all started, The Factory in Deep Ellum (formerly known as the Bomb Factory). We have a long successful history with the venue and the staff, producing 11 events over the years. We hosted our last show with a live crowd there prior to the pandemic, and I’m very much looking forward to returning to Dallas and one of our best markets “

Eric Bradford, C.E.O. of The Factory in Deep Ellum echoed that sentiment:

“Dallas is the birthplace of LFA, so we’re excited to bring professional Mixed Martial Arts back to The Factory in Deep Ellum. LFA events have always done incredibly well at our venue. Partnering with LFA on a multi-event agreement in the new year solidifies our dedication to bring diverse, sporting events to the region on a consistent basis.”

Tickets for LFA 121 are on sale NOW at TheFactoryInDeepEllum.com.

“Exactly one week later we will return to the St. Louis, Missouri market with LFA 122 at The Factory At The District” continued Bean.

“In August of this year the LFA debuted at this brand new concert venue, being the 4th ticketed event ever in the building. On the original site survey I knew right away that this was a perfect venue for our product and our fans. We had an amazing event and left the building that night knowing we would return. I’m happy to announce that we will return multiple times in 2022 starting on January 21st!”

“The LFA are great partners to work with and really help showcase the flexibility of the The Factory and add to the diversity of our programming. Coming off of a terrific first event, The Factory is excited to continue partnering with LFA on more fantastic MMA events” added The Factory General Manager Brian Carp.

Tickets for LFA 122 are on sale NOW at TheFactorySTL.com.

Look for LFA 121 and 122 Main Event, Feature Bout, and Key Match Up announcements from LFA C.E.O. Ed Soares in the coming days.

About THE FACTORY IN DEEP ELLUM:
The Factory in Deep Ellum is the premiere place to enjoy live music, entertainment, and events in the DFW area. The venue accommodates up to 4,300 fans, consisting of a mezzanine, VIP suites, and premium reserved seating options. The Factory is a state-of-the-art, 50,000 square foot venue located in the heart of Dallas’ world-famous Deep Ellum neighborhood, known for its rich culture of arts and entertainment. For more information, visit TheFactoryDE.com.