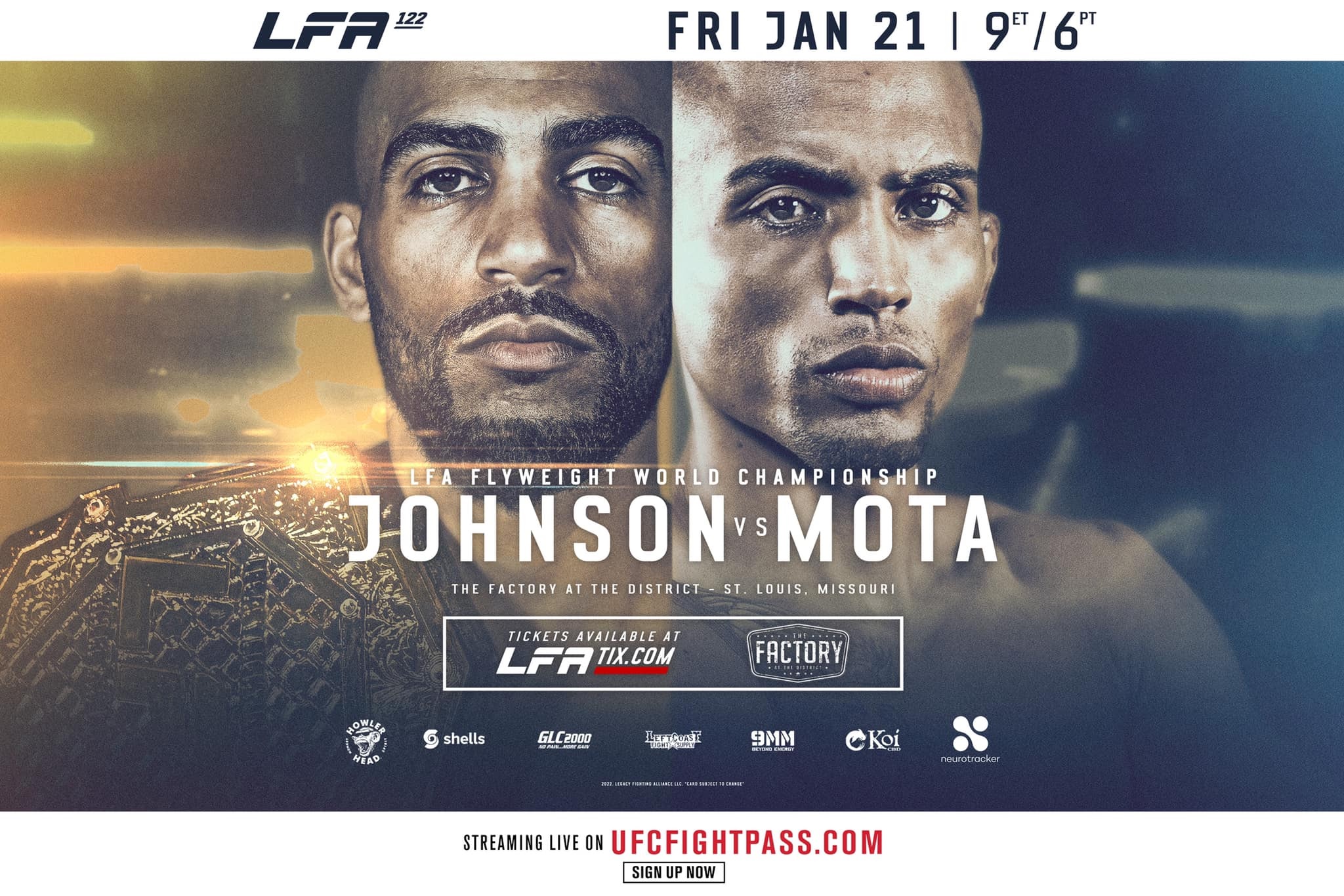 LFA brings the Flyweight Championship to St. Louis at LFA 122

LAS VEGAS, Nevada — LFA CEO Ed Soares announced today that the promotion will return to Missouri in January. LFA 122 will feature a flyweight world title fight when the promotion returns to the Show Me State. This will be the fifth event the promotion has hosted in the state of Missouri.

Tickets for LFA 122: Johnson vs. Mota are on sale NOW at THEFACTORYSTL.COM. Special 8-Seat VIP Tables can be reserved by calling 303-521-0966 or online at LFATIX.com.

“We are excited to bring the flyweight championship to St. Louis in January,” stated Soares. “Charles Johnson had one of the most impressive breakthrough years of any prospect in 2021. He is now our undisputed flyweight champion after going 3-0 last year, which includes winning and defending the interim title. He will now look to defend the undisputed title against Carlos Mota, who was originally set to fight for the title at LFA 100. Mota shined at LFA 112 in Brazil and is eager to get his long-awaited title fight at LFA 122.”

Johnson (10-2) returns home to St. Louis after enjoying a breakthrough year in 2021. The man known as “Inner G” made a triumphant return to the LFA Octagon on the historic LFA 100 card that crowned Victor Altamirano the new flyweight champion. The win came via Anaconda Choke against previously undefeated Karlee Pangilinan. More notably, it came after the Midwest grappler spent two and half years away from MMA to train his Muay Thai striking skills in Thailand. Johnson continued his run by winning the interim title at LFA 110 against Japanese standout Yuma Horiuchi since Altamirano set to compete on Dana White’s Contender Series. Then not wanting to wait for a title unification bout with Altamirano, Johnson defended his interim title against João Camilo eight weeks later at LFA 114. This was the quickest turnaround for a title defense in LFA history. Now with Altamirano in the UFC, Johnson is the undisputed champion.

Mota (6-0) is one of the most promising flyweight prospects to emerge from the MMA hotbed of Brazil in recent years. The Brazilian dynamo burst onto the global MMA scene with a thrilling performance in his North American debut at LFA 79. The jiu-jitsu black belt faced another top undefeated prospect George Martinez that night, but he surprised his American opponent with a body kick KO just 36-seconds into their encounter. The win earned him a shot at the title at LFA 100, but travel issues from his native Brazil prevented his title fight against Altamirano. Mota then set his sights on fighting on the first LFA event in Brazil this past July, but when his opponent was forced to withdraw at the LFA 111 weigh-in, the always game Mota moved up two weight classes and defeated Jeferson Oliveira just two days later at LFA 112. Now the 26-year-old is looking to become the first Brazilian to capture the LFA flyweight championship.