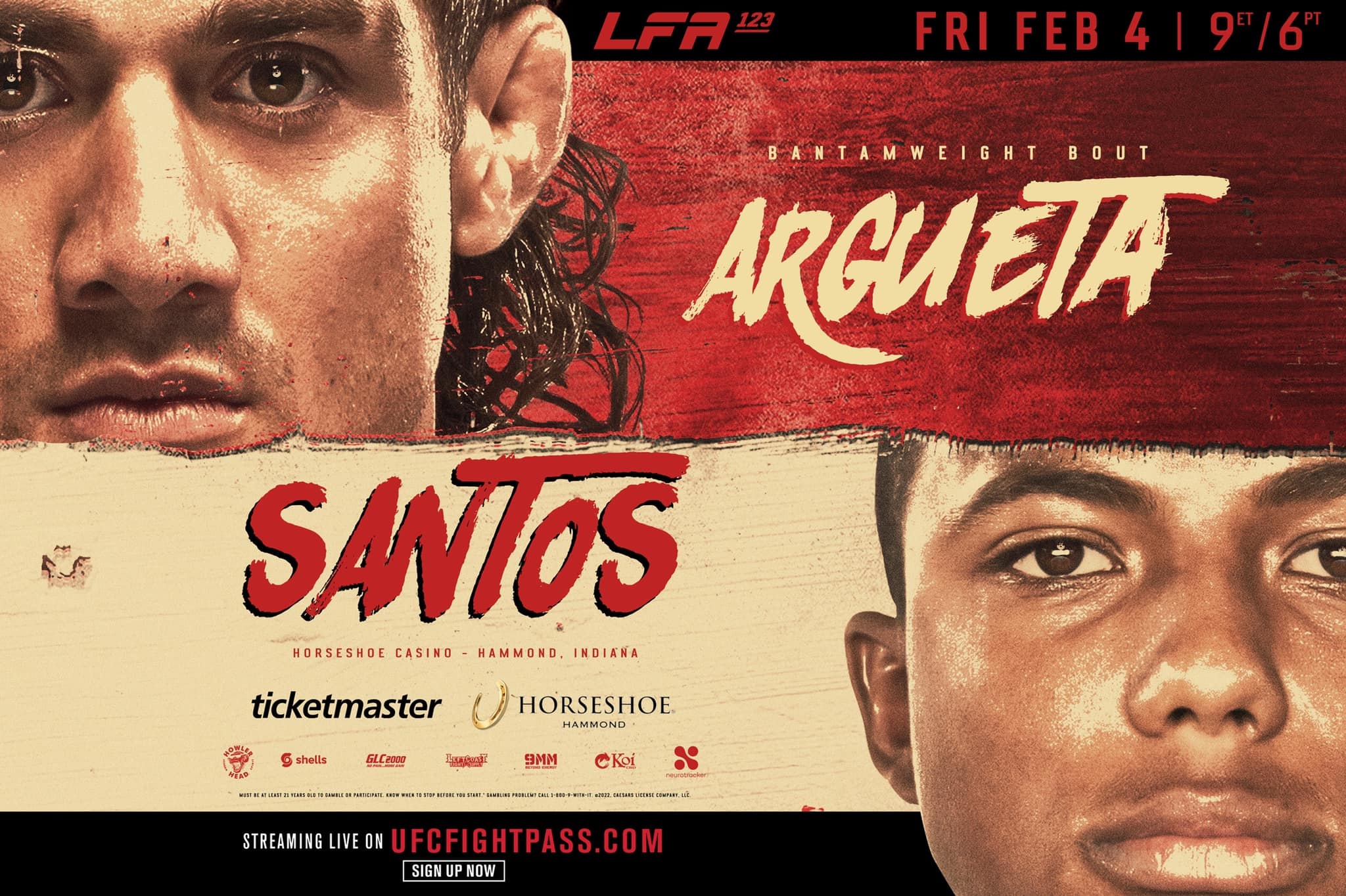 “THE DETERMINED”
DANIEL ARGUETA
vs.
“A LENDA”
MAIRON SANTOS

LAS VEGAS, Nevada — LFA CEO Ed Soares announced today that the promotion will make its first trip to Indiana in February. LFA 123 will feature a bantamweight showdown when the promotion heads to the northwestern part of the state located on the border of Chicago. RFA hosted one event in the “Hoosier State” before the merger of RFA and Legacy FC that created LFA.

LFA 123: Argueta vs. Santos takes place Friday, February 4th at The Horseshoe Casino Hammond in Hammond, Indiana, which is located in the Chicago metro area. The main event will feature a bantamweight showdown between top undefeated prospects Daniel “The Determined” Argueta and Mairon “A Lenda” Santos. The entire main card will be available worldwide on UFC FIGHT PASS® at 9 p.m. ET / 6 p.m. PT.

Tickets for LFA 123: Argueta vs. Santos are on sale NOW at Ticketmaster.com.

“We are excited to bring the LFA to Chicagoland in February,” stated Soares. “Daniel Argueta has grown up inside the LFA Octagon as he made his pro debut for us back at LFA 65. Half of his wins have been in the LFA and now he gets a chance to return home to the Chicago area to headline LFA 123. He will face Mairon Santos, who is one of the most exciting prospects in Brazil. Santos is 21-years-old and has already compiled a 12-0 record since turning pro three years ago.”

Argueta (6-0) returns home to Chicagoland after enjoying an impressive MMA career over the past three years. In that time, the dynamic Cub Swanson protégé has won all six of his fights since turning pro. That includes three fights inside the LFA Octagon and a stint on the UFC’s hit reality show The Ultimate Fighter 29 (TUF 29). Argueta was coach Brian Ortega’s first overall pick on TUF 29, which aired on ESPN+ and quickly earned him a loyal fan following due to his affable personality and fan friendly fighting style on the show. Argueta most recently earned a submission win at LFA 116 in Vail, Colorado, which is the same town where his pro career began. Now the Orland Park, Illinois native is looking to pick up a win close to home in the main event of LFA 123.

Santos (12-0) is one of the most highly-touted prospects in all of MMA. The Brazilian dynamo quickly made his presence felt competing in his native Brazil as well as western Africa by rattling off a staggering 10 wins in his first 12 months as a professional fighter. What makes this even more impressive is the fact that the Niterói native began that streak shortly after his 18th birthday. The streak included claiming the Shooto Brasil featherweight title with one of the top knockouts of 2020. The win came courtesy of a creative upward elbow followed by two crushing body shots that folded the previously undefeated Julio Pereira. Now the young Gilliard Parana protégé is looking to take out another undefeated prospect when he makes his North American debut at LFA 123.