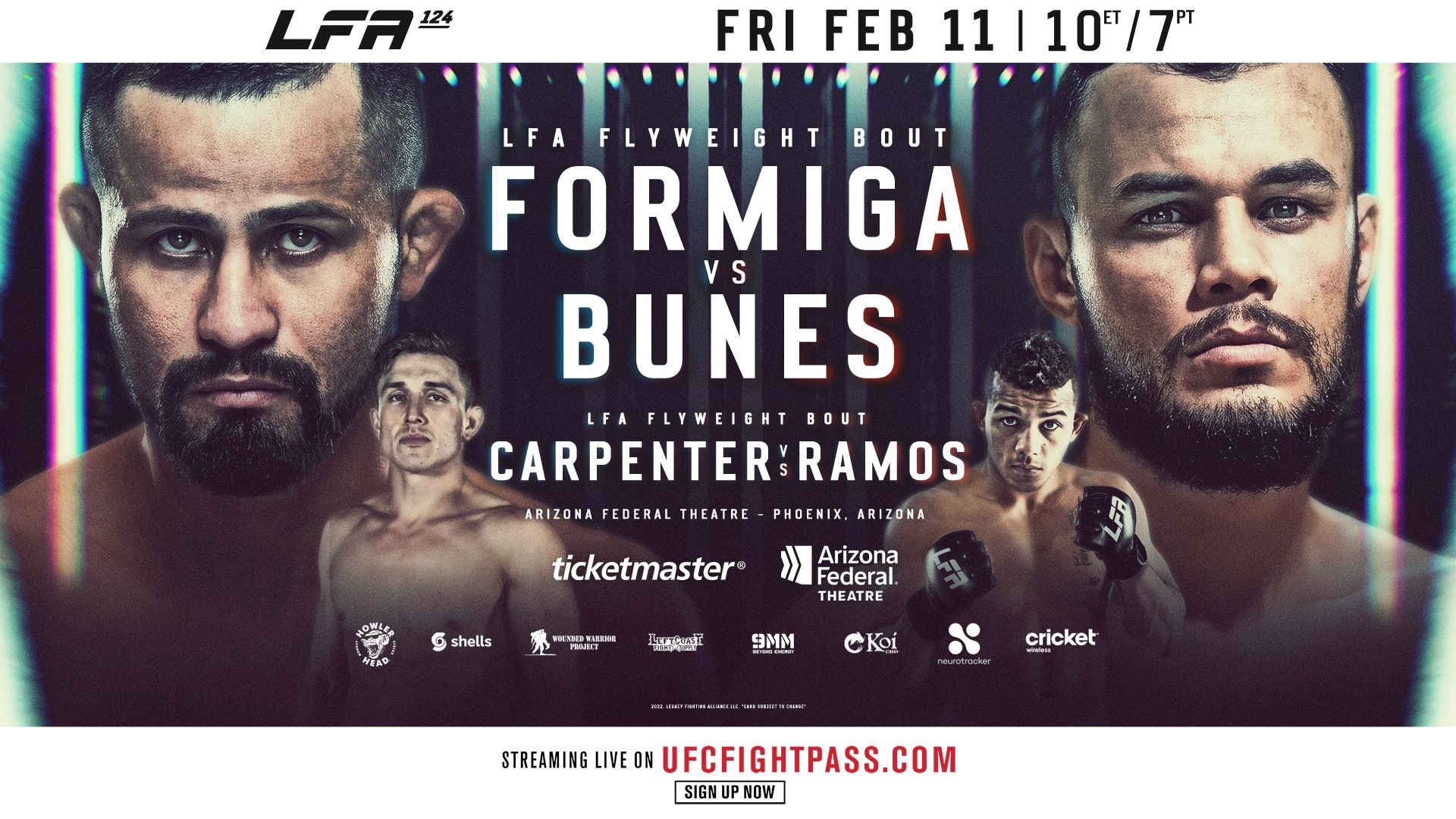 Tickets are available at Ticketmaster.com

LAS VEGAS, Nevada — LFA CEO Ed Soares announced today that the promotion will kick off Super Bowl weekend with a flyweight showdown in the “Valley of the Sun” at LFA 124. This will be the ninth LFA event to take place in the state of Arizona. All nine of these events have taken place at the Arizona Federal Theatre in the state’s capital city of Phoenix.

Tickets for LFA 124: Formiga vs. Bunes are available for purchase through Ticketmaster.com.

“We are excited to kick off Super Bowl weekend in Arizona at LFA 124,” stated Soares. “Jussier Formiga is one of the fighters that helped establish the UFC flyweight division. Over the past decade, he has defeated some of the biggest names in the sport. He will face Pitbull Brothers product and fellow Brazilian standout Felipe Bunes in a pivotal bout in our stacked 125-pound division.”

Formiga (23-8) is one of the men that pioneered the UFC flyweight division when the industry leader added the division in 2012. Since that time, Formiga fought for the promotion a total of 16 times and holds the notable distinction of having victories over Deiveson Figueiredo, Alexandre Pantoja, and Sergio Pettis.

Formiga’s win over Figueiredo also adds extra intrigue to Formiga signing with the LFA, because now that Figueiredo successfully avenged his loss to Moreno this past weekend at UFC 270 to regain his UFC flyweight title, there remains only one man that he has not settled the score with. That would be Formiga.

Bunes (11-5) is the man standing in the way of Formiga’s lofty plans and he happens to have in-depth knowledge of Formiga heading into his encounter with his fellow Brazilian compatriot. This is because Bunes is the man that was Figueiredo’s main training partner leading up to his title fight victory this past weekend and Figueiredo possesses first-hand knowledge of who Bunes will be facing. Bunes also holds a wealth of international MMA experience and a BJJ black belt to match-up against the longtime UFC veteran and BJJ black belt.

The co-main event of LFA 124 will feature two of the most promising prospects in the flyweight division. Carpenter (5-0) is one of Arizona’s fastest rising stars and will enjoy the home crowd advantage as he looks to add to his perfect record. Three of those wins have come inside the LFA Octagon, which includes a 13-second Head Kick knockout over Rodney Kealohi last month.

He will face the dynamic Brazilian grappler Ramos (4-1). The BJJ black belt is the husband of newly crowned LFA Female Fighter of the Year Jaqueline Amorim and looks to join his wife as one of the promotion’s top stars.