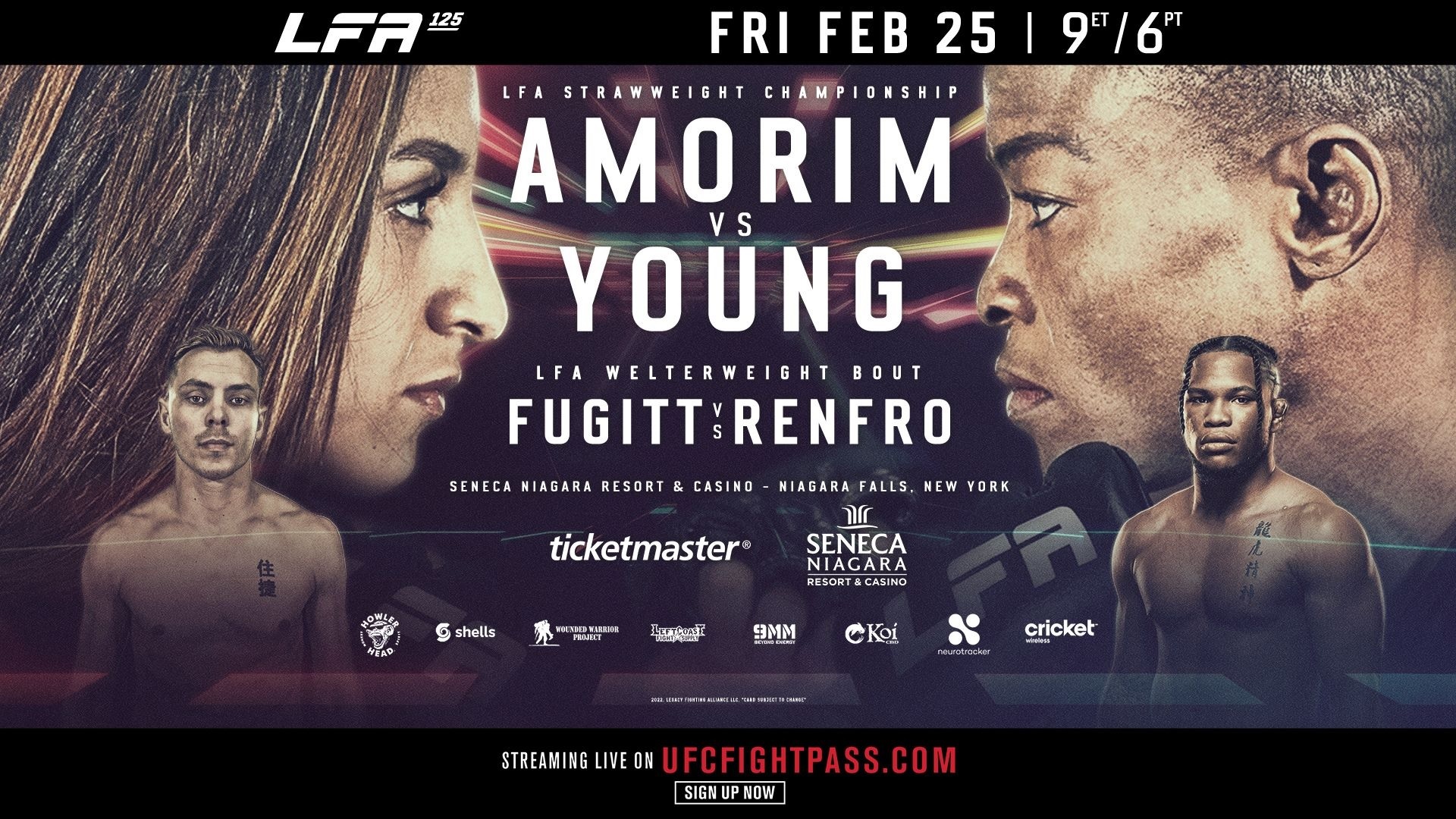 “We are excited to bring the women’s strawweight championship to New York at LFA 125,” stated Soares. “Jaqueline Amorim is a BJJ world champion and Loveth Young is a kickboxing world champion. They were originally scheduled to fight for the title back in November, so the anticipation of this fight is at an all-time high. The winner will become the fourth strawweight champion in LFA history. The venue has a long history of combat sports with their Seneca Fight Night Series, and this Championship bout is a perfect way for the LFA to add to that tradition.”

Tickets for LFA 125: Amorim vs. Young are available for purchase through Ticketmaster.com.

Amorim (4-0) was one of the most high-profile free agent signings of 2021 and she backed up the substantial hype shortly after signing with the LFA. The multiple-time BJJ world champion was born into the world of combat sports in Manaus, the state capital of Amazonas in northwestern Brazil. At the age of 6, Amorim signed on to ASLE, one of the top jiu-jitsu academies in the world. This is the same academy where UFC star Ronaldo “Jacare” Souza and LFA star Ary Farias were developed prior to making the move to MMA. Amorim trained and competed extensively in Brazil and received her BJJ black belt shortly after her 20th birthday. One year later, she and her husband Windson Ramos were invited by BJJ legend Leozinho Vieira to move to Charleston, South Carolina. The re-location allowed Amorim to train, teach, and compete regularly on the IBJJF circuit. It also allowed her to sign with the LFA where she has set multiple records in her two fights with the promotion. Those LFA accolades include the fastest and third fastest finishes by a woman in LFA history for her 10-second knockout victory at LFA 110 and 33-second submission victory at LFA 101. Her win at LFA 110 is also the third fastest overall finish in LFA history. These accomplishments earned her LFA Female Fighter of the Year honors.

Young (3-1-1) is the most decorated female combat sports athlete from Nigeria, which is Africa’s most populated country. She proudly carries the lofty expectations of a continent on her shoulders as Africa is looking for its first female MMA star to join the ranks of current UFC champions Kamaru Usman, Israel Adesanya, and Francis Ngannou. The multiple-time kickboxing world champion and national boxing champion also holds a national title in wrestling, but it is her striking prowess that has taken the MMA world by storm. The police officer known as the “Nigerian Terminator” possesses some of the most devastating knockout power in all of women’s MMA. Young’s crushing power was on full display in her LFA debut at LFA 81, when she engaged in a bloody war with Vanessa Demopoulos. The back-and forth affair ignited a whole new level to Young’s game that was impossible for her next two opponents to handle. The first of the two to be “terminated” was southern California’s Reena Norville at LFA 94, where the fierce Nigerian striker landed a highlight reel walk-off knockout win in the first round. Three months later, Young pummeled RFA standout and firefighter Kelly D’Angelo en route to a violent TKO stoppage at LFA 97. Now she has her sights set on Amorim in their long-awaited title fight.

The co-main event of LFA 125 will feature two of the most exciting prospects in the welterweight division. Renfro (8-2) is upstate New York’s top prospect and he will enjoy a huge home crowd advantage during the LFA’s first trip to the Empire State. The Buffalo native known as “The Black Dragon” is coming off an appearance on Dana White’s Contender Series and will be looking for a statement win after being on the wrong end of a controversial Split Decision in front of the UFC boss.

He will face Fugitt (7-2) who is the most decorated 170-pound champion in the Pacific Northwest. The Art of War product from Eugene, Oregon has won three bouts and multiple titles since making his LFA debut 3 1/2 years ago at middleweight. All three wins during his current streak have come via stoppage, which includes a Kimura submission win against TUF 15 alum Johnavan Vistante.