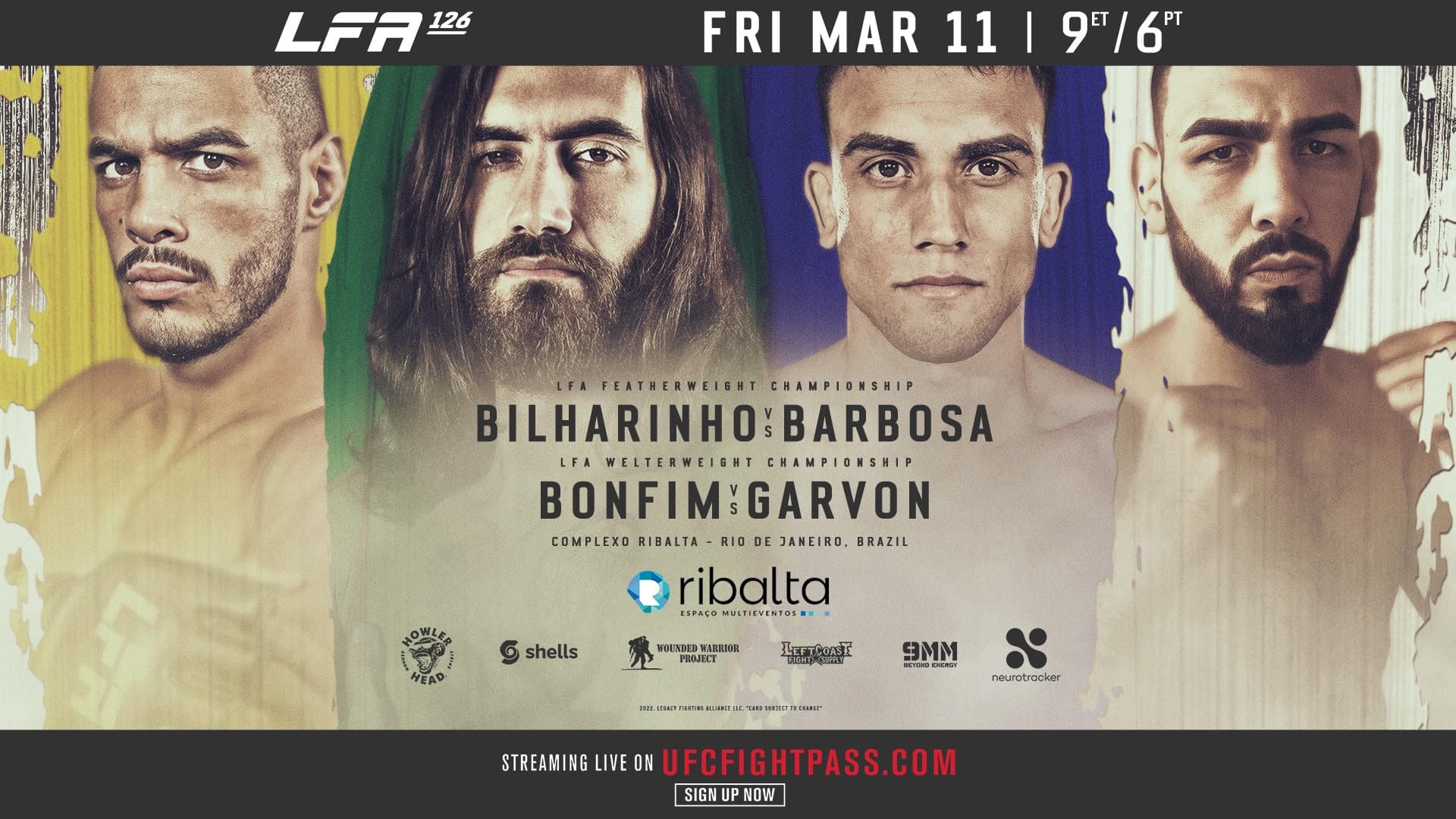 LAS VEGAS, Nevada — LFA CEO Ed Soares announced an update today for the promotion’s previously announced return to Brazil. LFA 126 in March will be topped with a championship doubleheader, but a change was made in one of them. The featherweight and welterweight titles will both be on the line after previous champions Bruno Souza and Carlos Leal signed with the UFC and PFL respectively. This will be the third LFA event to take place in Rio de Janeiro, Brazil after the promotion’s international expansion took place last summer.

“We are excited to feature two LFA title fights when we return to Brazil at LFA 126,” stated Soares. “Jonas Bilharinho and Rafael Barbosa are two of the top prospects in the world. Bilharinho is coming off a highlight reel knockout win on Dana White’s Contender Series, while Barbosa has two wins inside the LFA Octagon including one on Dana White: Lookin’ For A Fight. They will fight for the vacant featherweight title. Then in the co-main event, Gabriel Bonfim and Eduardo Garvon will fight for the vacant welterweight title. Garvon is replacing Quemuel Ottoni, who withdrew from the fight with an injury.”

Barbosa (14-4) makes his return to the LFA Octagon after shaking up the division in 2019. The man known as “Coxinha” used his world-class karate skills to do so. Barbosa started by winning his LFA debut with UFC President Dana White sitting cageside. His win over Cameron Graves at LFA 63 was featured on the Season 4 premiere of Dana White: Lookin’ for a Fight. In fact, White heaped praise on Barbosa during the buildup to the fight, “Barbosa is 10-1…he’s 21-years-old though. This kid has so much more time to learn and grow.” That growth continued in the main event of LFA 68, where he scored a beautiful standing elbow knockout win over former LFA title challenger Nate Jennerman. Now at the age of 24, Barbosa looks to claim LFA gold in his home country.

The co-main event of LFA 126 will now feature two of the top 170-pound prospects in Brazil as they vie to become the LFA’s seventh welterweight champion and third consecutive Brazilian to win the title. Bonfim defeated Brenner Alberth via TKO at LFA 112 in the third round of their semi-final bout in a fight that won LFA Fight of the Year. However, the punishment dished out between the two undefeated prospects prevented Bonfim from continuing in the tournament. He will now get his chance at LFA gold in the main event of LFA 126.

Garvon will be stepping in for Ottoni, who had to withdraw from the title fight with an injury. The talented Muay Thai based fighter known as “Matrix” earned his shot at the title based on a body of work that now has him ranked as one of the top welterweights in South America. That includes a recent regional title victory against Ueliton Lopes in his home state of Paraná in southern Brazil. He secured the win with a vicious head kick that he followed with an onslaught of strikes on the ground that brought a stop to the fight via second round TKO.