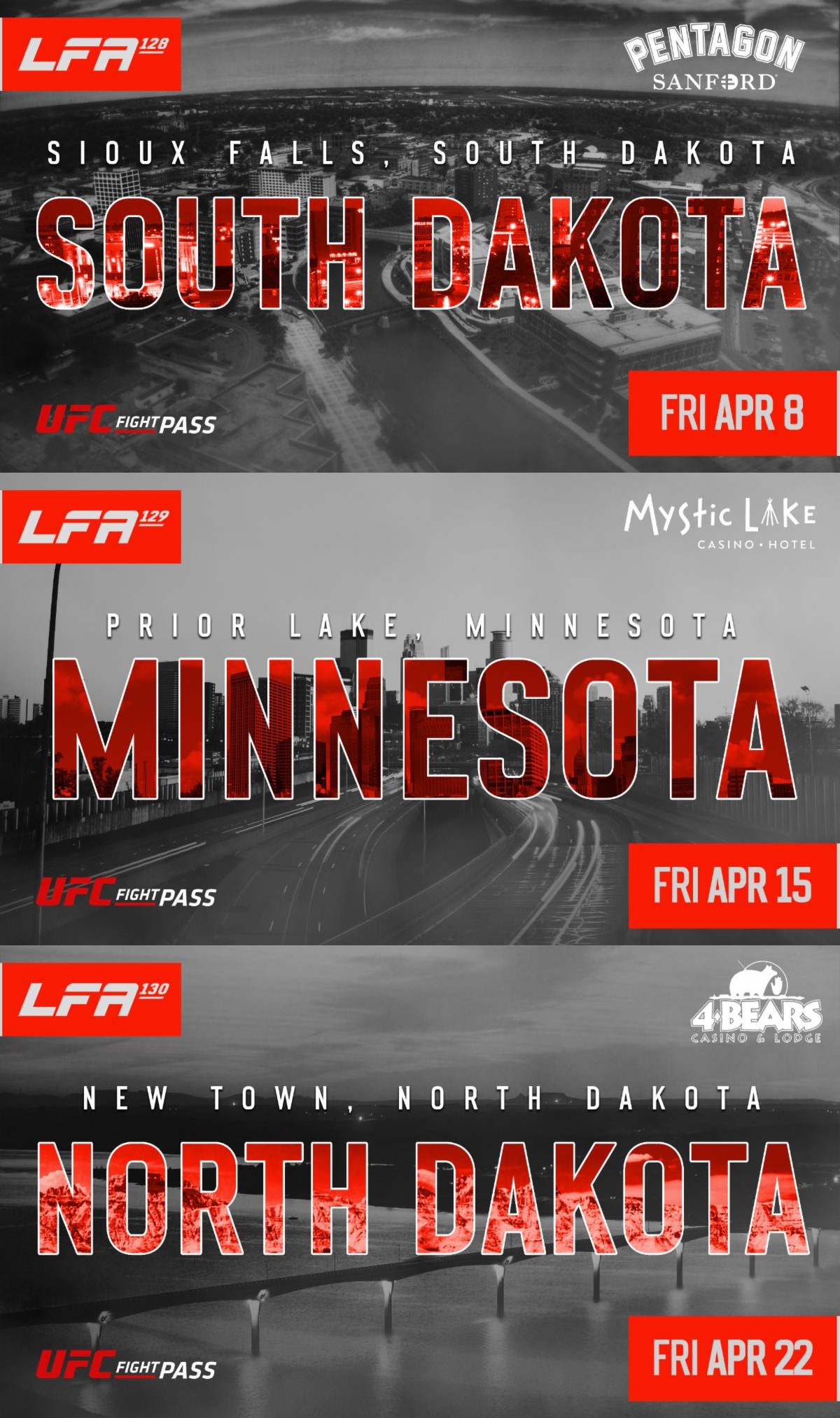 “I’m happy to announce that the LFA will produce three events in three states during the month of April. We are going to host events in South Dakota, Minnesota and North Dakota. The events will run back to back for 3 weeks straight, and we’re referring to it as our LFA Midwest Tour.” said Bean, who handles venue booking and scheduling for the LFA.

“We are kicking it off in Sioux Falls, South Dakota at the Sanford Pentagon. We have a long history of amazing events there dating back to 2014. Sioux Falls and the Sanford Pentagon feel like a home away from home for us at this point. I’m excited to work with their team again and look forward to producing a successful event on April 8th,” stated Bean.

“We are looking forward to the LFA returning to the Pentagon in April. The LFA team are awesome to work with and always produce a top-notch event. The promotion is very popular here in Sioux Falls and has created a loyal local fanbase. We expect another packed house on April 8th.”

Tickets for LFA 128 will go on sale March 8 at Ticketmaster.com and the Pentagon Box Office.

LFA 128 will be broadcast live at 6PM PST/9PM EST on UFC FIGHT PASS.

“The following week we will head to Minnesota for LFA 129 at Mystic Lake Casino Hotel on April 15th. This is another venue we have a long standing history with and some of the best events we have ever produced have been on this property. Jeremy Bjornberg was instrumental in creating the venue partnership, and we owe a lot of our success in the region to his efforts. We have a big show planned inside the showroom for stop number two on the tour,” Bean added.

“Working with LFA on events at Mystic Lake Casino has been awesome. They are the true development league in the sport and have created the reputation of being a ‘must see event’ in the region for MMA fans. I’m excited for what we have in store for them in April,” stated Jeremy Bjornberg of Sterling Entertainment Group.

Tickets for LFA 129 will go on sale 12:00 Noon, Friday, March 4 at Ticketmaster.com and the Mystic Lake Box Office.

LFA 129 will be broadcast live at 6PM PST/9PM EST on UFC FIGHT PASS.

“I am super excited to announce that we will conclude the LFA Midwest Tour by adding a new venue partner and another state to the list. We recently inked a multi-event agreement with the 4 Bears Casino and Lodge in New Town, North Dakota. The property is known for its state of the art event center, which has hosted national concert acts, rodeo, and televised pro boxing events. It is perfectly suited for the LFA product and I can’t wait to show the North Dakota fans what an LFA event is all about,” Bean continued.

“We are looking forward of course to the inaugural LFA event on Friday April 22nd but also glad to have two other MMA Fights booked with quality fighters and matchups for the fall of 2022 and Spring of 2023,” added Pat Packineau, C.O.O. of 4 Bears Casino.

Tickets for LFA 130 will go on sale at 12:00 Noon, Wednesday, March 9th at 4BearsCasino.com and the 4 Bears Casino Box Office.

LFA 130 will be broadcast live at 6PM PST/9PM EST on UFC FIGHT PASS.