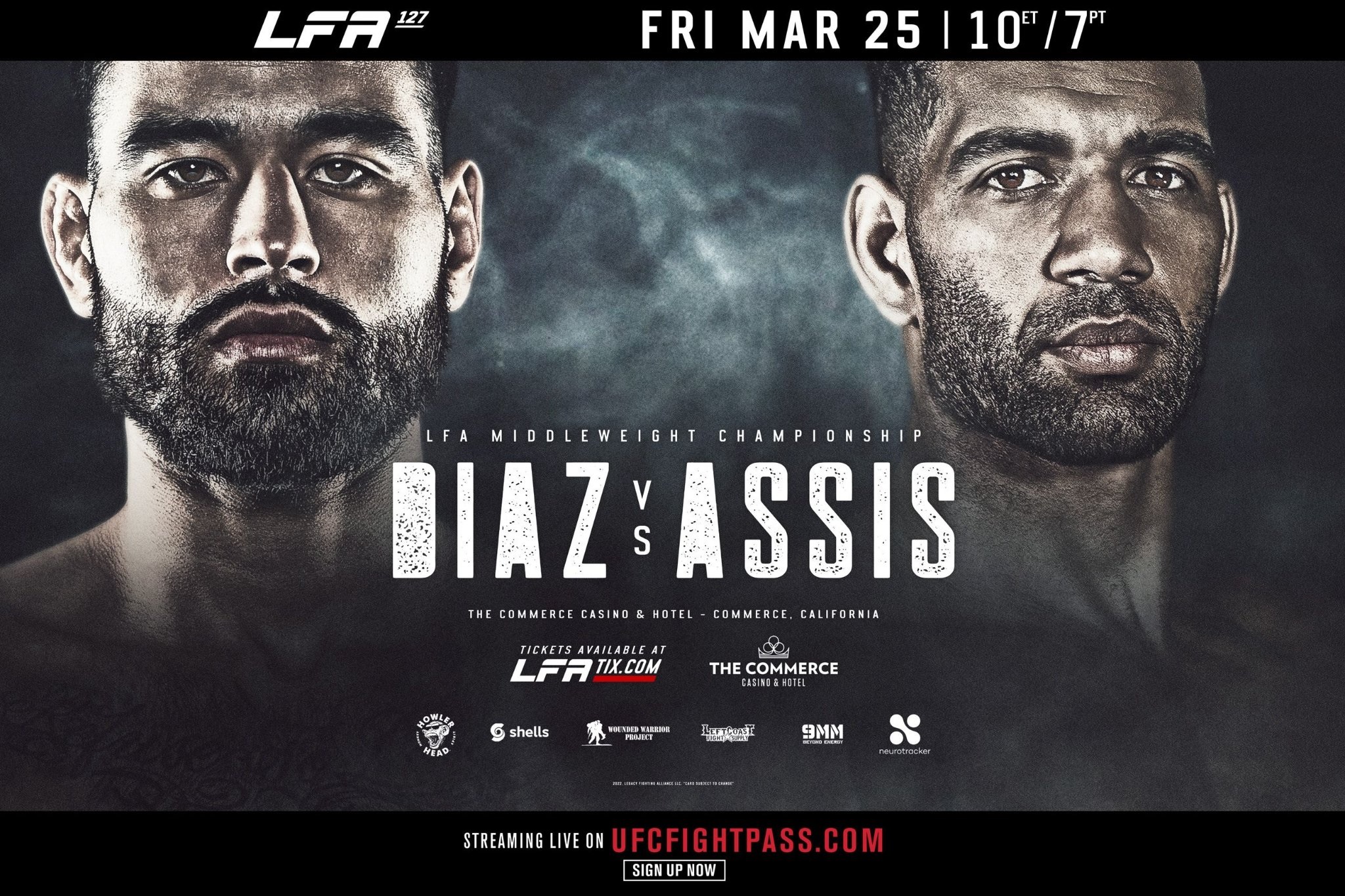 LFA brings the Middleweight Championship to southern California at LFA 127

LAS VEGAS, Nevada — LFA CEO Ed Soares announced today that the promotion will return to California later this month. The main event of LFA 127 will feature a middleweight world title fight between two of the sport’s most exciting prospects. LFA 127 will be the twelfth LFA event to take place in the state, while the main event will crown the eighth 185-pound champion in LFA history.

“We are excited to bring the LFA back to southern California,” stated Soares. “Ozzy Diaz and Bruno Assis are two of the most exciting middleweight prospects on the planet. Diaz is a prolific knockout artist, while Assis is one of the most decorated grapplers in the sport. The world will be watching when we crown our next middleweight champion at LFA 127.”

Tickets for LFA 127: Diaz vs. Assis are available for purchase through LFAtix.com.

Diaz (6-1) is one of the most exciting middleweight prospects to come out of the MMA hotbed of southern California in recent years. The 31-year-old CMMA product has built his popularity on the strength of a fan-friendly fighting style that has never seen him go past the second round in any of his fights. The knockout artist’s reputation was on full display in his LFA debut when the Los Angeles native needed only 96-seconds to knockout the previously undefeated Logan Woods at LFA 94. The win earned Diaz a nominee for LFA Knockout of the Year in 2020. Then exactly one year later, he returned with another brutal knockout win. This time it came against former LFA title challenger Moses Murrietta. Now Diaz will have his own shot at the title and looks to win it in front of his home crowd at LFA 127.

Assis (12-5) is a three-sport black belt in Brazilian Jiu-Jitsu, Judo, and Karate that trains at American Top Team (ATT) in south Florida alongside former LFA middleweight champion Josh Silveira as well as LFA middleweight tournament participant Bruno Oliveira. That will give the submission ace a wealth of knowledge to pull from as he gets ready for his own LFA middleweight title fight. The Brazilian dynamo first made a name for himself in MMA when he headlined the second-ever Dana White’s Contender Series Brazil in the summer of 2018. Most recently, Assis won his LFA debut in December. The win came against the previously undefeated Jalin Hill in the co-main event of LFA 120. The Brazilian dominated the fight with his grappling prowess to solidify his case for a shot at the title. He will get that at LFA 127.

About COMMERCE CASINO:
The Commerce Casino & Hotel is LA’s #1 destination for games of skill. From hold ‘em and pai gow to blackjack and baccarat, we make great games better with our unsurpassed commitment to service. With the most tables of any card room in the country, there’s always a seat for players of all skill levels. The Commerce Casino complex includes a full-service 200-room hotel, which houses a day spa, beauty salon, pool and sundeck, banquet rooms, shops and entertainment. The Commerce is also home to several restaurants and plays host to live boxing, MMA and Professional Wrestling events. The Commerce Casino & Hotel is Where The Game Reigns. For more info visit: CommerceCasino.com.