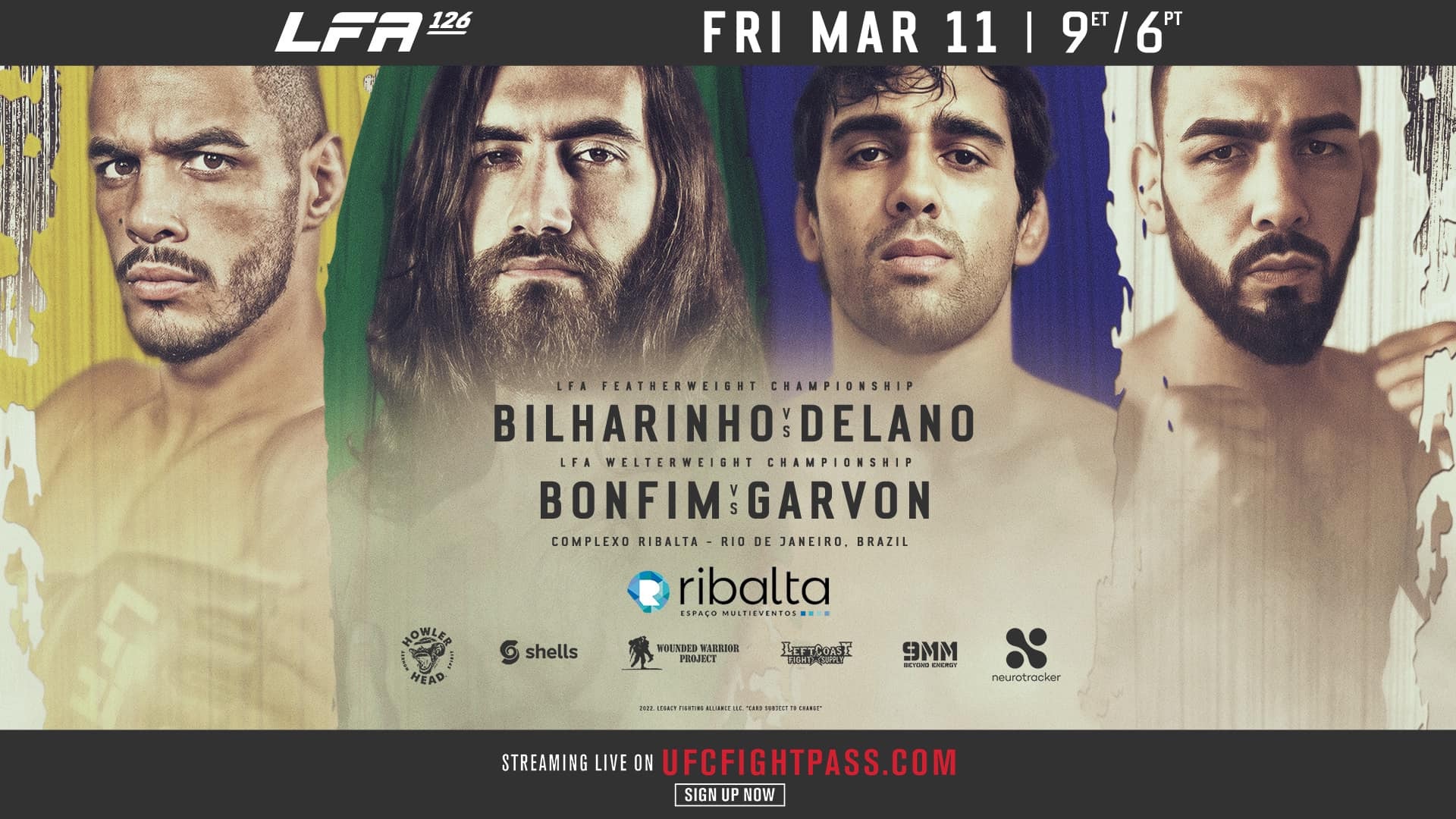 LAS VEGAS, Nevada — LFA CEO Ed Soares announced an update today for the promotion’s return to Brazil. LFA 126 on Friday will be topped with a championship doubleheader, but a change was made at the top of the card. The featherweight and welterweight titles will both be on the line after previous champions Bruno Souza and Carlos Leal signed with the UFC and PFL respectively. This will be the third LFA event to take place in Rio de Janeiro, Brazil after the promotion’s international expansion took place last summer.

“We had a late change at the top of LFA 126, but we are excited to still bring two title fights to Brazil on Friday,” stated Soares. “Jonas Bilharinho will now fight José Delano for the LFA featherweight title after Rafael Barbosa was forced to withdraw from the bout. Bilharinho is coming off a highlight reel knockout win on Dana White’s Contender Series, while Delano captured the Shooto Brasil featherweight title in his last fight. The winner will become the sixth featherweight champion in LFA history.”

Delano (9-2) was already busy training for this event as he was scheduled to fight top undefeated prospect Gabriel Braga to kick off the main card of LFA 126. However, when Barbosa withdrew from the title fight during Fight Week, Delano jumped at the opportunity to fight for the LFA featherweight title at the top of the card. Delano has a knack for capturing gold as we saw in his last fight against Luciano Benicio. Delano earned a Unanimous Decision victory over the BJJ black belt to win the Shooto Brasil featherweight title. Now the talented Brazilian Top Team (BTT) product, who is a protégé of former UFC champion and MMA legend Murilo Bustamante, looks to add his first world title to his growing trophy case when he faces Bilharinho at LFA 126.

The co-main event of LFA 126 will feature two of the top 170-pound prospects in Brazil as they vie to become the LFA’s seventh welterweight champion and third consecutive Brazilian to win the title. Bonfim defeated Brenner Alberth via TKO at LFA 112 in the third round of their semi-final bout in a fight that won LFA Fight of the Year. However, the punishment dished out between the two undefeated prospects prevented Bonfim from continuing in the tournament. He will now get his chance at LFA gold in the co-main event of LFA 126.

Garvon is a talented Muay Thai based fighter known as “Matrix” from Curitiba, which is a city synonymous with striking greatness. Garvon earned his shot at the title based on a body of work that now has him ranked as one of the top welterweights in South America. That includes a recent regional title victory against Ueliton Lopes in his home state of Paraná in southern Brazil. He secured the win with a vicious head kick that he followed with an onslaught of strikes on the ground that brought a stop to the fight via second round TKO.

About LFA:
LFA is a professional Mixed Martial Arts promotion that gives rising stars and top contenders the opportunity to prove their talent to fans and leaders in the industry. LFA was formed by the powerhouse merger between RFA and Legacy FC. LFA presents live Mixed Martial Arts events on a monthly basis around the United States including Las Vegas, Los Angeles, Denver, Dallas, and Houston. Based in Las Vegas, Nevada, LFA is one of the most active and respected MMA organizations in the fastest growing sport in the world. (The Octagon, Ultimate Fighting Championship®, UFC®, and the eight-sided competition mat and cage design are registered trademarks owned exclusively by Zuffa, LLC. All rights reserved).