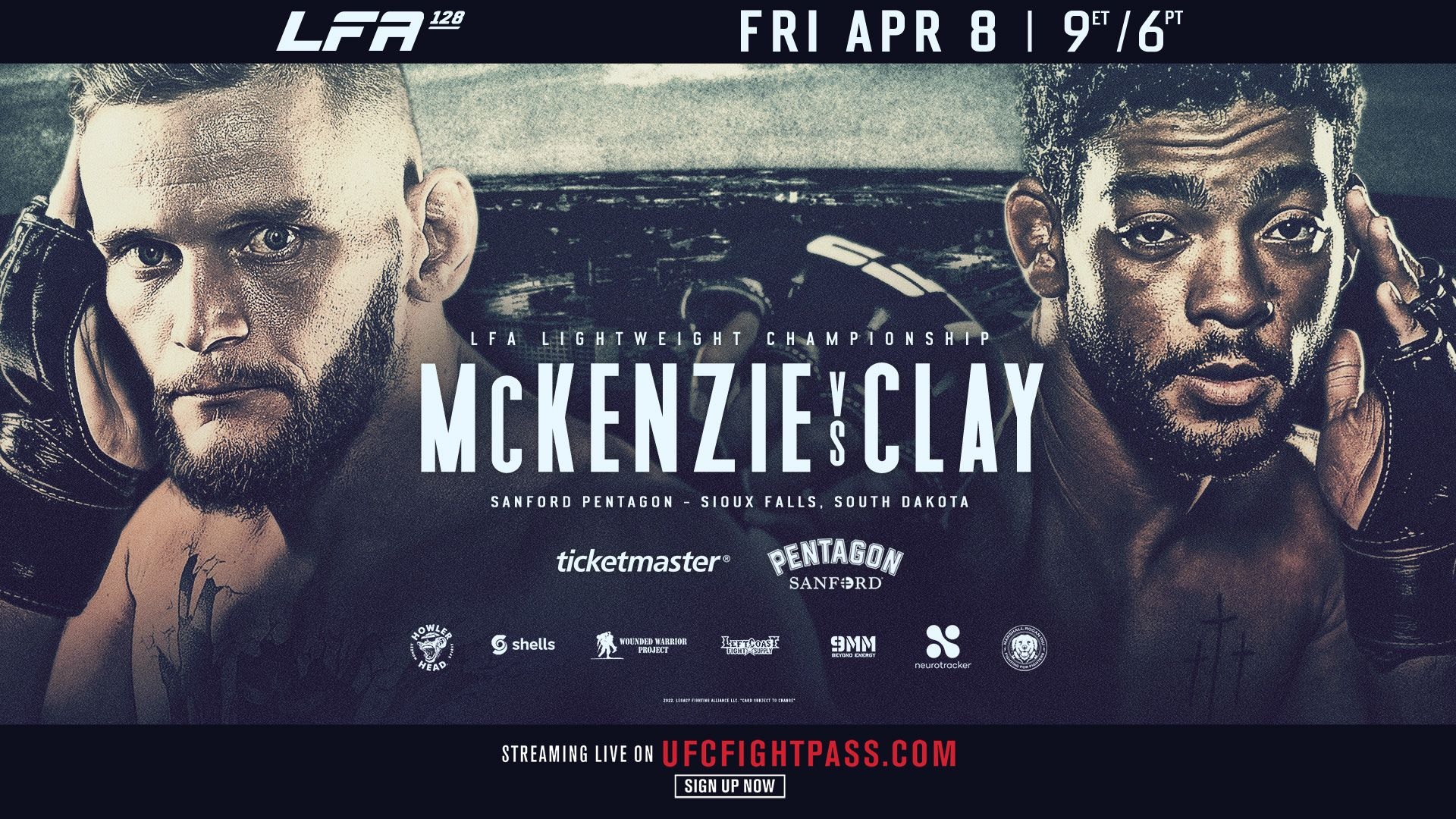 LFA brings the Lightweight Championship to South Dakota at LFA 128

LAS VEGAS, Nevada — LFA CEO Ed Soares announced today that the promotion will return to South Dakota in April. The main event of LFA 128 will feature a lightweight world title fight between two of the division’s most promising prospects.

LFA 128 will be the fifteenth LFA event to take place in the state, while the main event will crown the sixth 155-pound champion in LFA history. Two of the previous champions, Harvey Park and Bryce Logan, also won the title in South Dakota.

“We are excited to bring the LFA lightweight championship to South Dakota,” stated Soares. “Aaron McKenzie and Lucas Clay are two of the top lightweight prospects in the sport. McKenzie and Clay are both 3-0 in the LFA and will give the fans one of our most anticipated world title fights of 2022. The next chapter of our long-storied history at the Sanford Pentagon will be written at LFA 128.”

Tickets for LFA 128: McKenzie vs. Clay are available for purchase through Ticketmaster.com.

McKenzie (10-2-1) returns to the LFA Octagon after winning his first three fights for the promotion in impressive fashion. The Rafael Lovato Jr. protégé is known for his precision striking, grappling prowess, and all-around toughness. McKenzie gained valuable experience fighting for Legacy FC and Bellator early in his career, which has paid dividends for the scrappy Oklahoman as he has showcased all of his attributes since signing with the LFA. He has picked up wins over Brazilian powerhouse Gláucio Eliziário, The Ultimate Fighter 27 finalist Joe Giannetti, and Bellator veteran Brandon Phillips in that time. Now the surging 33-year-old returns to the building where he made his LFA debut to fight for the LFA lightweight title in the main event of LFA 128.

Clay (8-1) returns to the LFA Octagon fresh off of a career year, which ended with him extending his record with the promotion to 3-0 and receiving a nominee for the LFA Fans’ Choice Awards: Male Fighter of the Year. The proud Missouri native earned that honor by going unbeaten in the LFA with two dominant victories in 2021. The first win came against J.J. Okanovich, who was coming off of a win on Dana White’s Contender Series. The second win came against Jake Kozorosky via D’Arce Choke, which earned Clay a second nominee for the LFA Fans’ Choice Awards: Submission of the Year. Now the decorated 26-year-old, who is a relative of the legendary Cassius Clay (Muahammad Ali), looks to continue growing his own legend by capturing LFA gold.

LFA 128 will also feature the return of a pair of top undefeated prospects. 3x NCAA Division I All-American wrestler Bryce Meredith (1-0) is set to return to the bantamweight division after winning his MMA debut at the Sanford Pentagon last May. Also returning, is top Bosnian prospect Haris Talundžić (4-0). The talented welterweight returns to the LFA Octagon after going 3-0 for the promotion in 2021.