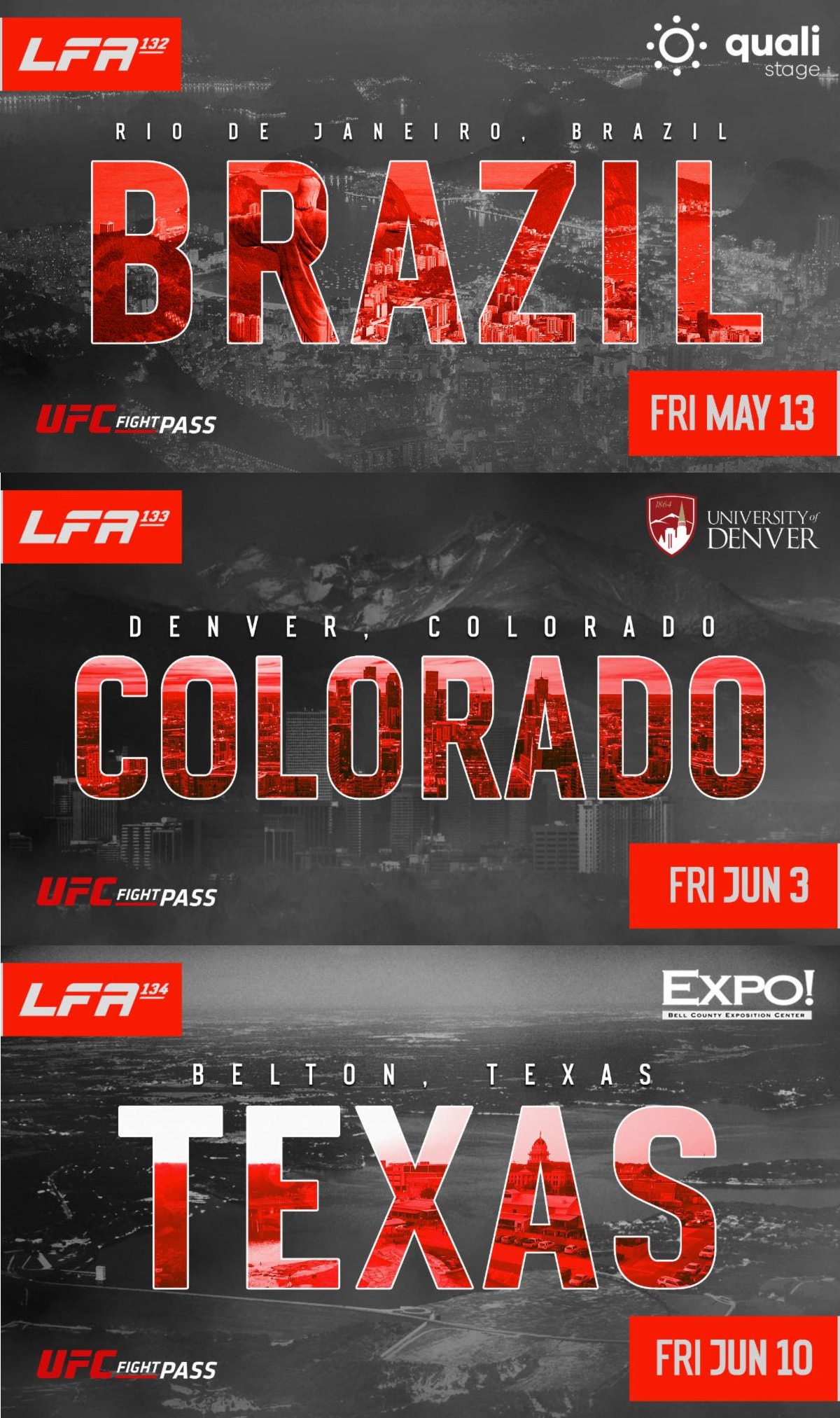 LFA announces return to Brazil in May, two U.S. events for June

LAS VEGAS, Nevada — LFA President Sven Bean announced today that the LFA has entered into event production agreements at a new venue in Brazil for May. The announcement also included agreements in two of the promotions top US based markets for June dates.

“I’m happy to announce that the LFA will will return Rio de Janeiro, Brazil to produce an event in May. We will then take a few weeks off, but return to two of our most successful markets for back to back events in June.” said Bean, who handles venue booking and scheduling for the LFA.

“In May we head back to Brazil debuting at a new venue, Qualistage, contracted through our local team in Rio de Janiero. I am always excited when we have the ability to bring our product to a concert or music venue. Qualistage has hosted some of South America’s biggest musical stars, but many international rock and pop acts as well. Showrooms like that always have such a great energy and I am looking forward to showcasing the LFA brand there on May 13th” stated Bean.

“We are excited for the LFA team to return to Brazil in May. We have secured the date at Qualistage, a beautiful venue in Barra da Tijuca. Everything is in place for a great night of action, and an amazing experience for the fans. Everyone from our invited VIP guests, to the casual fan will be presented with a night to remember!”

Tickets for LFA 132 will go on sale 10:00 AM RST, Friday April 15th at Qualistage.com.br and the Qualistage Box Office.

“After a short break, the LFA then returns to my home state of Colorado in June. We will set up shop on the University of Denver campus, inside the legendary Magness Arena. Home to the 9-time NCAA National Champion Denver Pioneers hockey team, this venue has also hosted multiple combat sporting events over the years including World Championship Boxing and Glory Championship Kickboxing. It’s been over 2 years since we’ve been able to bring the LFA back to my hometown and I can’t wait to show Denver what they have been missing,” Bean continued.

“We are excited to have LFA coming to the Magness Arena at the Daniel L. Ritchie Center for Sports & Wellness. It will be our first show with them but we already know the caliber of MMA bouts that they present. We expect an amazing night for all here at the Magness Arena.”

Tickets for LFA 133 will go on sale 10:00 AM MST, Friday, April 15th at DenverPioneers.com and the Denver University Box Office.

“The following week, we head south to the Lone Star state of Texas to work with our amazing venue partners at the Bell County Expo Center. This will mark our 5th trip to the iconic dome shaped venue in the heart of central Texas. What a great team to work with, and such a cool space to host an event. The local fans always show up ready to have a good time, and we will bring them a show to remember on June 10th,” Bean concluded.

“The Bell County Expo looks forward to having the LFA back in June for another event. Working with the LFA on the production of these events always leads to a very exciting and entertaining evening for the Central Texas area. We are pleased that the LFA considers us one of their top venues, and we are ready to get started in promoting another great, professionally produced, MMA sporting event,” added Tim Stephens, Bell County Expo Center Executive Director.

Tickets for LFA 134 will go on sale at 12:00 Noon, Friday, April 22nd at BellCountyExpo.com and the Bell County Expo Box Office.

LFA 134 will be broadcast live at 8PM CST/9PM EST on UFC FIGHT PASS.

About QUALISTAGE:
Metropolitan and its new partner Qualicorp , the most complete platform for choosing health plans in Brazil, present Qualistage. A show house that is a gift to cariocas and everyone who passes through Rio in search of fun. Visitors are able to enjoy music shows, the flagship of the house since its foundation, as well as theater, dance and e-sports events, as the multipurpose character is the strong point of our complex. The same stage, now in a new stage. The home of all shows is back. Rio deserves it. For more info visit Qualistage.com.br

About BELL COUNTY EXPO:
Whether you’re in search of great music, championship rodeos, or exciting motocross action, the Bell County Expo Center, home of the Central Texas State Fair, is truly the center of it all. … Just a short trip down I-35 from virtually anywhere in Texas will take you to Central Texas’ best entertainment arena. Please visit their website at bellcountyexpo.com for more information.