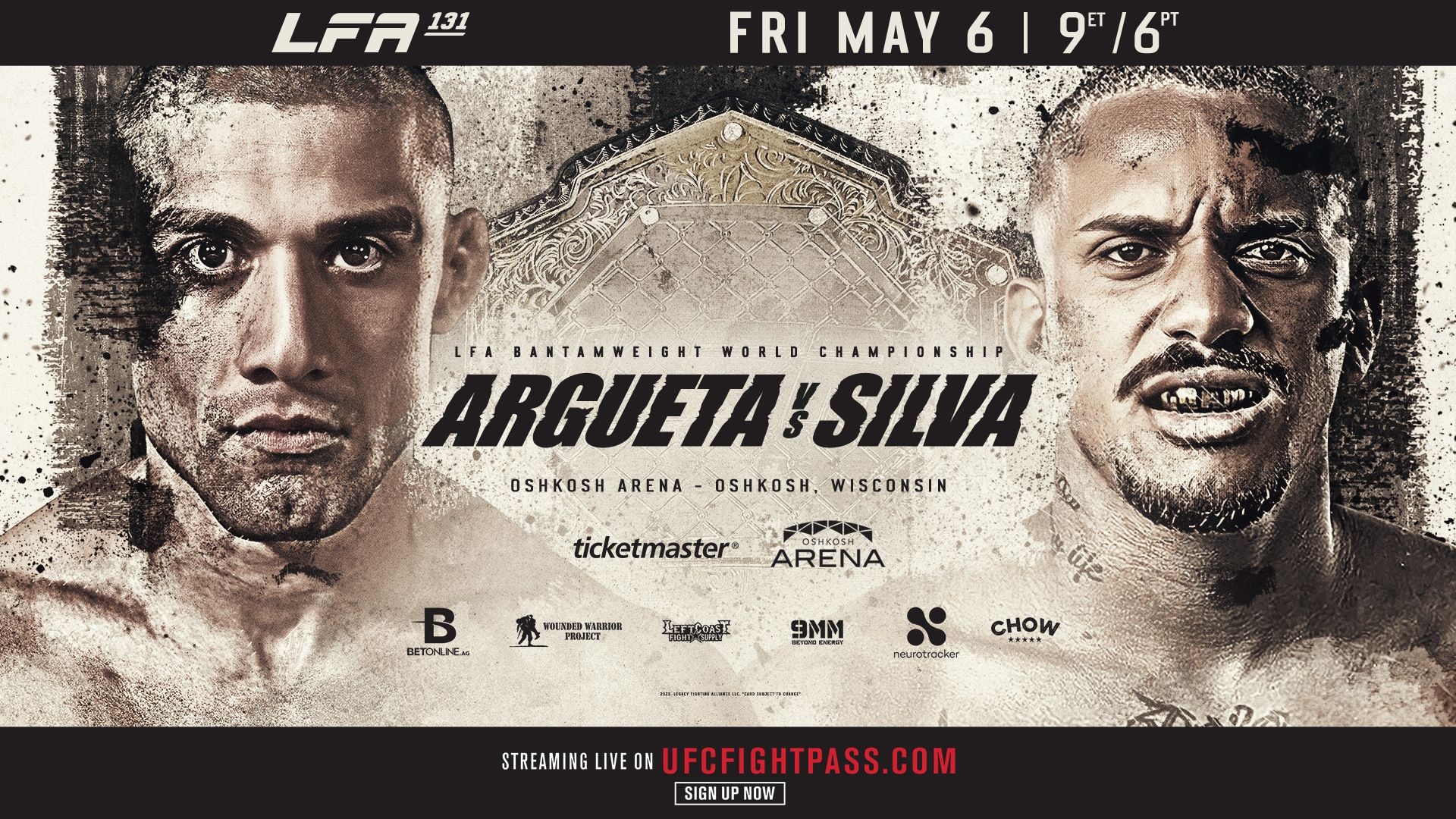 LFA brings the Bantamweight Championship to Wisconsin at LFA 131

LAS VEGAS, Nevada — LFA CEO Ed Soares announced today that the promotion will return to Wisconsin on Cinco de Mayo weekend. LFA 131 will feature a bantamweight world title fight when the promotion returns to America’s Dairyland. The winner will become the seventh 135-pound champion in LFA history. This will be the third LFA event to take place in the state of Wisconsin. RFA hosted one event in the “Badger State” before the merger of RFA and Legacy FC that created LFA.

Tickets for LFA 131: Argueta vs. Silva are on sale NOW at Ticketmaster.com.

“We are excited to bring the bantamweight championship to Wisconsin next month,” stated Soares. “Daniel Argueta is a top undefeated prospect in MMA and wrestled collegiately in Wisconsin. He will face Diego Silva, who is one of Brazil’s most decorated and promising 135-pound fighters. The winner will become the seventh bantamweight champion in LFA history. The previous six champions Leandro Higo, Ricky Simón, Miles Johns, Casey Kenney, Zviad Lazishvili, and Richard Palencia were all signed by the UFC and Bellator.”

Argueta (7-0) returns to Wisconsin, which is the state he credits as the place that “was an integral part of his journey to this exact moment of his life and everything after.” He competed for the UW-Parkside Rangers from 2012-2016 in the 149/157 pound weight classes. While at Parkside, he was a Team Captain and majored in Communications and Sociology. Argueta says it was because of his former teammates and coaches such as Nick Fishback, Joseph Her, Nick Becker, Craig Becker, Coach Jim Koch, and many others that he has been guided to be a champion in life. The dynamic Cub Swanson protégé has since won all seven of his MMA fights since turning pro. That includes four fights inside the LFA Octagon and a stint on the UFC’s hit reality show The Ultimate Fighter 29. “Dan The Determined” most recently earned a TKO win in the main event of LFA 123 against Mairon Santos, who entered the bout at 12-0. The Ranger standout will now return to the LFA Octagon close to his college stomping ground looking to continue his champion path by capturing the LFA bantamweight title.

Silva (14-6) is one of Brazil’s fastest rising bantamweight prospects. The decorated Brazilian, who is just six weeks younger than Argueta, began forging his combat skills in the red-hot pressure cooker of the Brazilian MMA scene. It is there where he earned black belts in both Jiu-Jitsu and Luta Livre, which are his country’s two most famous contributions to modern day MMA. He has since utilized his expertise in both martial arts to compile fourteen wins over the past decade. The man known as “Magrinho” has competed all over the world. His career began in Brazil, but has taken him to Portugal, Finland, Spain, Russia, the United Arab Emirates, and the United States. Silva has picked up plenty of hardware along the way, which includes a regional title fight in New England against six-fight UFC veteran Andre Soukhamthath. That win came six weeks ago and earned the Brazilian a multi-fight deal with the LFA and a shot at the LFA bantamweight title. That fight will come on one of the most iconic weekends in combat sports against America’s top bantamweight prospect.

LFA 131 will also feature the return of top women’s strawweight prospect Maria “Mouse” Henderson. She is the wife of former UFC lightweight champion Benson “Smooth” Henderson. Henderson will be returning to the LFA Octagon after winning her MMA debut at LFA 100 in 2021.

About OSHKOSH ARENA:
The Oshkosh Arena is Oshkosh’s premier concert and live engagement arena. Home to the Wisconsin Herd, Wisconsin GLO. Oshkosh Arena has welcomed over 200,000 attendees to its various events since opening in 2017. The arena boasts a multitude of spaces suitable for a range of celebratory events, concerts, private gatherings, and sporting tournaments! Stationed in the heart of Oshkosh, Wisconsin, The Oshkosh Arena is another feature to Wisconsin’s Event City with easy access to Oshkosh’s hotel and lodging facilities, the finest cuisine, and other local attractions! For more info visit OshkoshArena.com.