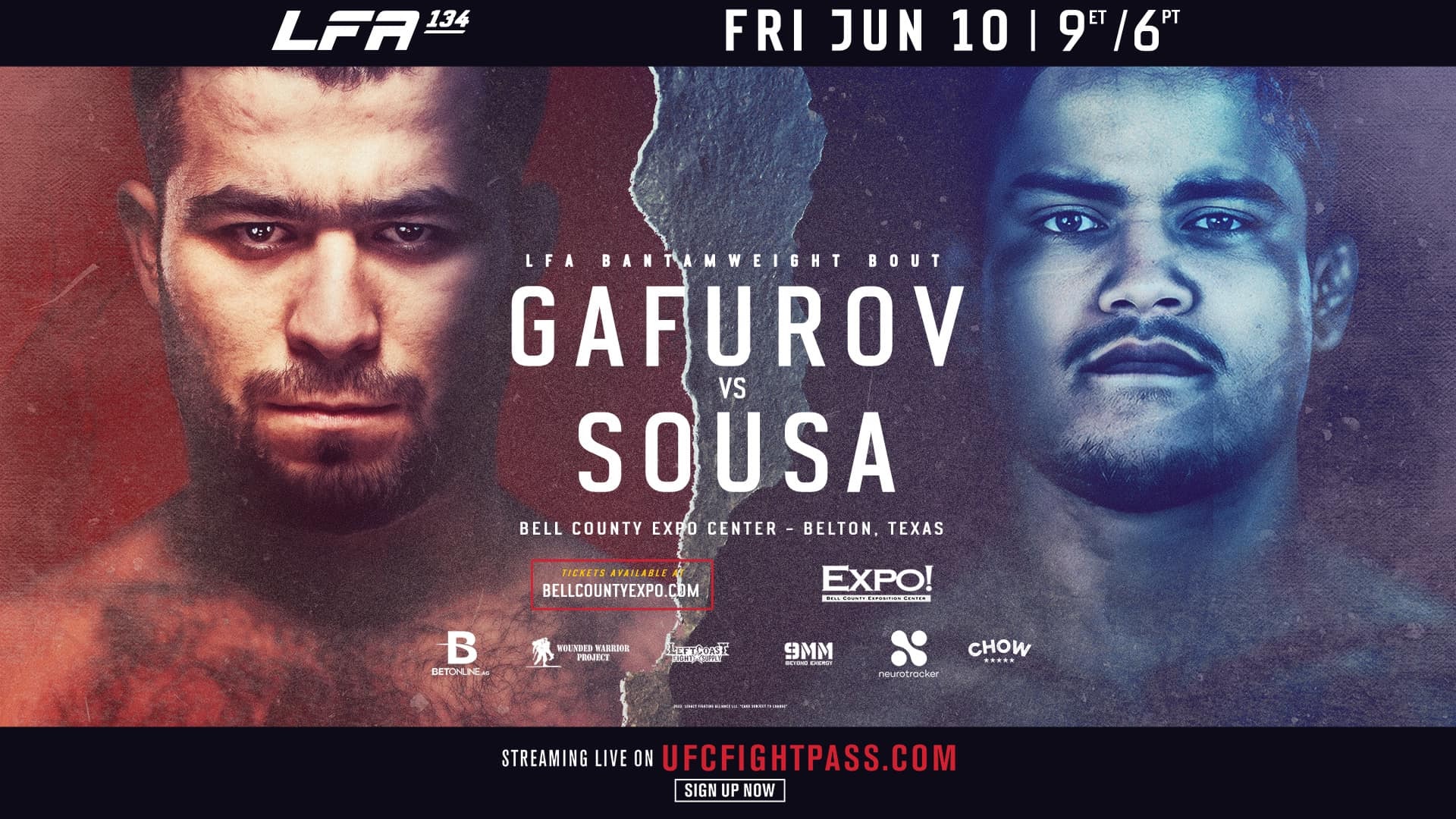 LFA returns to Texas with a Bantamweight Showdown at LFA 134

LAS VEGAS, Nevada — LFA CEO Ed Soares announced today that the promotion will return to Texas in June. LFA 134 will feature a bantamweight showdown at the top of the card when the promotion returns to the state of its inception. This will be the fifth LFA event to take place in the Centroplex of Texas. It will also be the twenty-second time that the LFA has visited “The Lone Star State”.

Tickets for LFA 134: Gafurov vs. Sousa are on sale NOW at BellCountyExpo.com.

“We are excited to bring a huge international clash to the Centroplex of Texas at LFA 134,” stated Soares. “Muin Gafurov is the top MMA prospect from Tajikistan and has competed all over the world. Herbeth Sousa is a BJJ black belt and one of Brazil’s most accomplished bantamweight prospects. This will only be the second time either man has competed in the United States and promises to give our passionate fight fans at the Bell County Expo Center a memorable showdown deep in the heart of Texas.”

Gafurov (17-4) comes to the LFA as a national hero in his home country of Tajikistan due to being one of its most decorated combat sports athletes. Tajikistan is a mountainous country located in Central Asia that loves combat sports. In fact, the country made gushtigiri its national sport, which is a form of traditional wrestling. Naturally, Gafurov gave up a promising soccer career after realizing he was even more gifted as a fighter. The 26-year old’s résumé includes two Combat Sambo World Championships, a FILA World Grappling Title, six bouts for Asia’s leading MMA promotion ONE, and an eight-and-a-half-year professional MMA career that has seen him compete in 11 countries. The last country he competed in happened to be his United States debut on Dana White’s Contender Series this past September. After coming up on the wrong end of a controversial Split Decision, “Tajik” will now become the first Tajik to fight for the LFA.

Sousa (15-1) will be making his LFA debut after gaining notoriety in another country with a deep appreciation for combat sports. In fact, he hails from Brazil’s capital city of Brasília and holds the rank of black belt in BJJ, which is his country’s most famous martial art. Beyond coming from a country filled with passionate fight fans, Sousa also shares other similarities with his Asian opponent. After winning various grappling matches in his country, the UNICEUB CUP (University Center of Brasília), and a regional title for Future FC, Sousa finally got the chance to make his international debut. That chance came in the form of a title fight in the United States, where he challenged the CFFC bantamweight champion Alexander Keshtov. Sousa dominated the undefeated Russian champion to earn a Unanimous Decision victory, but since he missed weight the day before, he was not eligible to take home the title. “Índio” will now use that experience at LFA 134.