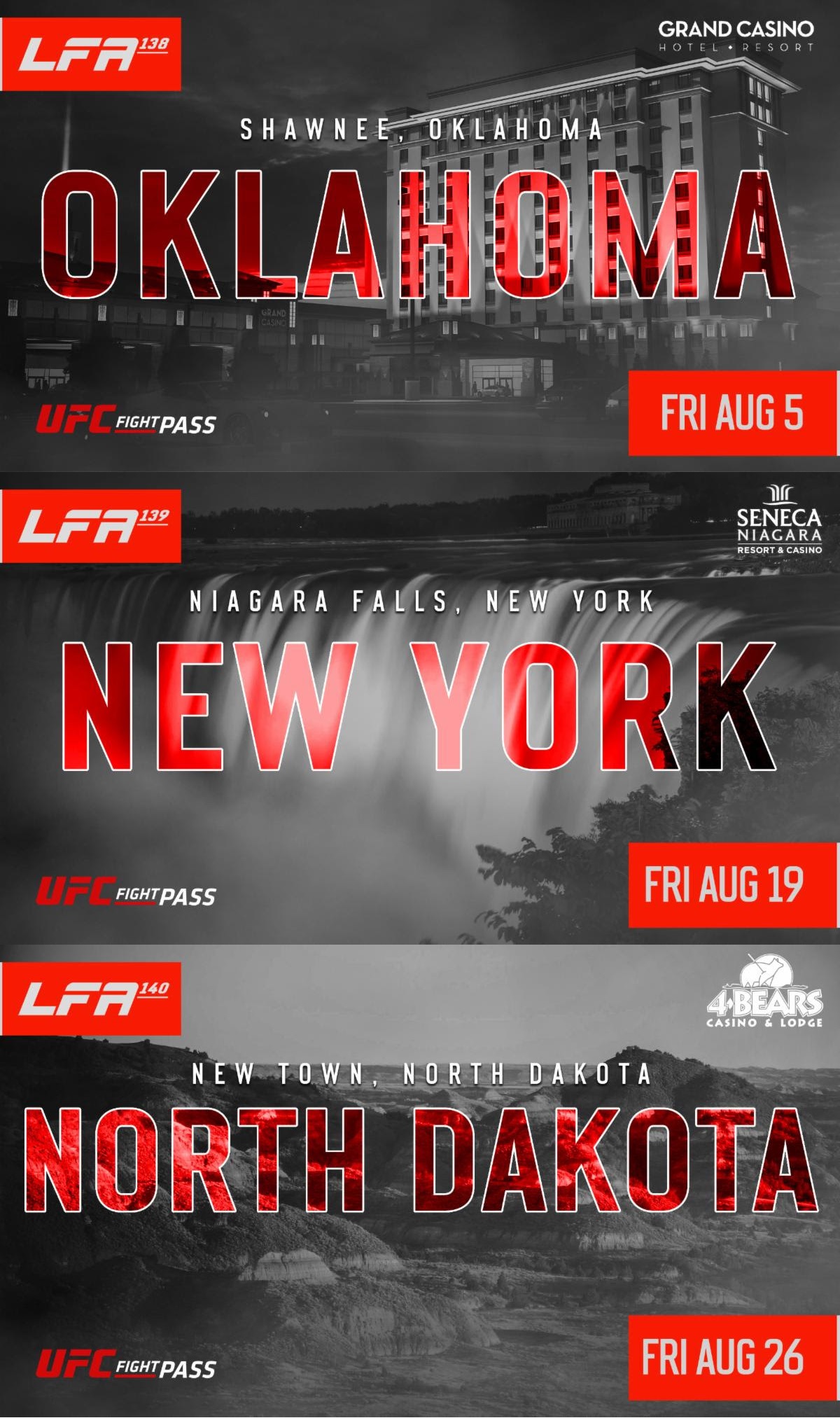 “The LFA team will be busy as we return for events in Oklahoma, New York and North Dakota all in the span of 3 weeks” said Bean, who handles venue booking and scheduling for the LFA.

“We will kick things off by heading back to the Grand Casino Hotel and Resort in Shawnee, Oklahoma on Friday August 5th” stated Bean.

“The Grand was a great partner to the LFA during the pandemic, allowing us to set up a residency inside the Grand Event Center. During the second quarter of last year, we were able to host 8 events. But those events were limited to very small groups of socially distanced casino guests. I am looking forward to a fully ticketed event and allowing the area fans back to have a true LFA experience!”

“The Grand Casino Hotel and Resort is very excited to have the opportunity to work with Legacy Fighting Alliance again. The LFA team have set the standard for mixed martial art events and we are excited to grow our relationship with them. It will be great to allow fans back for an exciting night of MMA on August 5th!”

LFA 138 will be broadcast live at 6PM PST/9PM EST on UFC FIGHT PASS.

“After a short 2 week break, the LFA then heads east for a return to Seneca Niagara Resort and Casino. The LFA had their inaugural event there this past February. It was an amazing show featuring some truly amazing fights, in a great venue packed with a sold out crowd. We set the bar pretty high that night. You couldn’t ask for a more accommodating and professional events team, and I look forward to working with them to raise the bar even higher on August 19th.” continued Bean.

“We’re thrilled to host another action packed night of Legacy Fighting Alliance MMA at Seneca Niagara Resort and Casino this summer! The last event this past February absolutely left our guests wanting more LFA and we’re very excited to have them back with some of the best up and coming MMA talent in the world on display!”

Tickets for LFA 139 are on sale NOW at Ticketmaster.com.

“The following week, we will head west for our second event at 4 Bears Casino and Lodge in New Town, North Dakota. We weren’t given any favors our first time there, with an ice storm threatening to cancel the event at any minute. Nevertheless, the LFA and 4 Bears teams pulled together and were able to produce one of the best events the region has ever seen. The 4 Bears Event center is state of the art, and great place to watch combat sports. The local fans have proven they show up ready to have a good time, and we have a great event in store for them on August 26th!” concluded Bean.

Tickets for LFA 140 will go on sale at 12:00 Noon, Wednesday July 20th at 4BearsCasino.com and at the 4 Bears Event Center Box Office.

LFA 140will be broadcast live at 6PM PST/9PM EST on UFC FIGHT PASS.

Look for LFA 138,139 and 140 Main Event, Co Main Event and Key Match Up announcements from LFA C.E.O. Ed Soares in the coming days.