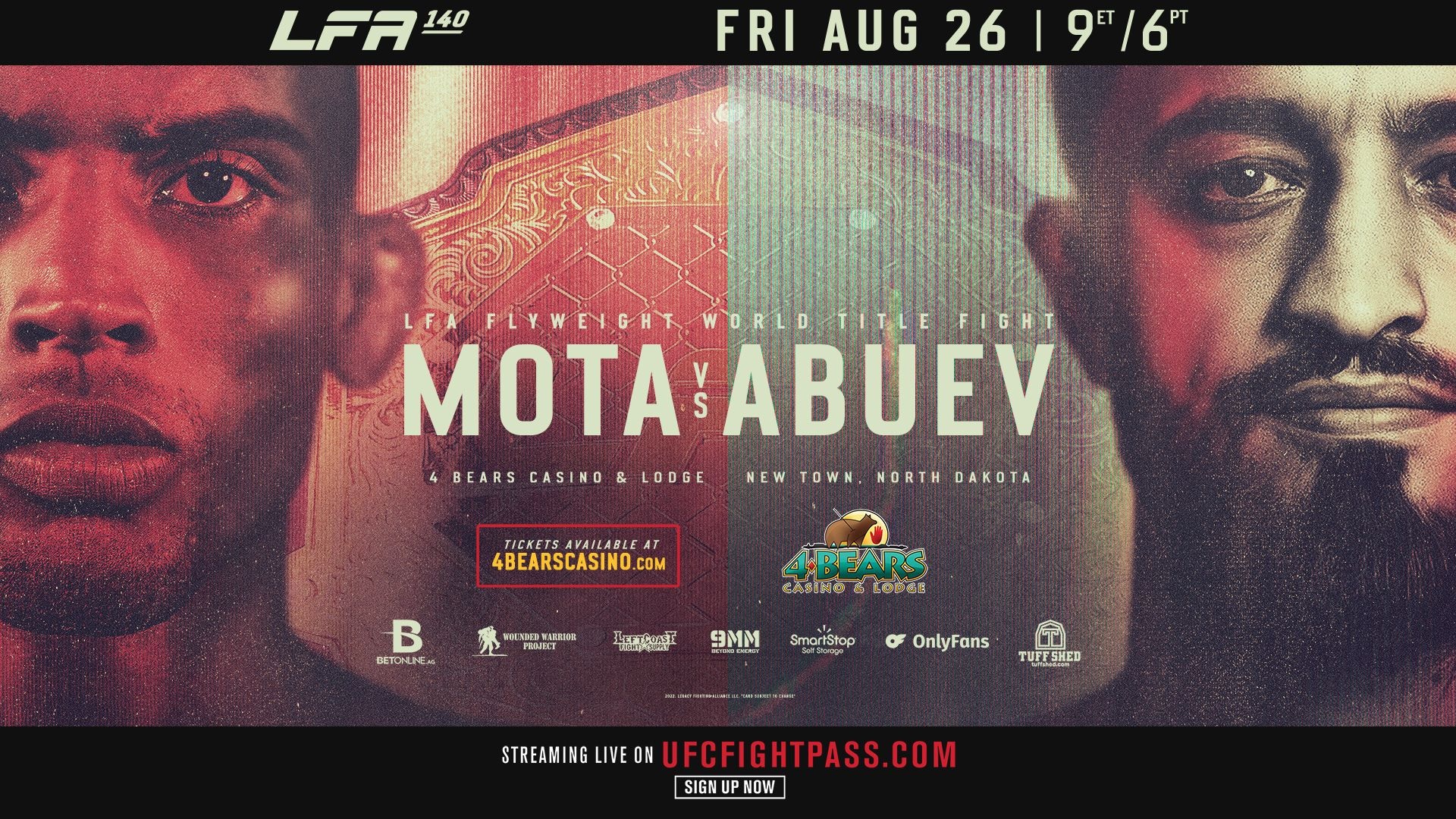 LFA brings the Flyweight Championship to North Dakota at LFA 140

LAS VEGAS, Nevada — LFA CEO Ed Soares announced details today about the promotion’s return to North Dakota. The main event of LFA 140 will feature a flyweight world title fight between top international prospects. The title became vacant after reigning champion Charles “Inner G” Johnson was signed by the UFC after becoming arguably the most dominant champion in LFA history. The LFA 140 headliner will crown the promotion’s ninth 125-pound champion in what will be the LFA’s second trip to the Peace Garden State.

“We are thrilled to bring the LFA Flyweight Championship to North Dakota,” stated Soares. “Brazil’s Carlos Mota and Russia’s Rizvan Abuev are two of the most exciting flyweight prospects in the world. Mota was the biggest threat to Charles Johnson’s title reign as they engaged in one of the best fights of 2022. Now that Johnson has signed with the UFC, Mota will get a shot at the vacant strap. He is one of only three men to win fights in the LFA on two continents, while Abuev is a five-time champion abroad and one of the most talented strikers in the division. The world will be watching when they meet for the flyweight title at LFA 140.”

Tickets for LFA 140: Mota vs. Abuev are available for purchase through 4BearsCasino.com.

Mota (7-1) is one of the most dynamic flyweight prospects hailing from the MMA hotbed of Brazil. The Brazilian dynamo burst onto the global MMA scene with a thrilling performance in his North American debut at LFA 79. The BJJ black belt made quick work of George Martinez that night by ending the fight with a body kick KO in just 36-seconds. The win earned him a shot at the title at LFA 100, but travel issues from Brazil prevented his scheduled title fight against Victor Altamirano. Mota then set his sights on fighting for LFA on home soil last summer where he defeated Jeferson Oliveira at LFA 112. That win earned him a title fight against the champion Charles Johnson at LFA 122. He fell short in a “Fight of the Year” candidate, but immediately bounced back by knocking out four-time LFA veteran Steven Merrill in May. Now the 27-year-old looks to become the first Brazilian to capture the LFA flyweight championship.

Abuev (12-3) is excited to make his long-awaited North American debut after winning five regional titles in his home country of Russia. The Saint Petersburg native will be looking to make a splash stateside after fighting almost exclusively in his home country of Russia with just one bout taking place in Turkey. Possessing some of the scintillating knockout power in the flyweight division, Abuev has finished his opponents in 11 of his 12 victories with 9 coming by way of KO or TKO. That includes 7 knockouts in the first round with the first coming in just 7 seconds. He will now look to unleash his ferocious kickboxing pedigree against his Brazilian opponent on neutral territory as he makes his debut on American soil. Just like Mota, the 30-year-old Russian, will also be looking to become the first fighter from his nation to win the LFA flyweight title. The previous eight champions are from the United States, Cuba, and Mexico.