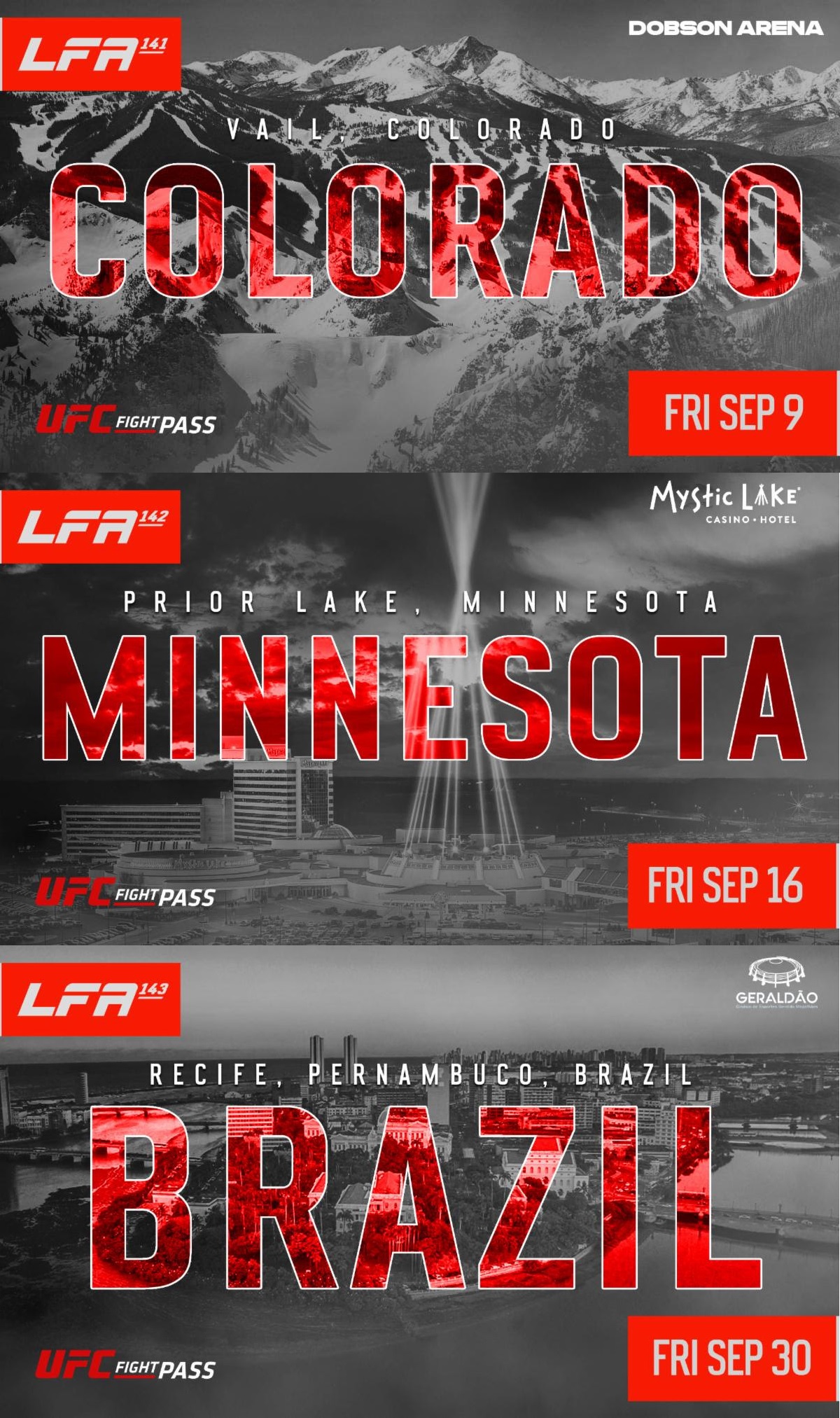 LAS VEGAS, Nevada — LFA President Sven Bean announced today that the LFA has entered into event production agreements for three events in the month of September.

“The LFA team will stay busy in September as we return to two of our favorite venues, and debut at a new venue and city in Brazil.” said Bean, who handles venue booking and scheduling for the LFA.
﻿

“We will kick things off by heading back to the Dobson Arena in Vail, Colorado on Friday September 9th” stated Bean.

“Growing up in Colorado, Vail is such a special place for me. It’s always had the International destination vibe, and has a long history of hosting world class sporting events. I am proud that we’ve been able to add the LFA series to that list. Each year we get better and better and I’m really excited for what we have in store for the fans this Septemeber”

“The Town of Vail has hosted the Legacy Fighting Alliance for a few years now and each year has left our team impressed with the production of the event. The event is a unique offering in our community and we look forward to welcoming them back on September 9th.”

Tickets for LFA 141 are on sale NOW at LFATIX.com.

“The following week, the LFA then heads northeast for a return to Mystic Lake Casino Hotel just outside of Minneapolis, Minnesota. The Mystic is truy one of my favorite properties we work with. The venue has an incredible entertainment team, and make every event something special. The LFA has had some fantastic events there, and I’m positive we will continue that tradition on September 16th.” continued Bean.

“The LFA events produced at Mystic Lake Casino have been amazing. The region is a real hot spot for talented young fighters. The LFA production and Mystic Lake showroom provides such a great platform to perform on. September 16th is stacking up to be one of the strongest events yet.”

Tickets for LFA 142 are on sale NOW at Ticketmaster.com.
LFA 142 will be broadcast live at 6PM PST/9PM EST on UFC FIGHT PASS.

“We will then close out September with another trip south to Brazil. The LFA will continue to expand our footprint by debuting at new venue in a new city. On Friday September 30th we will set up shop inside the Ginásio de Esportes Geraldo Magalhães, located in Recife, Pernambuco, Brazil. The LFA has had tremendous growth in Brazil over the last year, and I’m very grateful to our LFA Brazil team for doing all the heavy lifting. Each event gets better and better, and LFA 143 is looking to be the biggest event ever, not just in Brazil, but in the history of our promotion!” concluded Bean.

“I’m very excited to bring the LFA to the “Nordeste” or North East part of Brasil. The area has never seen an MMA event on this level. The “Geraldão” recently completed a complete renovation and LFA 143 will be the first International event to be broadcast from there. I’m excited to work with the team on another great chapter in LFA Brasil history!” added Raphael Feijao, Director of Brand Development, LFA Brasil.

Tickets for LFA 143 are on sale NOW at Bilheteriadigital.com.

LFA 143 will be broadcast live at 6PM PST/9PM EST on UFC FIGHT PASS.