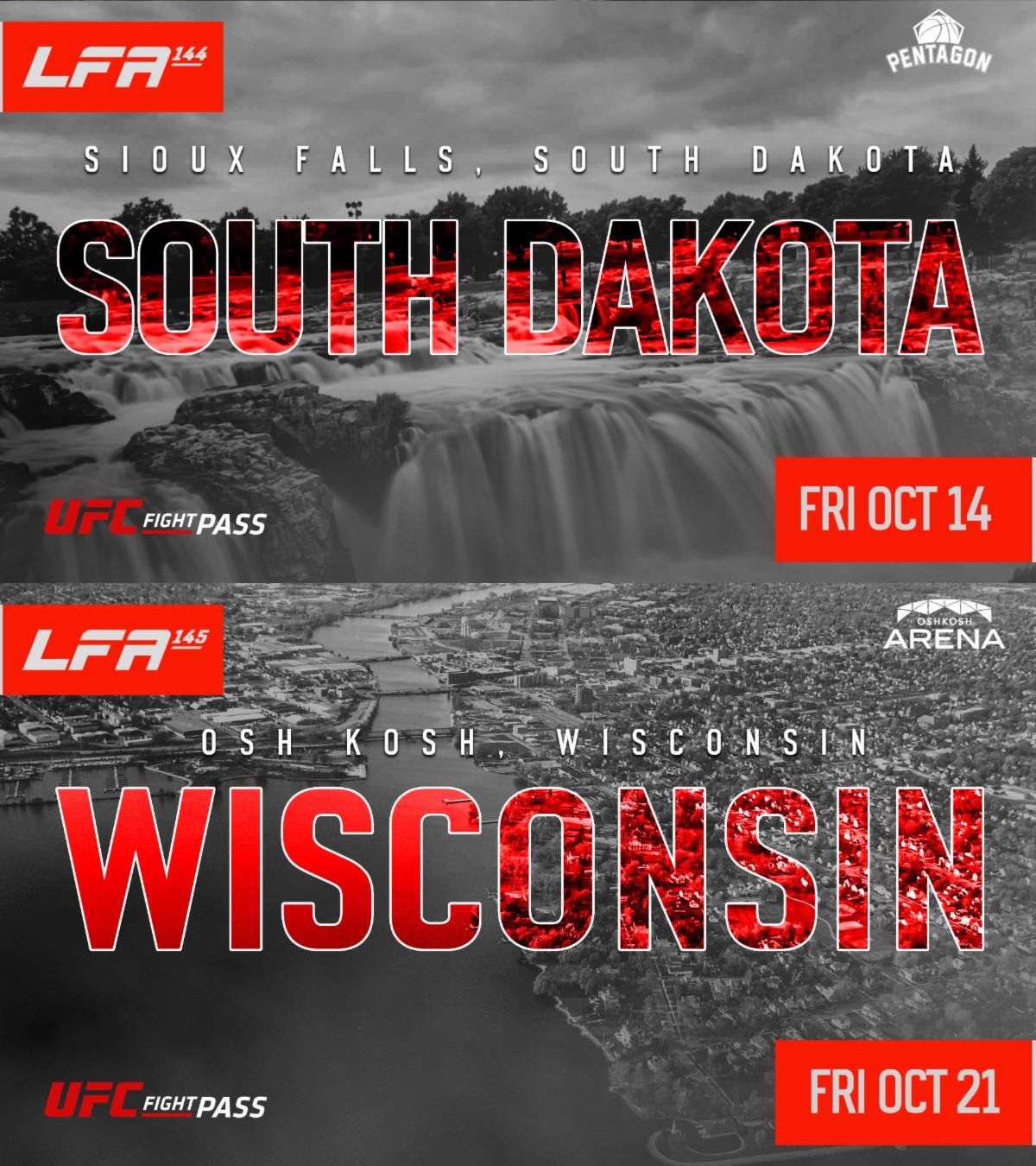 LAS VEGAS, Nevada — LFA President Sven Bean announced today that the LFA has entered into event production agreements for two events in the month of October.

“The LFA team will stay busy in October as we return to two of the best venues in the midwest” said Bean, who handles venue booking and scheduling for the LFA.

“We will kick things off by heading back to the Sanford Pentagon in Sioux Falls, South Dakota on Friday October 14th” stated Bean.

“In 2014 we debuted at in South Dakota and at the Pentagon when we were still the RFA. Now with 19 prior events there, we refer to Sioux Falls and the Sanford Pentagon as our home away from home. The bulding is such a great place to watch a fight. it has that Big Time Arena feel, but there is not a bad seat in the house. Their team always make it easy to produce event. I am looking forward to a milestone twentieth show, and another successful event on October 14th,” stated Bean.

“We always look forward to the LFA returning to the Pentagon. With the long history in the market the brand awareness is really strong. What seperates an LFA event from any other is our fans know they are watching the future stars of the sport. They can look back and say- I saw that guy right here in Sioux Falls at LFA! The LFA and Sanford teams work so well together, and always put forth a top-notch event. With it being show number twenty, we expect nothing less for October 14th.”

Tickets for LFA 144 are on sale NOW at Ticketmaster.com and the Sanford Pentagon Box Office.

LFA 144 will be broadcast live at 6PM PST/9PM EST on UFC FIGHT PASS.

“We will then head east two states over the following week, for a return to Oshkosh Arena in Oshkosh, Wisconsin. Another great venue in a great town. We have a multi-fight agreement in place with the venue, and really enjoy working with the in-house team. MMA resonates well in the Midwest, and Oshkosh is no different. I expect another solid show for the fans in attendance as well as those watching from around the globe,” continued Bean.

“We are excited to bring the LFA back to Oshkosh Arena for the second show this year. Once again, the feedback from customers has been great! The production, the fights, the atmosphere all come together to make it a can’t miss event for our building. With each event it gets better and better for eveyone involved. The local fanbase is in for a treat this October!”

LFA 145 will be broadcast live at 6PM PST/9PM EST on UFC FIGHT PASS.

Look for LFA 144 and 145 Main Event, Co Main Event and Key Match Up announcements from LFA C.E.O. Ed Soares in the coming days.