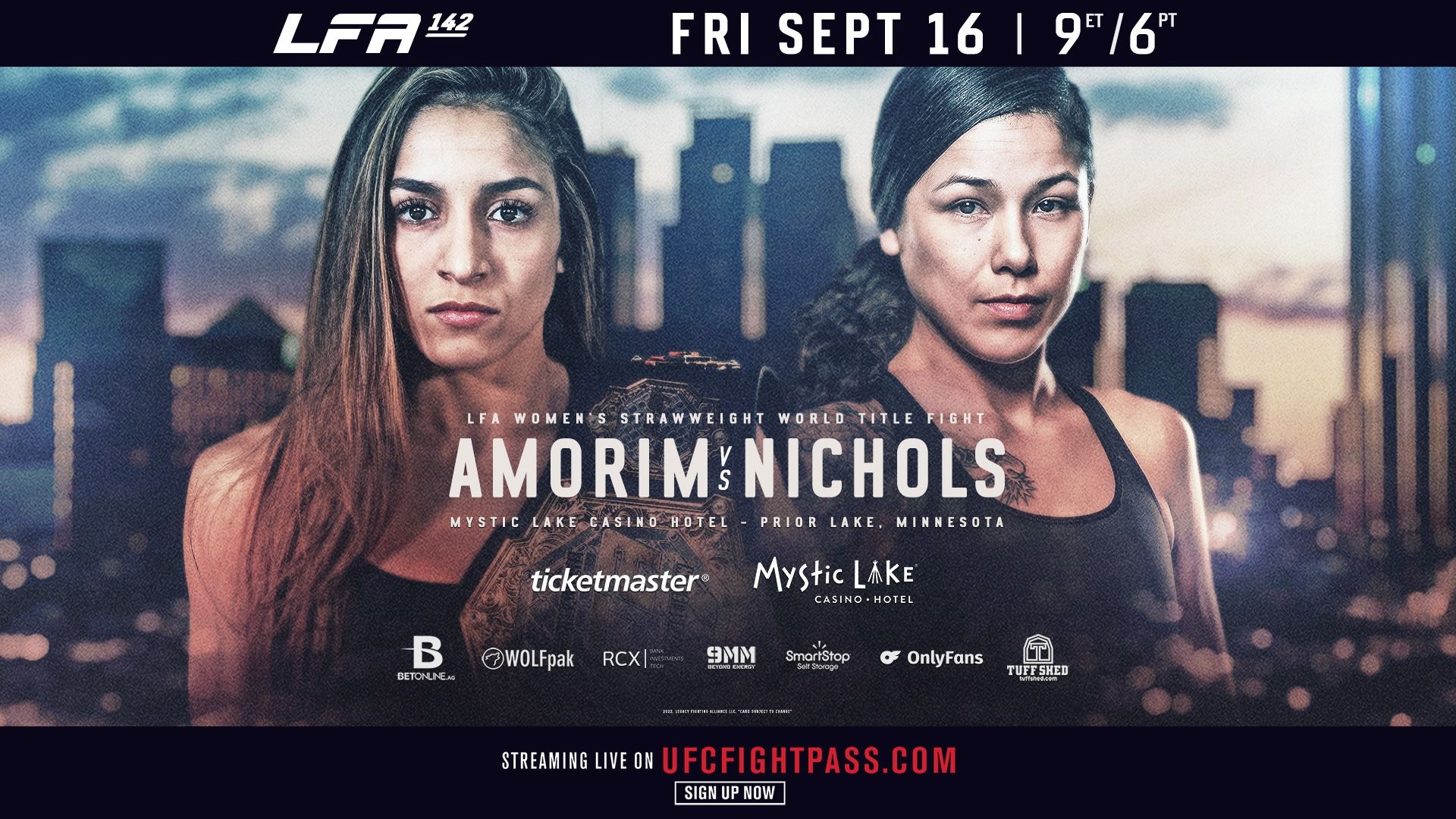 LAS VEGAS, Nevada —LFA CEO Ed Soares announced today that the promotion will return to Minnesota in September. The main event of LFA 142 will feature a women’s strawweight world title fight between the two of the promotions top female stars. LFA 142 will be the sixteenth LFA event to take place in the state, while the main event will feature the first-ever LFA strawweight title fight to be held in the Land of 10,000 Lakes.

“We are excited to bring the Women’s Strawweight Championship to Minnesota,” stated Soares. “Jaqueline Amorim is a world champion in BJJ and became the fourth strawweight champion in LFA history at LFA 125. She will defend her title against Ashley Nichols, who is a GLORY Kickboxing veteran from Canada that won impressively on the same card Amorim became champion in February. They are very familiar with each other, which makes their clash of styles at LFA 142 a title fight you do not want to miss.”

Tickets for LFA 142: Amorim vs. Nichols are available for purchase through Ticketmaster.com.

Amorim (5-0) is widely considered the most high-profile free agent signing of 2021. The multiple-time BJJ world champion was born into the world of combat sports in Manaus, the state capital of Amazonas in northwestern Brazil. At the age of 6, Amorim signed on to ASLE, one of the top jiu-jitsu academies in the world. This is the same academy where UFC star Ronaldo “Jacare” Souza and LFA star Ary Farias were developed prior to making the move to MMA. Amorim trained and competed extensively in Brazil and received her BJJ black belt shortly after her 20th birthday. One year later, she was invited by BJJ legend Leozinho Vieira to train, teach, and compete regularly on the IBJJF circuit in the United States. This allowed Amorim to sign with the LFA, where she set multiple records in her two fights with the promotion. Those LFA accolades include the fastest and third fastest finishes by a woman in LFA history for her 10-second knockout victory at LFA 110 and 33-second submission victory at LFA 101. These accomplishments earned her LFA Female Fighter of the Year honors and a shot at the vacant LFA women’s strawweight title in the promotion’s debut event in New York. Amorim, once again, wowed the crowd with her showstopping ability, when she submitted the incredibly dangerous Loveth Young with a kneebar to capture the title.

Nichols (4-3) is a multiple-time world champion and Canadian national champion in Muay Thai. The decorated striker decided to return to MMA earlier this year after taking a three-and-a-half-year break to study holistic nutrition. Nichols’ return to MMA could not have gone any smoother as she signed with LFA and defeated Dana White’s Contender Series alum Hilarie Rose on the same New York card that Amorim headlined and won the strawweight championship. The GLORY kickboxing veteran known as “AK-47” fought three bouts before Amorim and quickly made her way back cageside for the main event between Amorim and Young at LFA 125. The savvy veteran’s night was not over as she used the opportunity to study the two women with the hopes of facing the winner later in the year. That woman would be Amorim after she pulled off a spectacular fight-ending submission and Nichols now has her wish as she is set to challenge Amorim for the title. Nichols also happens to be a proud member of the Chippewas of the Thames, First Nation Community and represents the Chippewa, Oneida, Potawatomi Nation. This means the location of the title fight will be even more meaningful for her since it takes place at the Mystic Lake Casino Hotel, which is owned by the Shakopee Mdewakanton Sioux Community and sits on sovereign indigenous land.