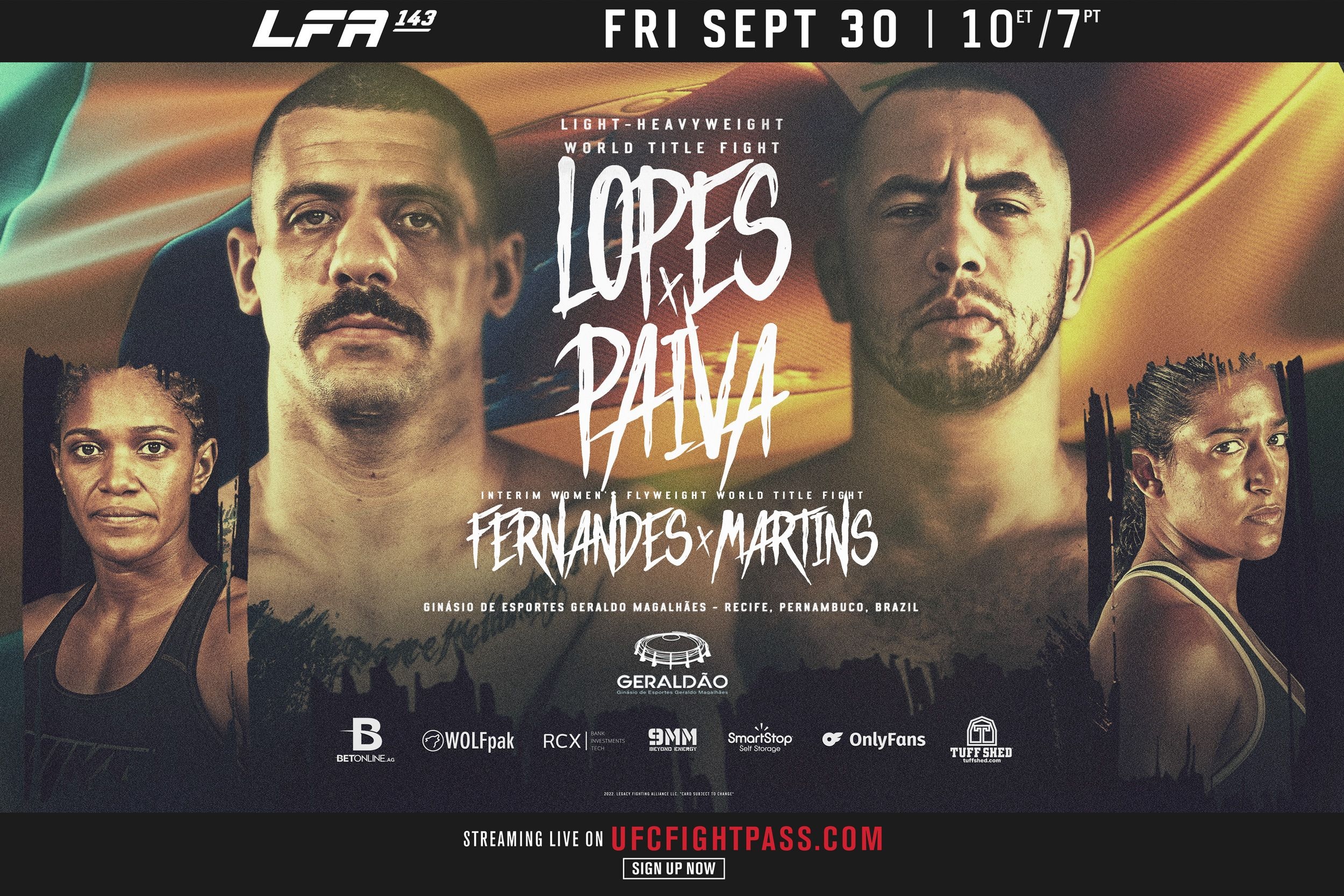 LAS VEGAS, Nevada — LFA CEO Ed Soares announced today that the promotion will make its first trip to northeastern Brazil at the end of September. LFA 143 will feature a championship doubleheader at an event that is expected to have a sold-out crowd of nearly 10,000 people. The two titles on the line are the light-heavyweight title and interim women’s flyweight title. This will be the sixth LFA event to take place in Brazil after the promotion’s international expansion began in the summer of 2021.

“We are excited to bring two title fights to northeastern Brazil at LFA 143,” stated Soares. “After hosting five successful events in southeastern Brazil, we will now travel northeast to Recife, which is the capital city of Pernambuco. The main event will crown the sixth light-heavyweight champion in LFA history, when top undefeated prospect Bruno Lopes faces fan favorite Willyanedson Paiva. Then in the co-main event, top female prospects Gabriella Fernandes and Karoline Martins will fight for the interim women’s flyweight title as our reigning champion Jamey-Lyn Horth heals from an injury.”

Lopes (10-0) is a dynamic 29-year-old prospect from the Brazilian municipality of Cotia, which is located just west of Brazil’s most populated city of São Paulo in the state of São Paulo. He proudly represents both the China Team and Thiago Miranda Team located in his home state and picked up a win for the state of São Paulo in his LFA debut in July. He did this by submitting Mailton Azevedo during the Rio de Janeiro vs. São Paulo team challenge at LFA 136. The submission came in the first round via Arm-Triangle Choke, which brought his record to a perfect 10-0. Now the Brazilian regional champion is looking to add more gold to his trophy case as he fights for the vacant LFA light-heavyweight title at LFA 143.

Paiva (8-4-1) recently celebrated his 24th birthday by signing with the LFA. The icing on his birthday cake was the fact that he will be fighting for the vacant LFA light-heavyweight title in his home state of Pernambuco at LFA 143. Paiva hails from the municipality of Toritama, which is located in Pernambuco about 100 miles west of Recife. Toritama is the smallest municipality in Pernambuco, but its name comes from the indigenous words tori (“stone”) and tama (“region”). This describes Paiva’s fighting style to a tee as the stone-cold finisher has stopped his opponents in all 8 of his wins. The proud Pernambucano is a member of the Aprígio Neto Team in Toritama, which is led by BJJ black belt Aprígio Neto.

The co-main event of LFA 143 will feature an interim women’s flyweight title fight between two of Brazil’s top female prospects as Gabriella Fernandes (7-1) and Karolina Martins (9-4) vie to become the LFA’s fourth women’s flyweight champion. This opportunity became available to both women as current LFA women’s flyweight champion Jamey Lyn-Horth continues to heal from an injury. The undefeated Canadian champion is expected to fight the winner of Fernandes vs. Martines in a title unification bout later this year. The flyweight championship has the longest history in the LFA women’s divisions as it was the first title awarded. This happened when current UFC star Andrea Lee captured the title all the way back at LFA 4.

About GINÁSIO DE ESPORTES GERALDO MAGALHÃES:
Ginásio de Esportes Geraldo Magalhães, also known as the Geraldão, is an indoor sporting arena located in Recife, Brazil. The capacity of the arena is 15,000 spectators and opened in 1970. Ginásio de Esportes Geraldo Magalhães is a high standard multipurpose arena, capable of hosting multi-sport events and concerts. Geraldão is part of a collection of sports venues designed by the architect Ícaro de Castro Melo, which also includes the Nilson Nelson gymnasiums, in Brasília; Paulo Sarasate, in Fortaleza; and Ibirapuera, in São Paulo. Please visit their Official Website for more information.