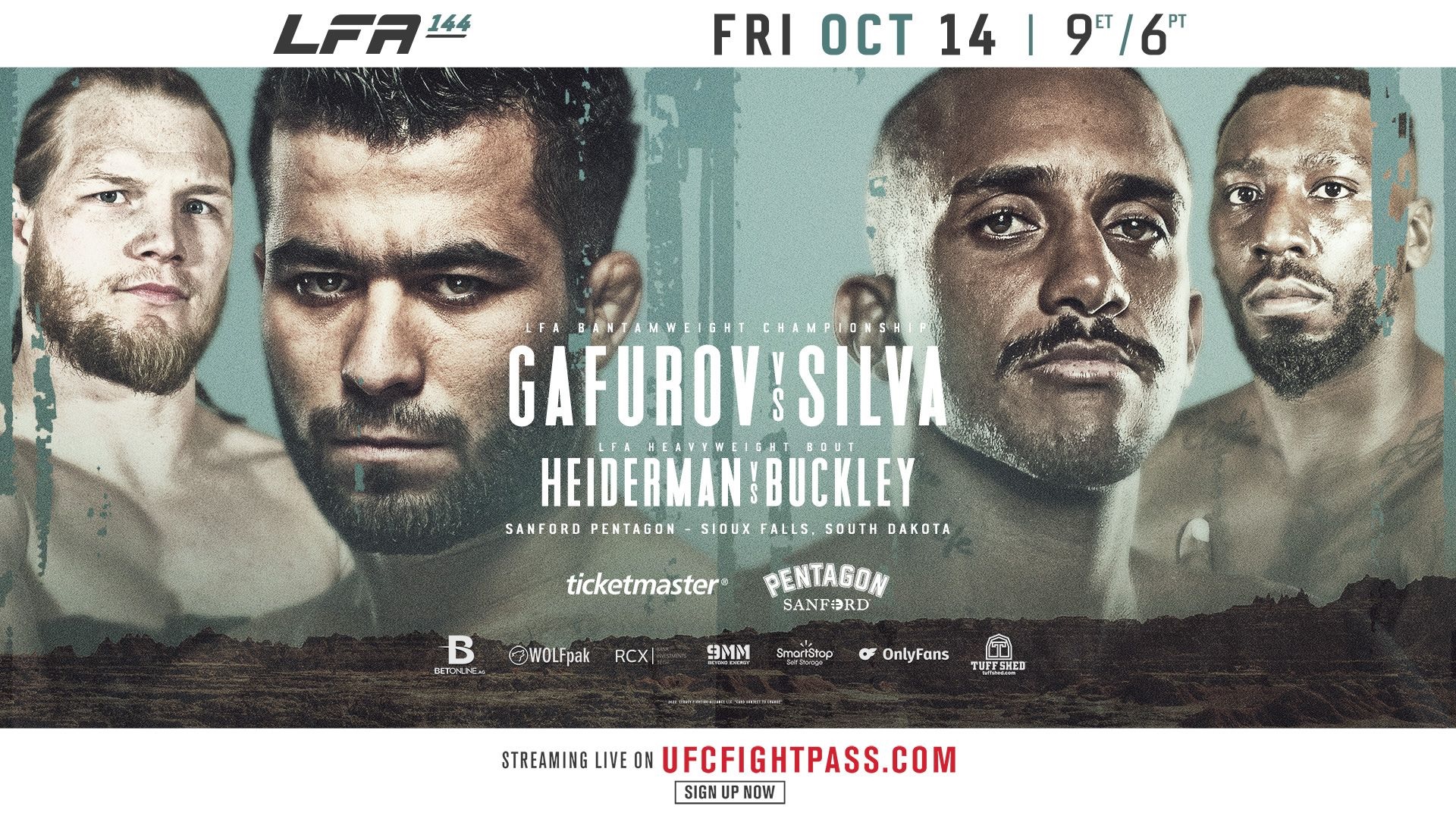 LFA brings the Bantamweight Championship to South Dakota at LFA 144

LAS VEGAS, Nevada — LFA CEO Ed Soares announced today that the promotion will return to South Dakota in October. The main event of LFA 144 will feature a bantamweight world title fight between two of the division’s most exciting prospects. LFA 144 will be the sixteenth LFA event to take place in the state, while the main event will crown the eighth 135-pound champion in LFA history.

“We are excited to bring the LFA bantamweight championship to South Dakota,” stated Soares. “Muin Gafurov and Diego Silva are two of the most talented and exciting prospects in the sport. Gafurov is coming off a huge knockout win in his LFA debut in June, while Silva just picked up a big win in August after dropping a narrow Split Decision in his first shot at the title in May. The bantamweight championship is the oldest title in LFA history and we can’t wait to crown our next champion at the Sanford Pentagon at LFA 144.”

Tickets for LFA 144: Gafurov vs. Silva are available for purchase through Ticketmaster.com.

Gafurov (17-4) signed with the LFA as a national hero in his home country of Tajikistan due to being one of its most decorated combat sports athletes. Tajikistan is a mountainous country located in Central Asia that loves combat sports. In fact, the country made gushtigiri its national sport, which is a form of traditional wrestling. Naturally, Gafurov gave up a promising soccer career after realizing he was even more gifted as a fighter. The 26-year old’s résumé includes two Combat Sambo World Championships, a FILA World Grappling Title, six bouts for Asia’s leading MMA promotion ONE, and a nine-year professional MMA career that has seen him compete in 11 countries. The Dana White’s Contender Series alum announced his arrival in the LFA with a devastating knockout of Herbeth Sousa at LFA 134 and now looks to do what his teammate Zviad Lazishvili accomplished by winning the LFA bantamweight title at the Sanford Pentagon.

Silva (15-7) also signed with the LFA this past spring, coming to the promotion as one of Brazil’s fastest rising bantamweight prospects. The decorated Brazilian began forging his combat skills in the red-hot pressure cooker of the Brazilian MMA scene. It is there where he earned black belts in both Jiu-Jitsu and Luta Livre, which are his country’s two most famous contributions to modern day MMA. The 28-year-old has utilized his expertise in both martial arts to earn fifteen wins over the past decade. The man known as “Magrinho” has competed all over the world. His career began in Brazil, but has taken him to Portugal, Finland, Spain, Russia, the United Arab Emirates, and the United States. Silva picked up plenty of hardware along the way, which earned him a shot at the title in May. He dropped a Split Decision to Dan Argueta (who was then immediately signed by the UFC), but quickly rebounded with a win over Askar Askar at LFA 138.