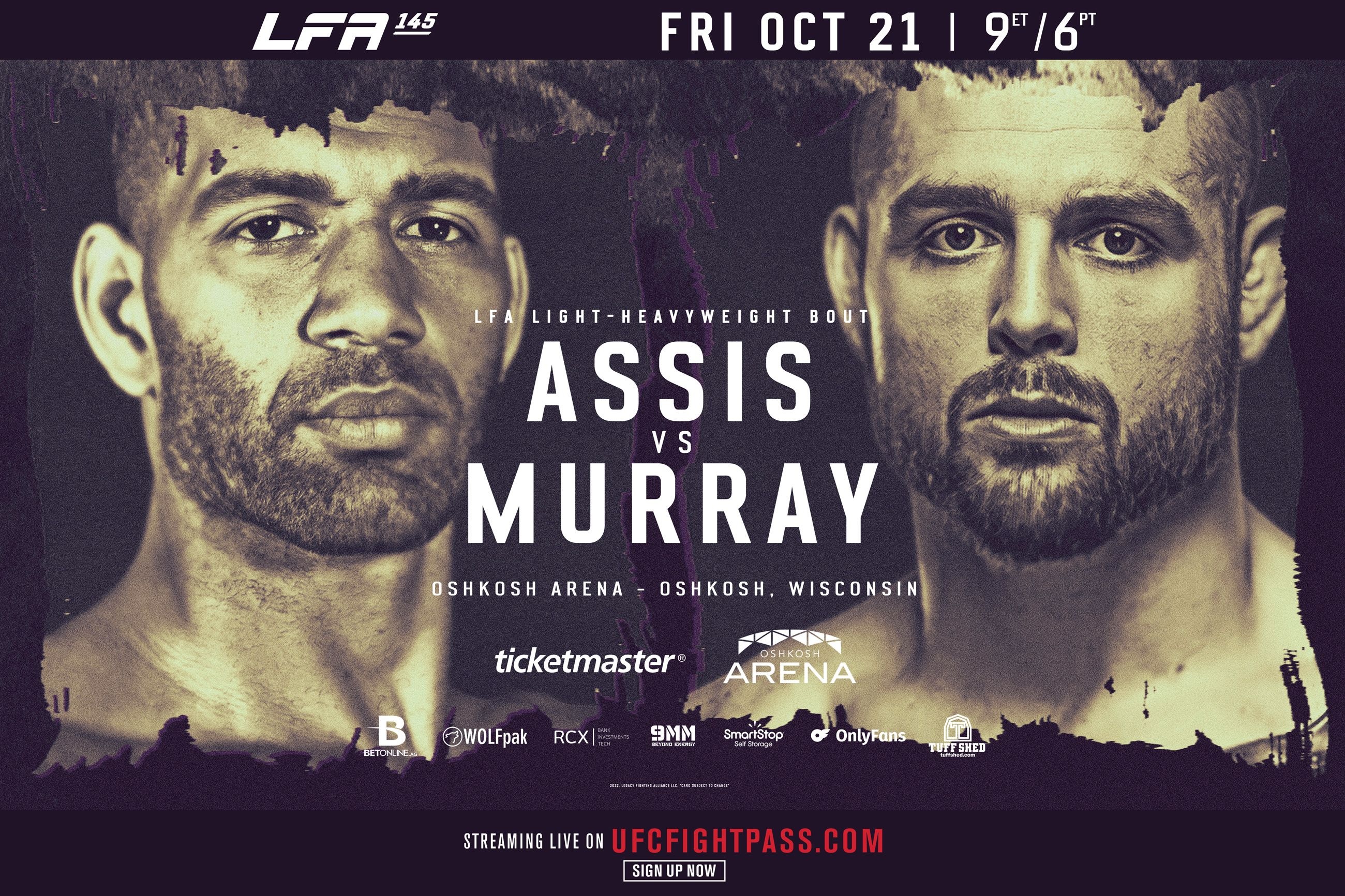 LFA brings a Light-Heavyweight Showdown to Wisconsin at LFA 145

LAS VEGAS, Nevada — LFA CEO Ed Soares announced today that the promotion will return to Wisconsin next month. LFA 145 will feature an explosive light-heavyweight showdown when the promotion returns to America’s Dairyland. This will be the fourth LFA event to take place in the state of Wisconsin. RFA also hosted one event in the “Badger State” before the merger of RFA and Legacy FC that created LFA.

Tickets for LFA 145: Assis vs. Murray are on sale NOW at Ticketmaster.com.

“We are excited to bring the LFA back to Wisconsin next month,” stated Soares. “Bruno Assis is one of the most decorated grapplers competing in MMA, while Jesse Murray is the top light-heavyweight prospect in the Midwest. They both have experience competing on Dana White’s Contender Series and know exactly what is at stake when they meet in the main event of LFA 145. This is an intercontinental showdown you don’t want to miss!”

Assis (12-6) returns to the LFA Octagon looking to make a big statement in a bigger body after coming up short in his attempt to capture the LFA middleweight title this past March. Now at light-heavyweight, the three-sport black belt in Jiu-Jitsu, Judo, and Karate has been putting his full attention into training instead of cutting weight. The Brazilian trains at American Top Team (ATT) in south Florida alongside former LFA two-division champion Josh Silveira. That will give the submission ace great insight during his transition between the middleweight and light-heavyweight divisions. The 30-year-old first made a name for himself in MMA when he headlined the second-ever Dana White’s Contender Series Brazil in the summer of 2018. Now he is looking to make an even bigger name for himself as he begins his run in the light-heavyweight division. That run will begin when he returns to headline LFA 145.

Murray (9-4) will be making his highly anticipated LFA debut after earning a well-deserved reputation as the most dominant light-heavyweight force to come out of “The Buckeye State” in several years. The 29-year-old has won four of his past five fights, which includes a pair of wins over LFA standouts Tim Hiley and Alton Cunningham. The win over Hiley, who is a former LFA title challenger, caught the attention of both the LFA and UFC matchmakers. Murray was quickly signed and given a title shot against Silveira in a bout that was set to headline LFA 110 in July 2021, but an injury forced him out of the bout. Once he was fully recovered, he was then contacted by UFC matchmakers to compete on Season 5 of Dana White’s Contender Series. Murray did not earn a UFC contract that night, but quickly got back to his winning ways with a win over Cunningham this past June. Now he is ready for his long-awaited LFA debut at LFA 145.

About OSHKOSH ARENA:
The Oshkosh Arena is Oshkosh’s premier concert and live engagement arena. Home to the Wisconsin Herd, Wisconsin GLO. Oshkosh Arena has welcomed over 200,000 attendees to its various events since opening in 2017. The arena boasts a multitude of spaces suitable for a range of celebratory events, concerts, private gatherings, and sporting tournaments! Stationed in the heart of Oshkosh, Wisconsin, The Oshkosh Arena is another feature to Wisconsin’s Event City with easy access to Oshkosh’s hotel and lodging facilities, the finest cuisine, and other local attractions! For more info visit OshkoshArena.com.