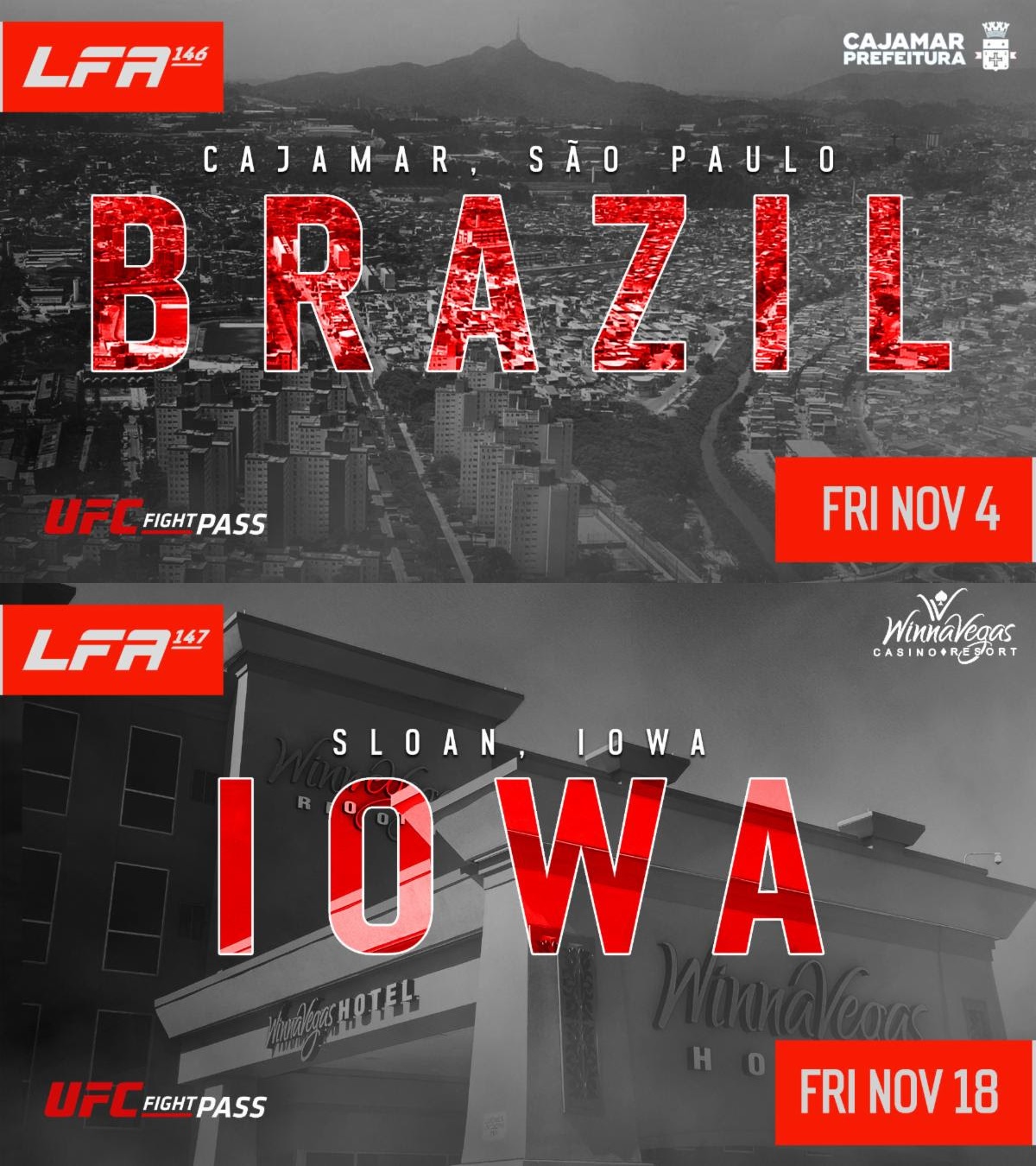 LFA announces November schedule of events in Brazil and Iowa

LAS VEGAS, Nevada — LFA President Sven Bean announced today that the LFA has entered into event production agreements for two events in the month of November.

“After two amazing events in October, The LFA team will keep the momentum going into November as we debut at venues in Brazil and Iowa” said Bean, who handles venue booking and scheduling for the LFA.

“We will kick things off by making our promotional debut at the Ginásio do Polvilho in Cajamar, São Paulo, Brazil, on November 4th”, stated Bean.

“This will be our final event in Brazil for 2022. The venue just finished a complete renovation and looks to be the perfect building to host an LFA event. We are lucky to have such a tremendous LFA Brazil team in place. They always make it such a smooth and professional experience, and each event gets better and better. I am looking forward to the inaugural show in the venue, and another successful international event on November 4th,” stated Bean.

“We are looking forward to the LFA debut in Cajamar, and the renovated Ginásio do Polvilho. We are working together with the mayor Danilo Joan to create a night to remember for the local community. He has been extremely proactive and instrumental in the process. We will also continue our tradition of giving back to the community at LFA 146. We will be accepting donations of food in exchange for tickets to the event. The food will then be distributed to underprivileged families in the area.”

LFA 146 will be broadcast live at 6PM PST/9PM EST on UFC FIGHT PASS.

“We will then return to the state Iowa for the first time since 2019, where we will be making our debut at WinnaVegas Casino Resort. I recently made a trip to the property, and the venue is truly a ‘not a bad seat in the house’ type space. I’m looking forward to working with their in-house events team and establishing the LFA footprint in the area.” continued Bean.

“WinnaVegas Casino Resort and the Winnebago Tribe of Nebraska is excited to bring MMA fighting back to Siouxland! We are beyond excited to partner with Legacy Fighting Alliance on Friday, November 18. We look forward to showing our beautiful casino resort to the world live streaming the fight on UFC Pass!”

Tickets for LFA 147 are on sale NOW, available at TIX.com and the WinnaVegas Box Office.

LFA 147 will be broadcast live at 6PM PST/9PM EST on UFC FIGHT PASS.

About GINÁSIO DO POLVILHO:
The Municipality of Cajamar, through the Department of Public Works and Services, coordinated the complete renovation of the entire structure. of the Polvilho Gym. Maintenance and repairs were carried out in the entire infrastructure of the gym with new coverage, increase in the dimensions of the court, painting, accessibility to bathrooms, access ramp, installation of a new electronic scoreboard, new hydraulic basketball tables, renovation and installation of LED lighting in the entire indoor and outdoor area of ​​the gym. The restructuring of the space will provide significant improvements for the court to host the numerous competitions held throughout the year and also for the sports projects in various modalities that the City Hall offers free of charge to the population. For more info visit the Cajamar official website.