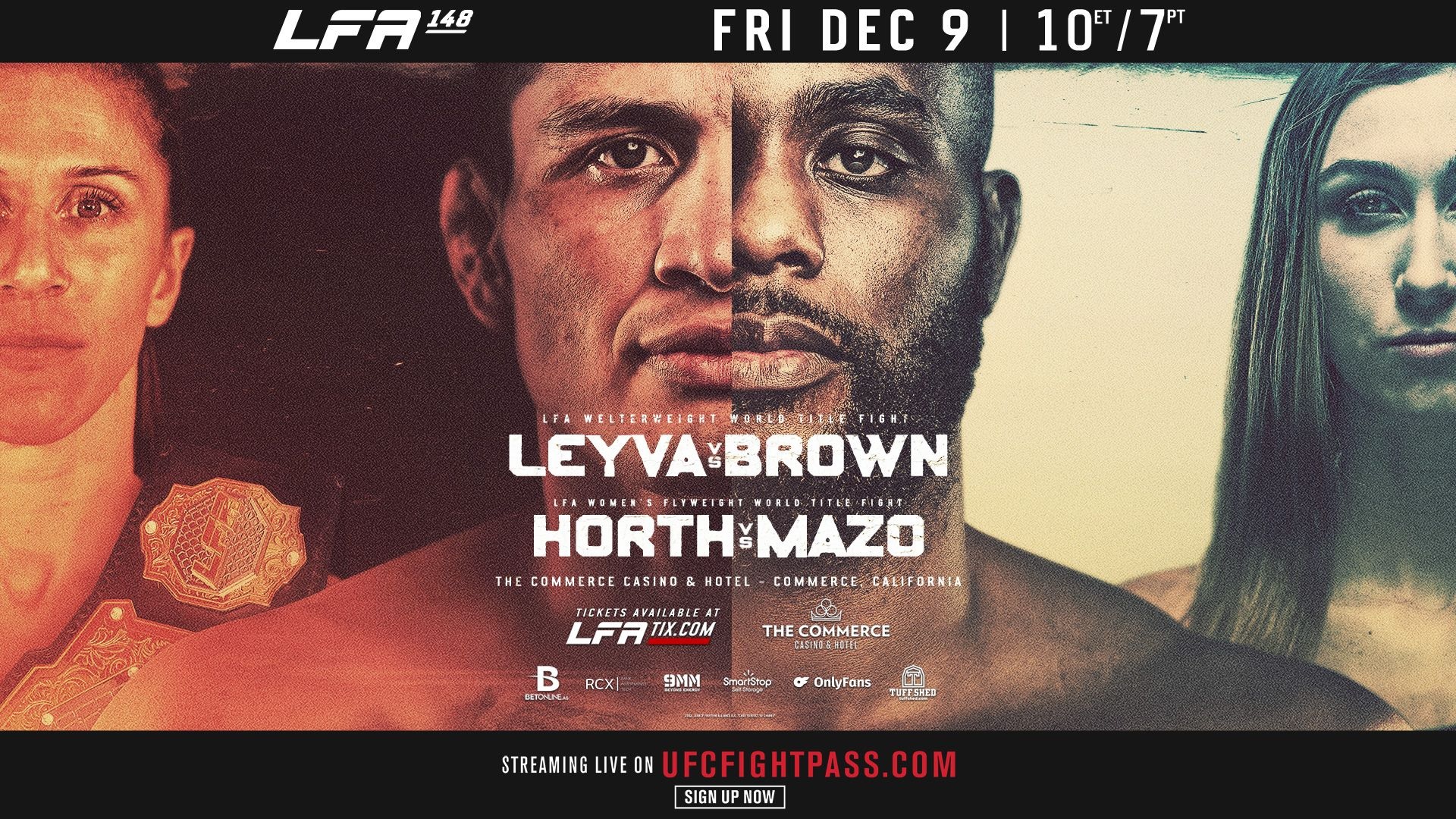 LAS VEGAS, Nevada — LFA CEO Ed Soares announced today that the promotion will return to southern California in December for its 28th and final event of 2022. LFA 148 will feature a championship doubleheader in what will be one of the promotion’s most stacked and exciting events of the year. LFA 148 will be the fourteenth LFA event to take place in the Golden State.

“We are excited to cap off an incredible 2022 by bringing two title fights to my home state of California at LFA 148,” stated Soares. “The main event will see two-time Olympic wrestler Alfonso Leyva face knockout artist Chris Brown for the LFA welterweight title. They are both coming off impressive wins in LFA headliners and now look to add LFA gold to their lengthy résumés. Then in the co-main event, undefeated LFA women’s flyweight champion Jamey-Hyn Horth returns to face former LFA women’s flyweight champion Sabina Mazo in the first LFA title fight between current and former champions.”

Tickets for LFA 148: Leyva vs. Brown are available for purchase through LFATIX.com.

Leyva (6-0) returns to action after dominating in his highly anticipated LFA debut this past July in the main event of LFA 135. The man known as “Sniper” signed with the promotion with a lot of hype surrounding him due to being the first Olympian from Mexico to sign with the LFA. In fact, Leyva is a two-time Olympian, having competed for Mexico in Greco-Roman wrestling at the 2016 Summer Olympics in Rio de Janeiro, Brazil and the 2020 Summer Olympics in Tokyo, Japan. He is also a ten-time Mexican national champion and the 2019 Pan-American Games silver medalist. Leyva transitioned to MMA after competing in the 2020 Olympics and never looked back. He has since earned six victories via KO or TKO with none of his opponents making it out of the second round. Now the native of Guadalajara, Jalisco, Mexico has his sights set on winning LFA gold at LFA 148.

Brown (9-4) has been destined for greatness since making his LFA debut in the summer of 2019. The flashy and creative prospect was only four fights into his MMA career, when he traveled across the country to compete at LFA 71 in Atlanta, Georgia. He made the most of that opportunity by dispatching local standout Yemi Oduwole. Brown showed off his dynamic striking prowess by landing a devastating head kick followed by ground n’ pound to pick up his first LFA win. However, Brown really found his stride last year when he picked up a pair of dominant wins in the LFA. Now the LFA Fans’ Choice Awards: Male Fighter of the Year (2021) nominee looks to continue that momentum after handing Haris Talundžić his first loss in the main event of LFA 141. “Breezy The Future” is now set to fight for the LFA welterweight title after winning five fights for the promotion.

The co-main event of LFA 148 will feature a women’s flyweight title fight in what will be the first LFA title fight between current and former champions.

Horth (5-0) won the title in the main event of LFA 120 against BJJ expert Mayra Cantuária in what was the final LFA fight of 2021. What made the win even more impressive is that the undefeated Canadian prospect, known for her striking, did this by submission with one leg severely compromised. After the Brazilian damaged Horth’s right knee midway through the opening round with a deep Heel Hook, Horth fought through the pain and eventually took her opponent’s back to end the fight with a Rear Naked Choke in Round 3. Horth would later explain, “I heard it snap. The pain was so bad, I remember telling myself to tap mentally, but physically my body wouldn’t tap.” Horth has now spent the past year rehabilitating her knee and is ready to defend her title one year after winning it.

Mazo (9-4) is looking to re-write the LFA history books, once again, when she returns to the promotion that she grew up in. Mazo became the first Colombian fighter in LFA history when she signed with the promotion at age 19. She then quickly gained worldwide attention three weeks after her 20th birthday with one of the most watched Head Kick knockouts in Women’s MMA. 5 months later, the “Colombian Queen” would strike again by recording a second consecutive viral Head Kick knockout. Mazo would then become the youngest champion in LFA history by defeating Shannon Sinn at LFA 37, just one month after her 21st birthday. She would defend her title once before singing with the UFC, where she has fought the past 3 years. Now after a year of changing gyms and improving her all-around game, she will look to become the first person to win an LFA title twice, while also tying the record for most women’s wins in LFA history (5).