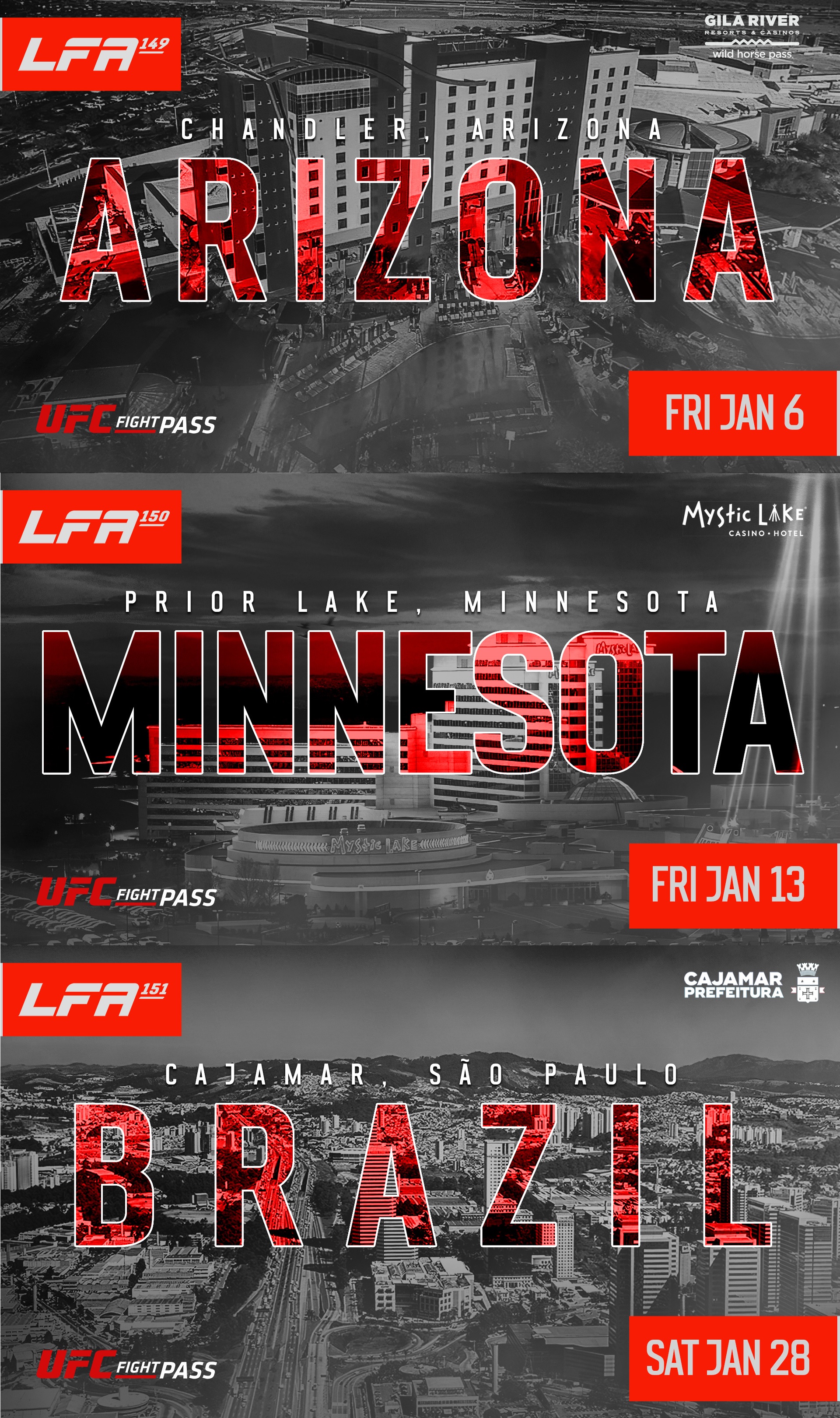 LAS VEGAS, Nevada — LFA President Sven Bean announced today that the LFA has entered into event production agreements for three events in the month of January 2023.

“Coming off a successful 2022, the LFA team will stay busy in January as we debut at a new venue in Arizona, return to one of our most popular midwest venues, and finish the month with a trip to Brazil.” said Bean, who handles venue booking and scheduling for the LFA.

“We will kick things off with a special engagement and debut at Gila River Resorts & Casinos Wild Horse Pass Casino, in Chandler, Arizona on Friday, January 6th,” stated Bean.

“This event will be a departure from our standard M.O. as we bring the Octagon to the stage inside The Showroom at Wild Horse Pass. It will be an intimate setting with every seat being right on top of the action. The venue, casino, and hotel are all world class and will bring an upscale quality to the show. The property is the nicest casino resort in the Phoenix area, and It will serve as the perfect host to start off our 2023 season.”

“We are so delighted to welcome the LFA to The Showroom at Wildhorse Pass. The LFA team have shown they bring a level of showmanship and professionalism that partners perfectly with our portfolio of events. We are thrilled to be able to offer such an exciting and dynamic event to kick off the new year!”

Tickets for LFA 149 go onsale Friday December 2nd at 10:00 AM MTN through Ticketmaster.com.

“The following week, the LFA heads to the Midwest for a return to Mystic Lake Casino Hotel just outside of Minneapolis, Minnesota. The venue has such a professional entertainment team, and make every event so smooth. By far, one of my favorite venues to work with. We have a rich history of events there, and I’m proud to say this will be the first of three events in 2023 at Mystic Lake Casino,” continued Bean.

“The LFA have produced some amazing events at Mystic Lake Casino over the years. The LFA production and the Mystic Lake showroom provide a great platform for the region’s top young athletes. I’m looking forward to working with the LFA and Mystic teams on three great events in 2023.”

Look for Ticket information for LFA 150 in the coming weeks.

LFA 150 will be broadcast live at 6PM PST/9PM EST on UFC FIGHT PASS.

“We will then close out January with another trip south to Brazil. We will return to the Ginásio do Polvilho in Cajamar, São Paulo, Brazil, on January 28th,” stated Bean.

“This will be our second trip to Cajamar, and the freshly renovated venue. The room is actually the perfect size for our footprint. I am constantly reminded of how lucky we are to have such a capable team in Brazil. Each event seems to better than the last, and they always create such professional experience for everyone involved. I am looking forward to what they have in store for our fans this January,” stated Bean.

“I am excited for the LFA to return to Brazil in 2023. We are looking forward to returning to Cajamar, and the Ginásio do Polvilho. We had a very strong event in November. We learned a lot, and have made a lot of improvments for future events. We will continue to build our relationship with the mayor Danilo Joan. His support and efforts have been invaluable to our success in the region. We will again be accepting donations of food in exchange for tickets to the event. The food will then be distributed to underprivileged families in the area.”

LFA 151 will be broadcast live at 6PM PST/9PM EST on UFC FIGHT PASS.

About GILA RIVER RESORTS & CASINOS:
Gila River Resorts & Casinos has been operating three locations in Arizona for over 25 years, all owned by the Gila River Indian Community: Wild Horse Pass, Lone Butte, and Vee Quiva. The resorts at Wild Horse Pass and Vee Quiva are Four-Diamond accredited. All three casinos offer a combination of slots, table games, poker and more, and are open 24 hours a day, 365 days a year. Additional information is available at 1-800-946-4452 or at PlayAtGila.com.

About GINÁSIO DO POLVILHO:
The Municipality of Cajamar, through the Department of Public Works and Services, coordinated the complete renovation of the entire structure of the Polvilho Gym. The restructuring of the space will provide significant improvements for the court to host the numerous competitions held throughout the year and also for the sports projects in various modalities that the City Hall offers free of charge to the population. For more info visit the Cajamar official website.